The Cervélo RCA is the brand’s lightest ever frame at an astonishing 667g (size medium, including paint and hardware). Equally astonishing is the price: $10,000. That’s for the frameset, not a full bike so, let’s be honest, none of us will ever be owning one of these, will we? Check out the skinniness of those chainstays. 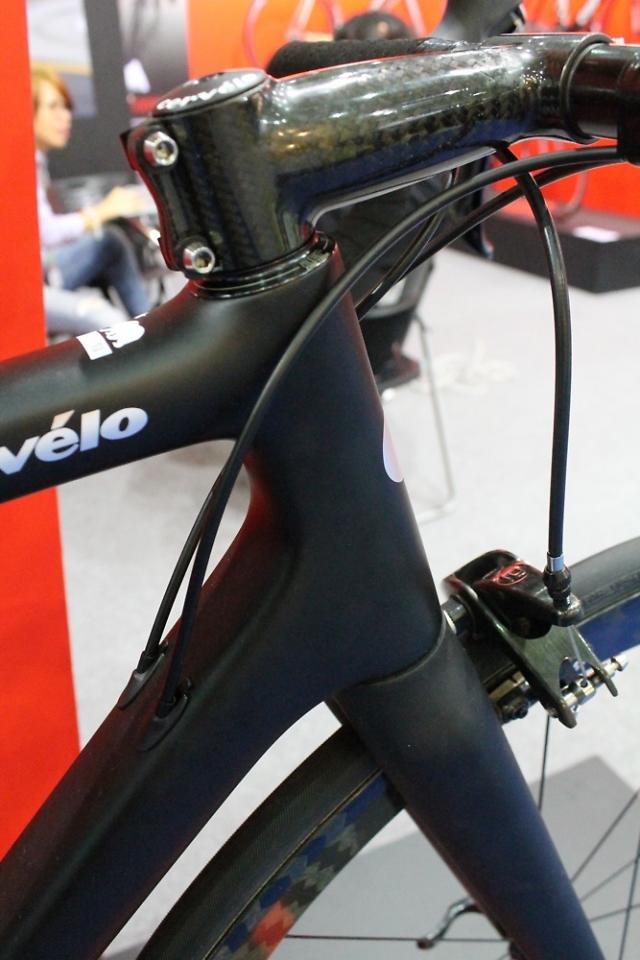 We told you all about Cervélo’s RCA when it was launched a coupe of weeks ago so check out that story for all the details, You can visit the RCA’s own microsite too. 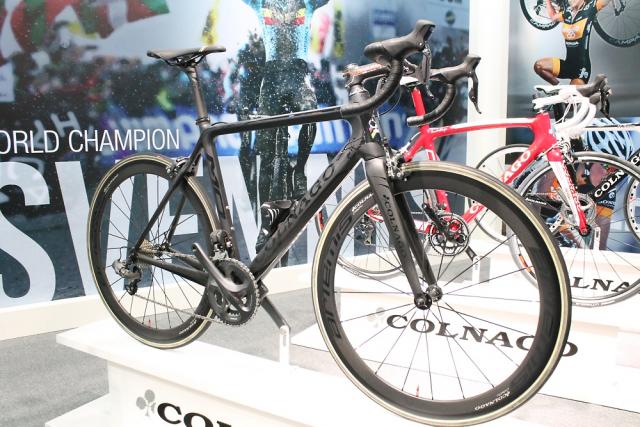 Equally black and with equally minimalist graphics, Colnago’s M10 sits at the top of the Italian brand’s range alongside the C59 Italia. It’s a carbon-fibre monocoque, clearly, and although this one is Di2ed up, the same frame will take a mechanical shift system. 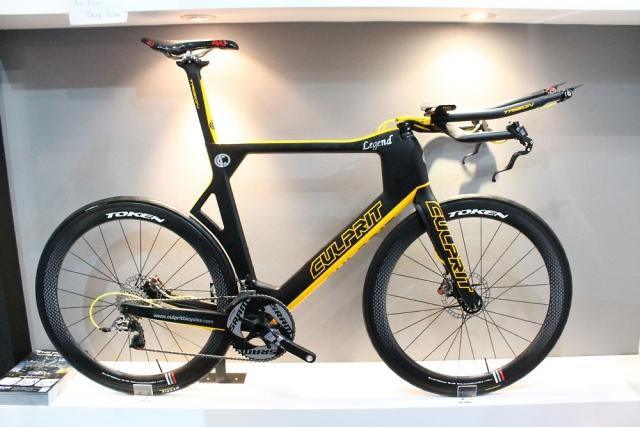 We wrote a whole story on the new Culprit Legend last week so click on the link to find out all about it. For anyone who hasn’t spotted it, the bike has no seatstays. We covered the Giant Anyroad bikes very briefly too. We didn’t go into too much depth because these models aren’t available outside of Asia. This Anyroad 2 is built up with Shimano Sora with TRP Lyra disc brakes. We’ve not got a clue how it rides but we’d love to give it a go. 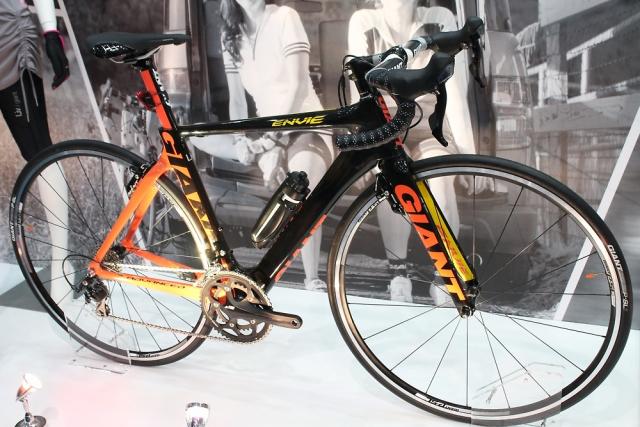 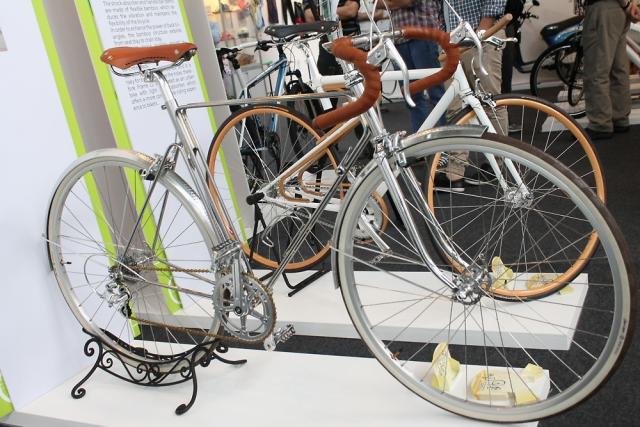 Ah, the Thin Bike! I'd forgotten about this one. This isn’t a production model, it’s a winner in the 2013 International Bicycle Design Competition, a project by iF Design. 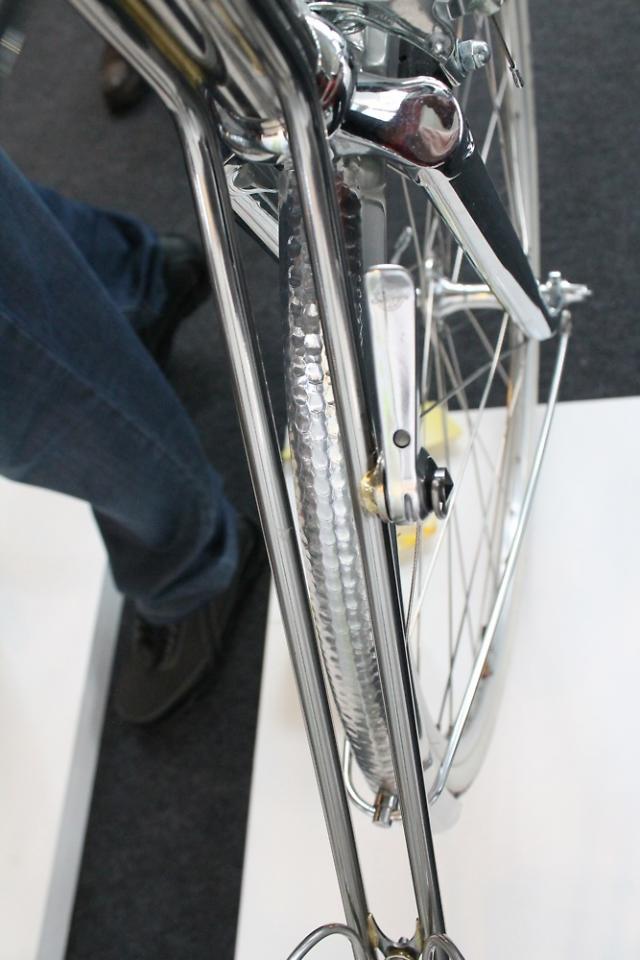 The Thin Bike was designed by Roger Rodriguez Bodi of Spain. Those tubes are as narrow as 1cm in diameter. It looks pretty darn cool, huh? We went to the launch of the new version of Merida’s Warp a few weeks ago so do the click thing for all the details on this one. In these colours, this is clearly the model that Team Lampre Merida will be riding this year. While we’re with Merida, here’s the brand spanking new Ride SL that Lampre Merida are riding in the Classics. If you missed our previous story, one of the key features is the fork that contains an internal carbon spring clip and elastomer wedges to smooth the ride. It’ll be released to the public later in the year. 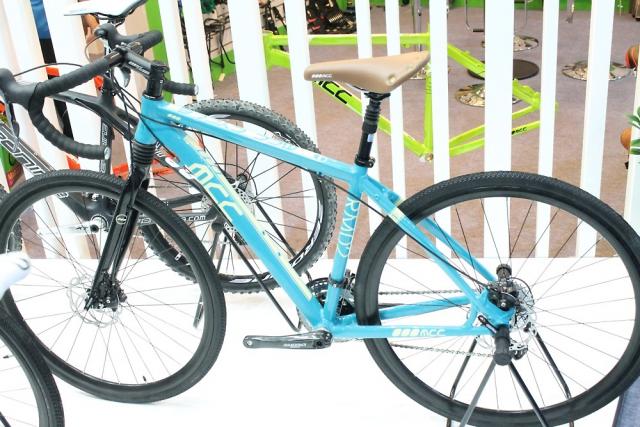 What do you know about MCC? They play cricket, right? Well, turns out they also make bikes (although I suppose there’s the slightest of chances it might be a different MCC). 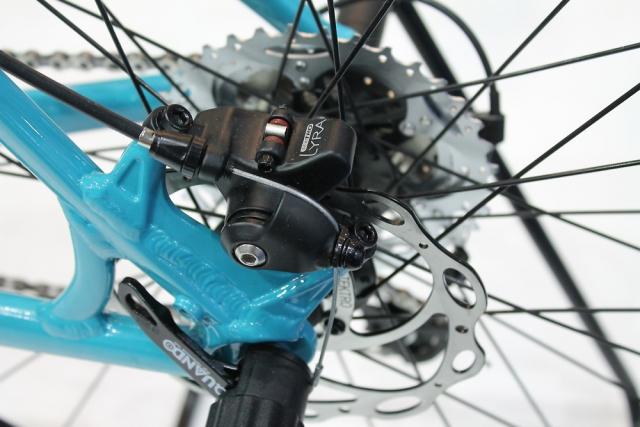 Anyway, check out the RM02 with chunky tyres, disc brakes, a shock up front and a suspension seat post. It’s a ker-azee combo but it might just work. 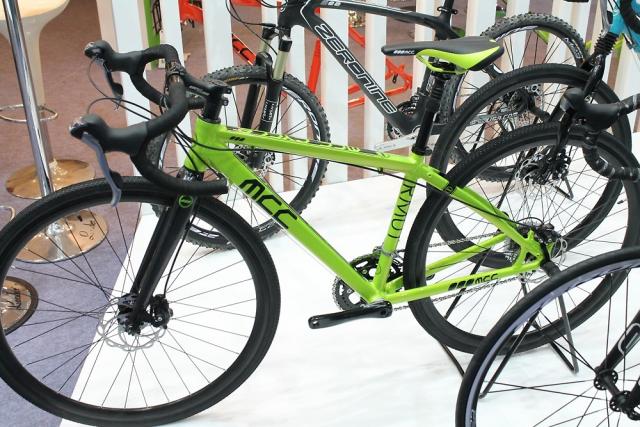 The RM01 is a similar design but without the shock up front. While we’re about it, I have a vaguely related picture to show you. Talk among yourselves while I go and find it… Te-tum-tum-tum… 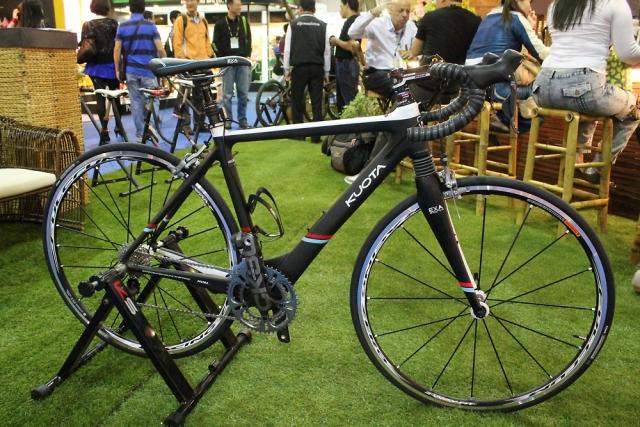 Here you go! What do you make of this? This is a Kuota KOM that has been modified (Kuota haven’t produced the bike like this) with another headshock and a KS LEV dropper post. 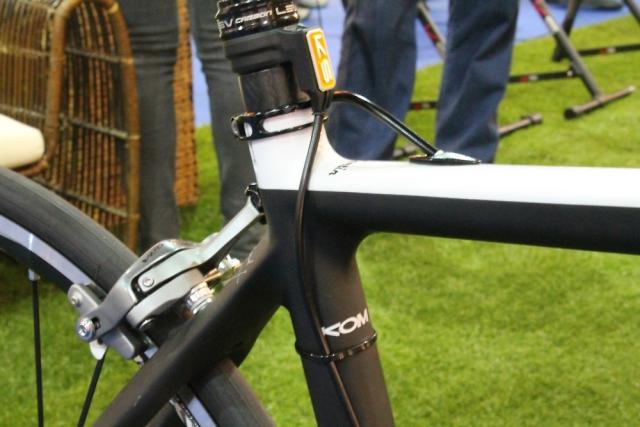 You get a remote switch on the bars to adjust the saddle height. Interestingly, the bike is fitted with standard road wheels and tyres, so I’m not sure in what circumstances you’d want that post. Anyone? 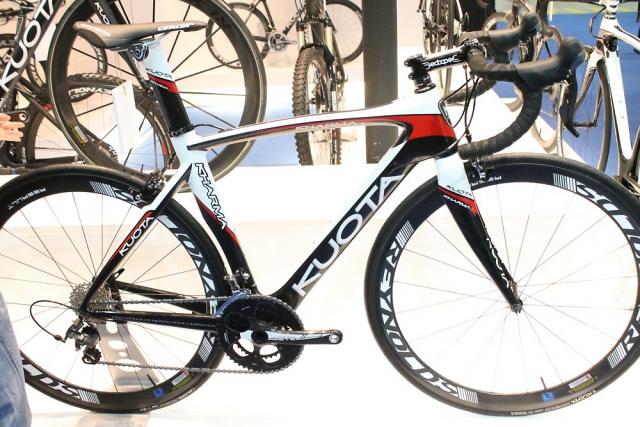 Speaking of Kuota, this is their Kharma Evo that has been completely redesigned for 2013. It now gets a taller head tube than before along with a full-carbon fork. The top end K-Uno is a pretty cool looking bit of kit too. 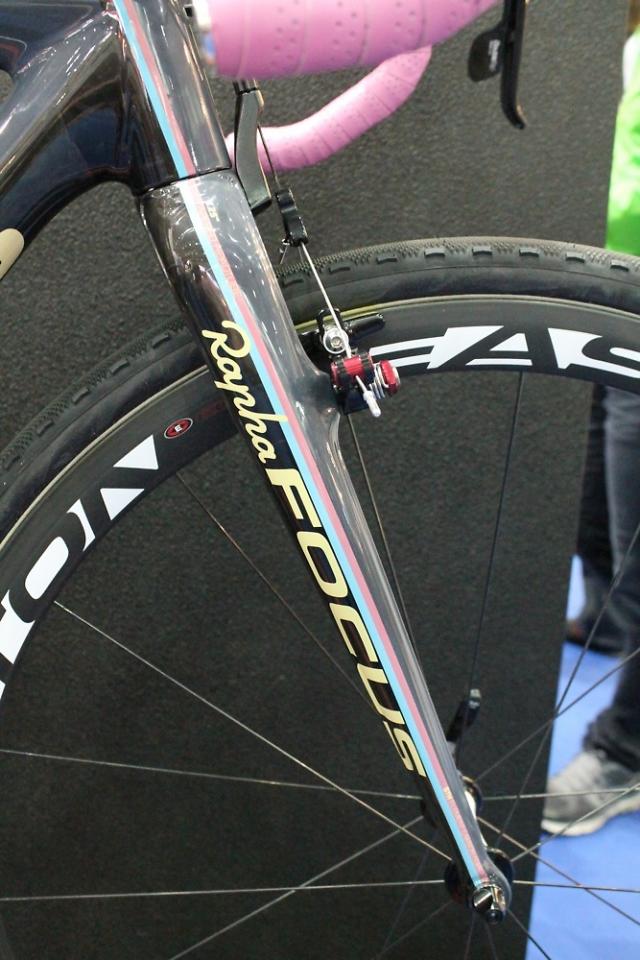 Admittedly, that pink bar tape isn’t going to look so good after a few muddy cyclocross races, but who cares? It’s a really neat design. 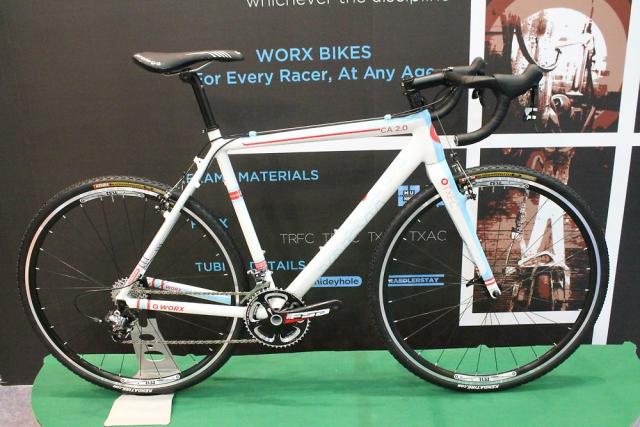 Last week, we told you briefly about the new range of bike that’s on the way from British brand Worx, although they’re a few weeks away from being released.  Here’s another cyclocross bike from the range to whet your appetite. They’ve got the styling spot on, if you ask us. As you can read on the top tube, this is the alloy CA 2.0 that’s built up with a SRAM Force groupset. We’ll sling more details your way when the bikes are ready to sell. In the meantime, you can you can follow worxbikes on Twitter while the website is being finalised. 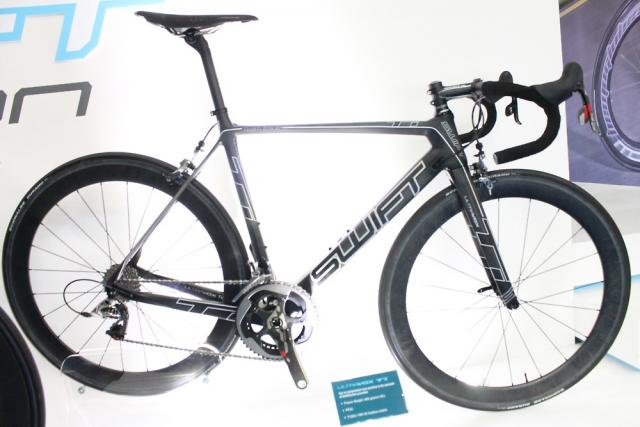 There’s a new bike on the way from Swift and although we were allowed to see it, they didn’t want us taking any photos yet, so for the time being you’ll have to make to with pics of the existing Ultravox Ti. 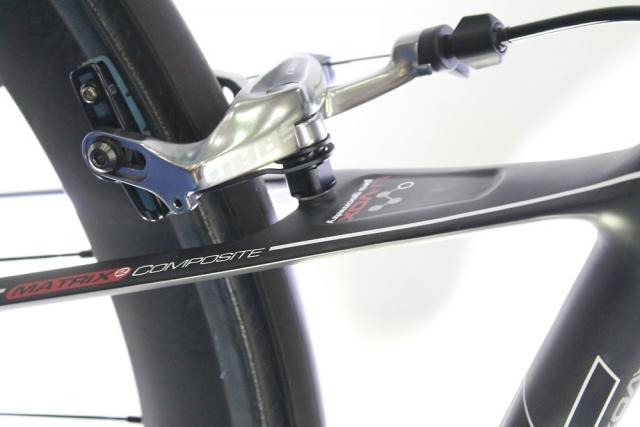 This is the top-level road bike in the range, built around a sub-900g T1000 carbon fibre frame. Go to www.swiftcarbon.com for all the details. The Fuji Track Elite is brand new for 2013. It’s made from ultra-high modulus aero carbon tubing and it’ll set you back a not inconsiderable £3,500 from Evans Cycles in the UK. If you think that’s pricey, it was £4,400 before. Oval, by the way, are now owned by Fuji which is why you’ll see their components all over Fuji bikes.