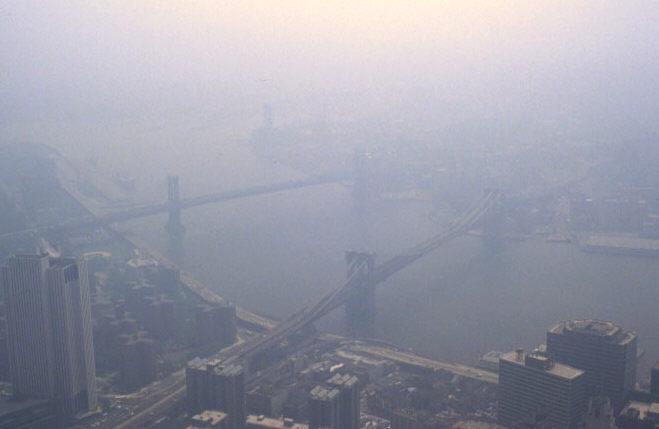 Smog over NYC… blame the cyclists…

Republican representative says his remarks, which met with mixture of mirth, incredulity and furore, were "over the top"...
by Simon_MacMichael

A politician in Washington state has apologised for comments he made last week saying that cyclists’ heavy breathing causes air pollution, acknowledging that his phrasing when he said that cyclists were partly responsible for climate change because of their heavy breathing was “over the top.”

Republican party Representative Ed Orcutt, perhaps trying to exact revenge for all those jokes about politicians being responsible for global warming due to the amount of hot air they generate, made his initial comments in an email last week.

The email was sent in reply to local bike shop owner Dale Carson, who had criticised a proposal to levy a fee of $25 on the sale of all bikes in the state costing $500 or more as part of a wider $10 billion package relating to transport, reports the Daily Astorian.

Orcutt told Carson, who had written to more than 30 state politicians, that cyclists should pay their share of the cost of building and maintaining roads, because "the act of riding a bike results in greater emissions of carbon dioxide from the rider. Since CO2 is deemed to be a greenhouse gas and a pollutant, bicyclists are actually polluting when they ride."

His remarks provoked a mixture of mirth, incredulity and furore. Jonathan Maus, editor of the Bike Portland.org website in neighbouring Oregon, wrote to Orcutt  to ask him to clarify his comments.

Today, Bike Portland published his response, in which Orcutt, who studied science at university and was a forestry consultant before he entered politics, issued an apology for his statement about carbon emissions and agreed that his comments had been “over the top.” He went on to say:

"Although I have always recognized that bicycling emits less carbon than cars, I see I did a poor job of indicating that within my e-mail. My point was that by not driving a car, a cyclist was not necessarily having a zero-carbon footprint. In looking back, it was not a point worthy of even mentioning so, again, I apologize – both for bringing it up and for the wording of the e-mail.

"Second, please understand that I have not proposed, nor do I intend to propose, any tax – and certainly not a carbon tax – on bicyclists. There is little in the Democrat tax proposal that I support. However, the one aspect of the Democrat tax plan that has merit is their proposed $25.00 tax on the purchase of any bicycle $500.00 or more. I am willing to consider this because I’ve heard requests from members of the bicycle community that they want more money for bicycle infrastructure. The idea of bicyclists paying for some of the infrastructure they are using is one which merits consideration."

In Washington state, construction and maintenance of roads is largely paid for out of general taxation, with revenue raised from sales tax on gasoline representing only a tiny proportion.

The $10 billion proposed transportation funding package foresees increases in the gas tax every five years until it hits 50 cents a gallon – according to our calculations, that's still less than a sixth the amount most UK motorists would currently pay for the same amount of fuel.

However, just 0.01 per cent, $1 million, of that $10 billion is anticipated to be raised through the bike sales levy.

Arguments raised against it include that everyone pays for the roads, 19 out of 20 adult cyclists in the US also owning a car, that more people cycling saves local councils money in the long run, and that bike retailers would suffer.

That leads back to the man who had originally asked Orcutt his opinion of the levy, the bike shop owner Dale Carson, who according to the Daily Astorian said that while he welcomes the politician’s apology, he believes that Orcutt’s opinion "still seems way out there."

"Cycling has so many positive attributes to society," stated Carlson, who owns and runs three bike shops. "It should be encouraged and not discouraged."

Paleoclimatologist Dr Lonnie Thompson, who together with his wife runs the Byrd Polar Research Center at Ohio State University, described the politician’s thinking as "crazy."

Dr Thompson added: "We have to breathe whether we're riding a bike or not," and also made the point that a full gas tank with a capacity of 12 gallons will have resulted in the release of 314 pounds of carbon dioxide once it has been emptied.