This is the Cervélo P5 time trial bike belonging to Tyler Farrar of Team Garmin-Sharp.

We’ve covered the P5 a zillion times on road.cc since we went to the launch at the beginning of last year, and we looked in detail at Dave Zabriskie’s P5 at the Tour de France so we won’t go into much depth about the frame here – follow the links if you want to know more. 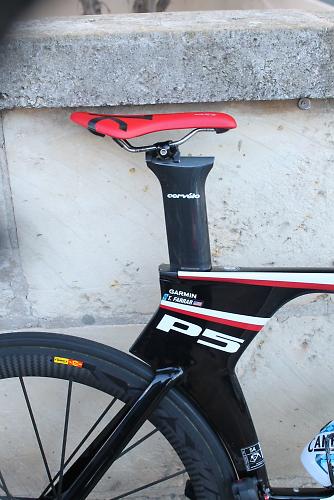 Farrar has the moveable clamp on his seatpost positioned as rearward as possible, and he has his Fizik Ares time trial saddle pushed as far back as the saddle rails will allow, effectively reducing the seat angle. 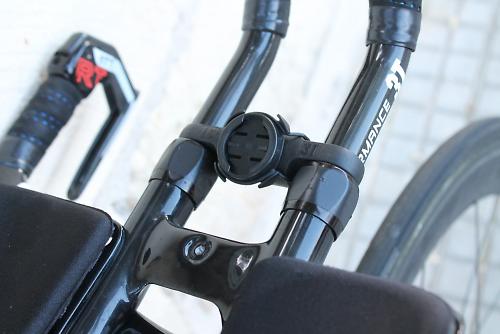 Up front, the Team Garmin Sharp riders use a 3T computer mount bridge between the aero bar extensions, with a Garmin Edge mount attached, as usual, with rubber O-rings. 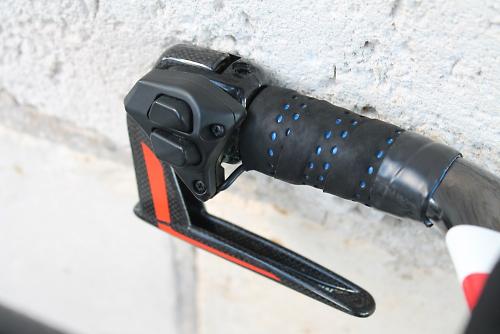 Garmin Sharp use Shimano Dura-Ace Di2 groupsets with Magura RT8 hydraulic rim brakes, originally designed specifically for the P5. The riders can shift gear from the ends of the aero bar extensions, as usual, but there’s no Di2-compatible Magura brake lever available yet to allow them to shift from the base bar when riding out of the saddle. The team has had to innovate – a shift unit has been stuck to the inside of the right hand lever to allow gear changes via the rear mech. 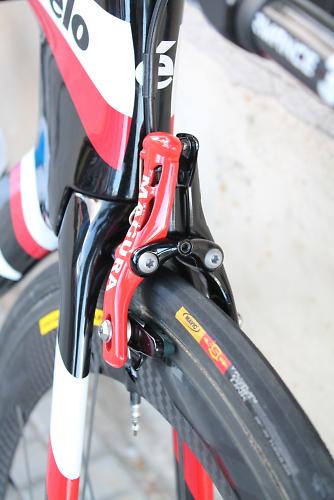 Rotor provide the chainsets for Garmin Sharp. These are the Flow aero cranks that the Spanish brand introduced last year, but without the usual graphics – the graphics here are actually the same as on the Flow cranks that Rotor showed us at the launch. 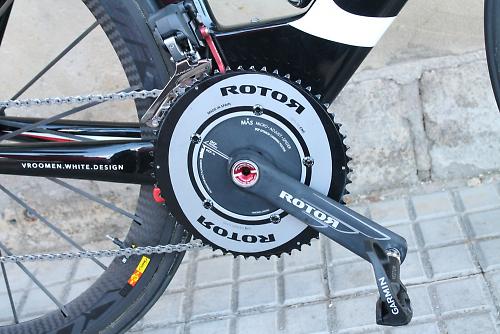 The cranks were developed in collaboration with Garmin Sharp and Rotor reckon they can save you around 6secs in a 40km/25-mile time trial if you’re averaging 200 watts. They also claim they Flow cranks are significantly stiffer than other aero options out there. Our man Dave Arthur has a set in on test at the moment so stay tuned for a review.

Farrar opts for round rather than oval rings. Admittedly, these look oval because of the graphics, but they ain’t. Rotor obviously firmly believe that their Q-Rings will benefit everyone in terms of power output and reduced strain, but they cater to skeptics with their NoQ rings. This is a 54T chainring on Farrar’s bike. 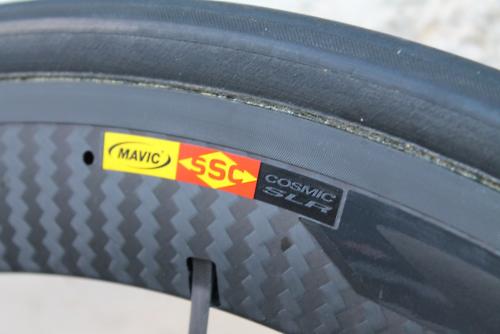 The wheels are from Mavic. They’re Cosmic Carbone SLRs for tubular tyres, with 52mm-deep rims. The alloy braking surface is given an Exalith 2 chemical treatment to increase durability and improve all-conditions braking. Mavic claim the front wheel weighs 725g while the rear is 870g. They’re fitted with Mavic’s own Yksion tubs.