You might have read on road.cc that Garmin-Sharp had 16 new Di2-equipped Cervélo R5s stolen from the Tour Méditerranéen, but here’s one that the thieves didn’t get. Some team members are training on Majorca at the moment, and this is the bike belonging to US rider Caleb Fairly.

Fairly has ridden for HTC-Highroad and SpiderTech-C10 in the past, and even by pro cyclist standards, he’s small – 58kg, according to Garmin-Sharp’s official stats. That’s 128lb, or 9st 2lb.

Garmin-Sharp use the Cervélo P5 for time trials, and either the S5 or the R5 for road stages. The S5 is the aero road bike whereas the R5 is designed to be lightweight and also stiff and strong. It features what Cervélo call their Squoval tube shapes (square/oval) – check out the top tube and you can see why they gave it that name. It’s designed to minimise flex. The same is true of the wide BBright bottom bracket, which is Cervélo’s own standard, and the tapered head tube. Cervélo go with a 1 3/8in lower bearing, splitting the difference between the 1 1/4in and 1 1/5in bearings that most other brands use on their high-performance road bikes. Another notable feature of the R5 is the skinniness of the seatstays: Cervélo call them Ultra Thin Seat Stays, reasonably enough. They’re incredibly slender in order to flex a little to add comfort. Another benefit is that less material keeps the weight down. 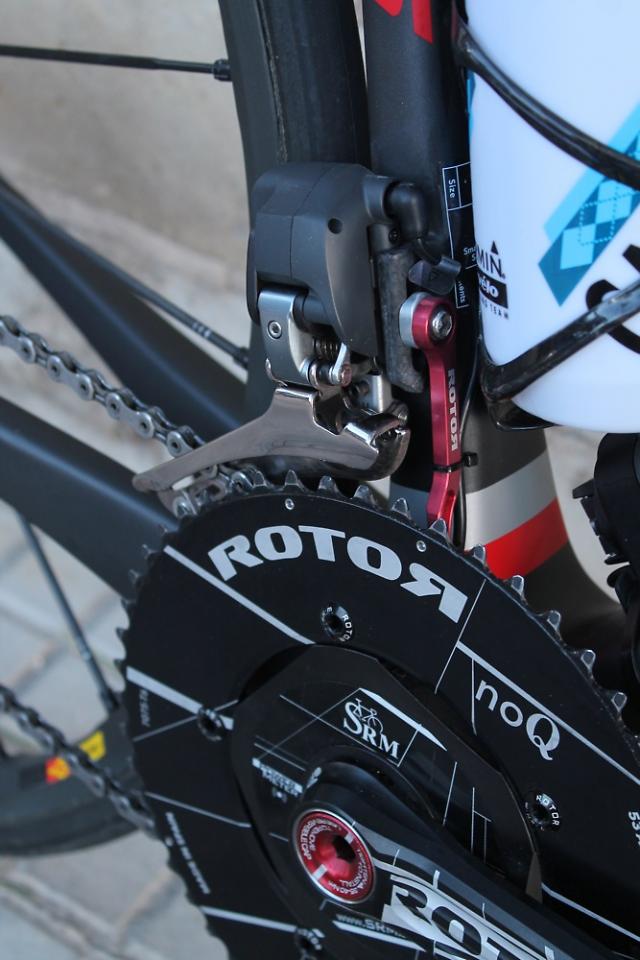 The Garmin-Sharp bikes are built up with Shimano groupsets. The Dura-Ace Di2 junction is zip-tied under the stem and that’s a mount for a Garmin Edge computer on the top. As you can see, Fairly doesn’t run any spacers above the headset. The pros just love to slam that stem. Cockpit components come from 3T. As you can see, that’s an Ergosum Pro handlebar on there. It’s made from triple-butted 7050 aluminium and has a shallower drop than normal (128mm). 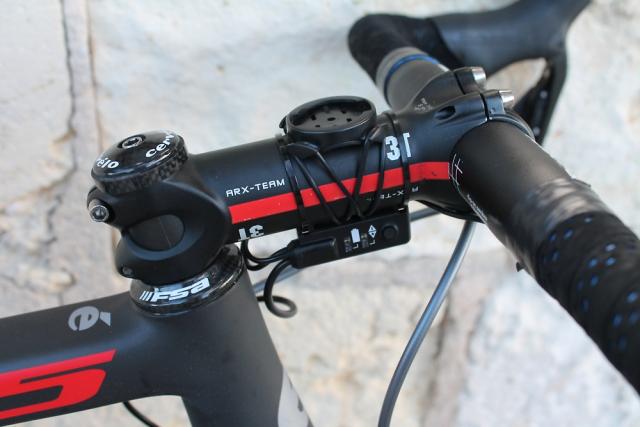 The stem is an ARX Team, Fairly, like many other pros, preferring to go with aluminium rather than carbon – it’s AL 7075 T6 with titanium bolts to keep the weight low. The seat post comes from 3T too; it’s a carbon Doric Ltd with a composite clamp and titanium bolts. The saddle is from another Italian brand, Fizik. This is an Antares with K.ium steel rails rather than a more expensive carbon-railed version. 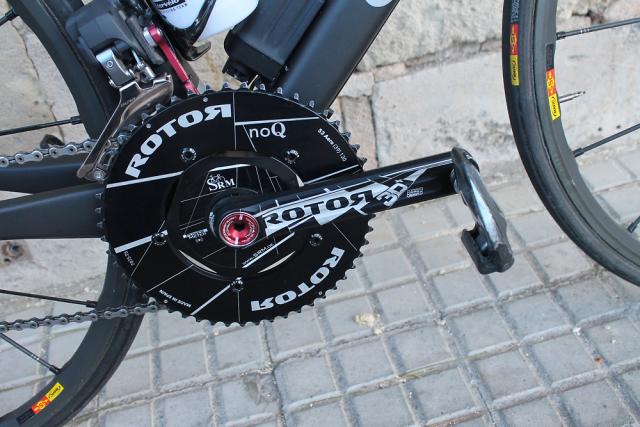 The chainset is from Rotor although those are NoQ round chainrings round rather than the ovalized Q-Rings for which the Spanish brand is most famous. The 3D+ aluminium cranks are drilled out to save weight and this setup uses an SRM PowerMeter, which is bar far the most represented power measurement system in the peloton.

Those are Garmin’s Vector pedals on there. Garmin have been working on these power-measuring pedals for ages now but we’ve not heard a dicky bird about them in a while. They’re clearly not working to the required standard yet, hence the lack of a sensor and the presence of the SRM system. The wheels are Mavic’s R-Sys SLRs which weigh in at 1,295g the pair, according to Mavic. They come with carbon-fibre spokes and the aluminium rims have been given Mavis’s Exalith 2 treatment. This is a chemical process that, Mavic say, increases durability and shortens braking by 18% in wet conditions. The machined rim surface makes a unique sound when you apply the brakes – halfway between a hiss and a buzz.

1
Top American gravel racer shot dead in Texas
2
Cornwall Council to review “disaster” cycle paths scheme
3
Near Miss of the Day 767: MGIF driver cuts across cyclist at speed on roundabout
4
“Maybe the easiest race I’ve ever done”: Pros enjoy relaxing Giro d’Italia stage six… but could you have kept up?
5
Near Miss of the Day 768: Driver squeezes between two cyclists – but only receives warning letter as rider didn’t “swerve”
6
What happens if you put a giant propeller on a bike? Plus new stuff from Rapha, Campagnolo, Ritchey, Selle Italia, Lezyne + more
7
Cyclist arrested after police force rider off M3 motorway
8
Just In: check out Classified’s super-innovative Powershift drivetrain