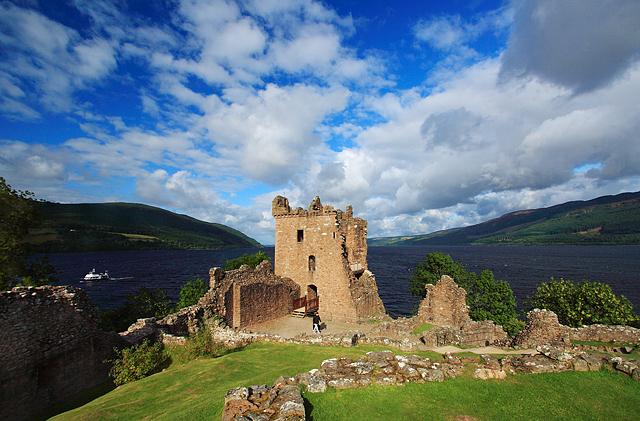 Great Glen NCN route gets three quarters of £3.9m funding... but should money have been spent on lowland roads instead?
by Simon_MacMichael

The Scottish Government has revealed how it plans to spend the £3.9 million it announced before Christmas was being given to cycling – and earlier celebrations at the award will be tempered by the news that more than three quarters of it will go on a route that will be of greater benefit to leisure cyclists and visitors from outside Scotland rather than cycle commuters living in the country’s major population centres.

The route in question will form part of the National Cycle Network (NCN) and runs from Oban, population a little over 8,000, to Inverness, home to around 60,000 people; the only major population centre on the route, which should be a little over one hundred miles long as it goes through the Great Glen, including skirting the shores of Loch Ness, is Fort William, which has around 10,000 residents.

The former Great Glen Cycle Route was dismantled in 2006 and while cyclists do use the Great Glen Way, primarily intended for walkers, it is unsuitable for road bikes. According to the Great Glen Way’s website, the alternative route, the A82, is best avoided as a leisure route due to heavy traffic including lorries carrying timber.

While the result of the new investment will no doubt be one of the most scenic parts of the NCN, some may find it difficult to see how the investment it aligns with the Scottish Government’s stated aim of getting 10 per cent of all journeys in Scotland made by bicycle by 2020, and will argue that the money could have been better spent elsewhere.

Prior to Christmas, Spokes, the Edinburgh and Lothians cycle campaign, had welcomed news that Scottish Finance Minister John Swinney had committed that £3.9 million to cycling, although at that point there was no hint of how the cash would actually be spent.

As Spokes pointed out at the time, the amount secured for cycling was seen as something of a coup and followed lobbying by its members, including Alison Johnstone, MSP for Lothians, who together with fellow MSP Jim Eadie, who represents Edinburgh, met Mr Swinney to plead cycling’s case.

The Scottish Government had been awarded £22 million by Chancellor George Osborne in his autumn statement, less than a third of the £74.9 million it had been seeking; crucially, however, that latter figure included £3.9 million for cycling, the exact amount that Mr Swinney subsequently confirmed he was making available, which Spokes at the time hailed as cause for celebration.

In reality, however, the money will have only minimal impact on the area that Spokes, Scotland’s largest regional cycling campaign group, covers.

Besides that £3 million for the Oban to Inverness NCN route, which also includes a spur from Appin to Oban, £400,000 will go on improving cycle parking at schools throughout the country. The other £500,000 will be spent on improving access to stations, some in West Lothian, on the new Bathgate to Airdrie rail link.

Announcing the details of how the money will be spent, Scottish Transport Minister Keith Brown said: “2012 has been a fantastic year for cycling in Scotland with our Olympic successes and this has led to a huge surge in interest in cycling both for recreation and as a way of getting around.

“So as we enter 2013 and more people think about taking up cycling with the fitness, financial and environmental benefits that brings, I am pleased to be able to announce this funding to help improve cycling infrastructure for tourists, commuters and schoolchildren in areas throughout Scotland.

“In the Highlands and Argyll & Bute, we are committing £3million to fast track the National Cycle Network route 78 between Oban and Inverness.

“The £2.6million Connon Ferry to Inverness section will be managed by Transport Scotland in partnership with Highland Council and will deliver much-needed safe cycle routes linking remote communities and taking cyclists off the trunk road network by 2015.

“The Great Glen cycle path will be an iconic route which will boost the local economy through the additional tourism in an area which already attracts over 20,000 spectators to the World Mountain Bike Championship [actually, a round of the World Cup – ed] each year in Fort William.

“We are also committing £400,000 for the Oban to Appin cycle route to link a remote community off the main Oban to Fort William section of the larger route.

“Half a million pounds will go to improving access to stations on the successful Airdrie to Bathgate railway and contribute to the “greening” of the route currently being taken forward by Central Scotland Forest Trust.

“And £400,000 will be spent on increasing cycle parking at schools, helping encourage more kids to cycle and linking to the Community Links programme delivering safe routes to schools throughout Scotland.”