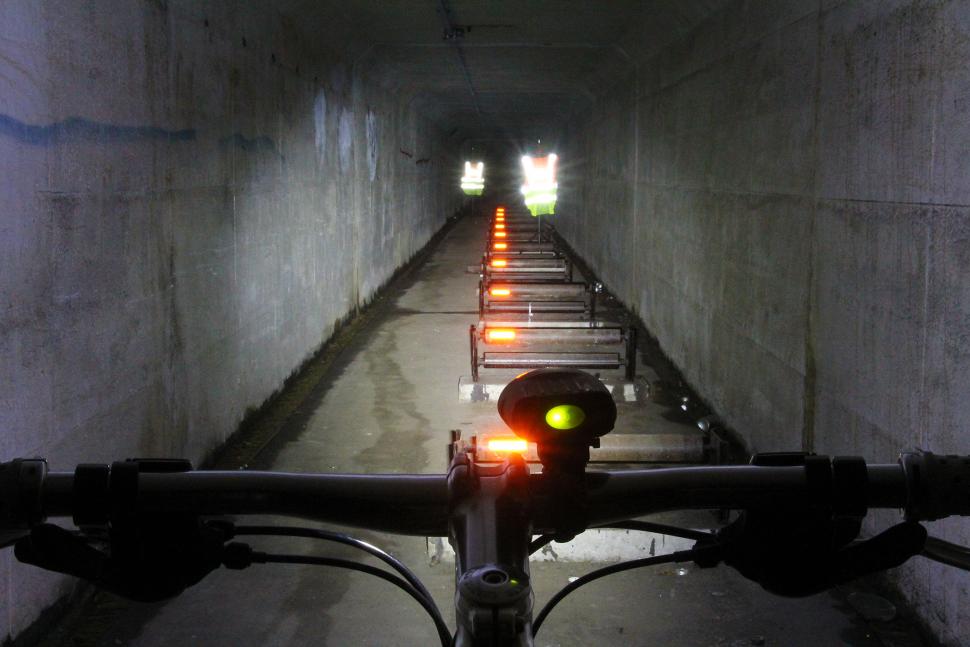 we've been in a tunnel with 41 of this year's front lights and the results are in.....
by dave atkinson

Well, here we are again. Waking up in the dark, riding home in the dark... it's lights time.

We've been busy getting some of this year's crop and the reviews will be going up through the winter. In the meantime, however, we thought we'd share our beam testing data with you so you have something to be going on with. We took all the lights that came into the office before the Big Test deadline – about 40 of them – and put them through their paces. The great thing about lights is that it isn't just subjective: you can measure the beam and take directly comparable photos of what it looks like, so we did. The results are available in the big road.cc light comparator at the bottom of the page. Rear lights are coming soon.

What did you do?

We've collected lots of beam data so you can compare and contrast the different lights. Light manufacturers use a number of different metrics to describe light output. Top of the pile right now is lumens, which is a measure of the total output of the light across the whole beam. Some cheaper lights use candlepower, candela or lux, which are measurements of the brightest part of the beam at a set distance. We've used lux here, but measured at a number of points across the width of the beam. That gives an indication of the brightness of the beam at the centre, the amount of peripheral light and the throw of the beam. Specifically, we measured the lux value of the beam at two metres distance, in 10cm increments from the centre of the beam to 1m from the centre, giving eleven readings.

This year we've also included data on the shape of the beam. Putting the brightest part of the beam at the centre, we measured the output at thirty-degree increments around the beam, at a distance of 50cm from the centre. That gives you a good idea of the pattern of the beam; most are more or less round, but some have more interesting characteristics.

To get a good idea of what the beam looks like, we set up a bike on a rig so that we could photograph the beams of all the different lights in a comparable way. We used a tunnel this year, because it has the advantage of always being dry and pitch black down there which means that we should be able to more easily add to this test when more lights come in; last year we found with outdoor shots that replicating the rig wasn't easy, as different conditions above gorund mean differing levels of ambient light and reflection from surfaces, even in the same spot. Each of the beam shots you can see above was taken using the same settings on the camera. Specifically, they're all shot from directly above the saddle, using a 28mm lens on a Canon EOS1100D (effective 45mm), shooting for 2s at f22 on ISO3200. If you fancy doing some of your own. So as much as they can be, they're directly comparable to one another. If one looks brighter than another, that's because it was. The two reflective jackets are at a distance of 15m and 30m, respectively, from the light. The reflective strips down the centre are at 2.8m intervals.

Is that it, then?

No, of course not. You can look through out Buyer's Guide for more information on what kind of lights will suit your riding. A super-bright beam isn't much use if the light ends up in a hedge after the first pothole, or fizzles out when it starts raining. We'll be subjecting all the lights to the rigours of the road.cc testing process and when we're happy that we've thrashed them they'll each get a full review. We'll include the comparison tool in each review too. In the meantime, we thought you'd like to see how they fared.

Firstly, light beams follow an inverse square law regarding the strength of the light at increasing distance, because they're illuminating a two-dimensional plane. So at twice the distance, the light beam is spread over four times the area. Consequently, a light that is measured as twice as bright at its centre won't let you see twice as far. The logarithmic scale produces a more realistic comparison because of this.

A word about the non-circular beam patterns

Some of the lights on test don't have a uniform circular beam pattern, with more light along the centre of the beam. Because of this, the beam values on the long graph are a bit inflated because there's more light concentrated in the axis we're measuring, and less illuminating the tree canopy. It doesn't skew the data hugely though, and the beam graph in conjunction with the beam shot  and beam shape should give you the whole story.

The comparator is below. Have fun!