This is the bike that Bradley Wiggins rode to victory in the Olympic time trial yesterday, and it's not the Pinarello Graal that he used in the Tour de France last month.

In our Olympic time trial preview yesterday we made a few predictions about the bikes the main contenders would ride. While we mostly got them right, we incorrectly guessed the identity of Lizzie Armitstead's bike. She rode a Cervélo P4, rather than the newer P5. Oops!

We did get the identity of Bradley Wiggins' time trial bike correct however. We'll allow ourselves a little pat on the back for that. In the time trial, as in the road race last Saturday, Wiggins opted for a UK Sports designed bike.

Is the UK Sports bike faster than the Graal? We don't know, but we can't see that Brad would have opted for a slower bike in his quest for gold. It's got some serious credentials, as it was British Cycling's own exact specifications for the all-conquering track team. It first appeared in 2002 and was used so devastatingly in the 2008 Beijing Olympics. 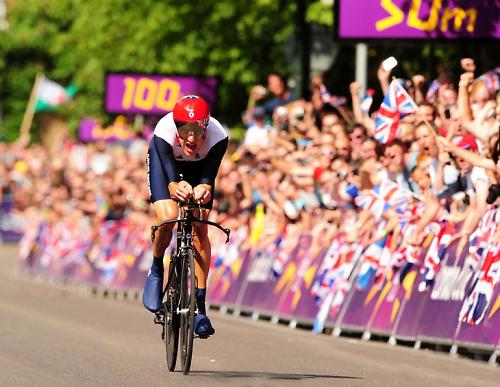 As we saw in the Tour de France, the Pinarello Graal is clearly no slouch so we'd love to know the exact reasoning behind Wiggins' choice of bike. Let's be honest, the way Brad is riding at the moment the bike probably wouldn't have made the biggest difference, but you don't win medals and races thinking like that.

Here's the UK Sports own Aero Road/TT frame, as it is listed on their website. The compact and very aerodynamic frame is the same as used in the road race, with the obvious change of handlebars. From looking closely at the frame, it's clear it draws on the very latest aerodynamic studies; there's the low front-end to minimise the frontal area, the air foil shaped down tube and seat tube, slender top tube and aero seat post.

Other details to minimise turbulence are the internally routed cables, internal seat post clamp – most likely an internal wedge clamp like found on BMC's bike – and skinny forks and a 1in steerer tube.

Each frame is made by hand in the UK and both frame and fork comply with the UCI regs. That also means that they're available to purchase. How much a frame costs, and how readily available they are is information we're working on getting. Weight for the frame is claimed to be in the 1kg region.