The result of 'marginal gains', Wiggo's bike is an example of attention to detail...
by David Arthur @davearthur

'Marginal gains' is the oft quoted principle at the heart of Dave Brailford's five year plan to put a British rider atop the Tour de France podium. That plan succeeded ahead of schedule last weekend when Bradley Wiggins historically won in Paris.

This meticulous approach is exemplified in the bike that Wiggins raced through the three week race, and races earlier in the season. What is the kit that Brad relied on to clinch the first British Tour de France victory? Let's take a closer look at the key components that graced his bike throughout the race. Frame and fork: Pinarello Dogma 2. Much has been said about the Italian company's flagship model that the team have relied upon since their inception three years ago. Interestingly, Sky didn't ride the  new and lighter Dogma 65.1, announced just before the Tour, in the race, instead relying on the proven Dogma 2.

Wiggins did however roll into Paris on the final stage aboard the new model. And, as is tradition, the frame was custom painted to match the yellow jersey. Of course. In a stylish touch the inside surface of the forks and rear triangles were painted black though. 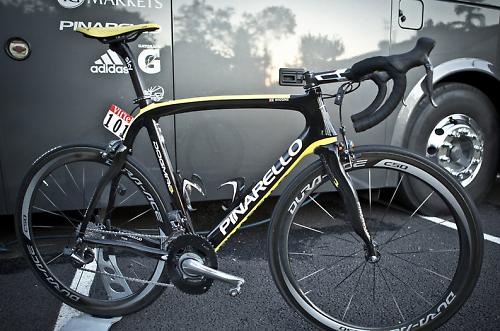 Drivetrain: Shimano Dura-Ace Di2.While sky were involved in the development of Shimano’s new 11-speed groupset, it seems that they didn’t immediately adopt it. In fact, Wiggins favoured the 10-speed electronic groupset for the entire race, save for the final stage into Paris when he rode the newer groupset. This could be because Sky prefer to use equipment with a proven track record, and also because the Mavic neutral service support doesn't yet cater for the new 11-speed groupsets. Sky playing it safe then. Bottom bracket:  While most top-end frames are using press-fit bottom bracket assemblies, the Dogma still uses a good old external threaded bracket. Which means there's scope for a spot of customisation, and that looks like the case on Wiggo's bike. We've heard rumours Brad uses upgraded ceramic bearings in his for a little extra gain.

Chainrings: O.Symetric chainrings. Here's the biggest departure from most of his team. Wiggo has been a fan of the non-round chainrings for a while now, and with them being proved in the toughest race, we'll probably see a spike in the number of O.Symetric equipped bikes rolling around the roads of Britain. 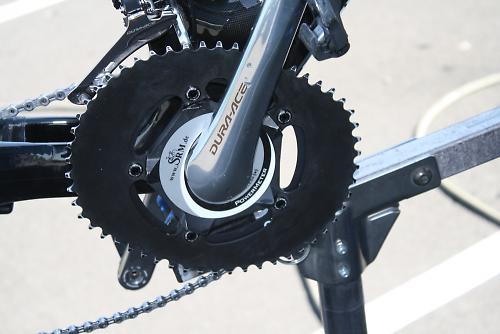 Non-circular chainrings aren't a new development, they've been around a long time. While some riders clearly favour them – we've seen a gradual increase in their adoption in the past few years – they've never really been a widespread hit. The theory behind them is sound though. They attempt to remove the dead spot at the top and bottom of the pedalling stroke by reducing the the effective size of the chainring at these two points.

Proponents claim significant increases in pedalling efficiency, and they clearly worked for Wiggins (and Chris Froome). 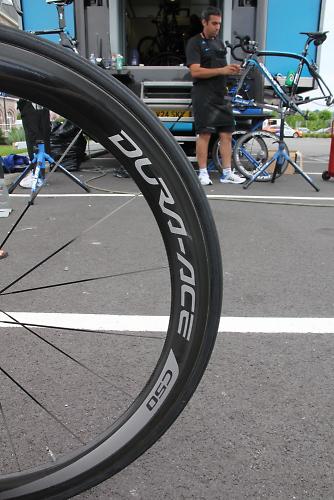 Wheels: Shimano/Various. It's hard to say with too much certainty just what wheels the team rode. Their official wheel sponsor is Shimano and many of the team were spotted on the company's C50, a 50mm carbon fibre deep-section wheelset. However there's much speculation about some of the unbranded wheels seen on Wiggo's Dogma and his Graal time trial bike throughout the race.

Wheels with Hed rims, Chris King and Tune hubs were spotted, suggesting that Sky isn't afraid to seek out the best kit, regardless of sponsorship responsibilities, if they think it'll give them a marginal gain. This is nothing new, we've seen many riders and teams over the years riding unbranded wheels in the search for extra speed.

For the final stage is was keeping the sponsors happy and Shimano's new C50 wheels with the new 9000 hub were used, with matching decals. Of course. Cockpit: Team Sky use Shimano's Pro line of handlebars, stems and seatposts to equip their Pinarellos and there's enough choice for them to find a bar shape that suits. Bradley opts for a Vibe 7S aluminium handlebar (we see a lot of riders using aluminium over carbon in the Tour) with a Pro PLT Carbon Composite stem and matching seatpost. Tyres: Brad's bikes were spotted with Veloflex Sprinter and Record tubular tyres through the race. Veloflex is a relatively small tyre company based in Italy where its range of tyres are handmade, and are well respected by those in the know. The Record is their lightest offering at just 180g with a 350tpi construction. 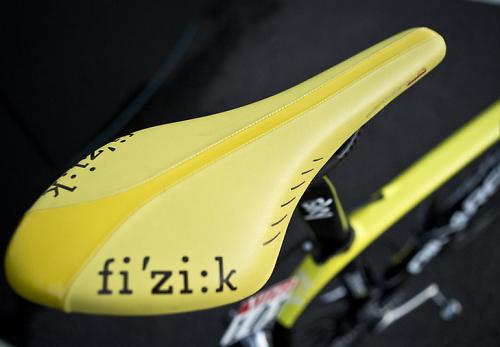 Saddle: A Fizik Arione. It's one of my favourite saddles, and it's used by Wiggo as well. About the only thing we have in common, then.

So there you go, you now know what kit Bradley used to win the biggest race in cycling. Will Pinarello soon offer a Wiggin's replica team bike? We're not sure, but we would imagine there is demand there for one, and they would certainly be snapped up.

Thanks to TeamSky.com for the photos.