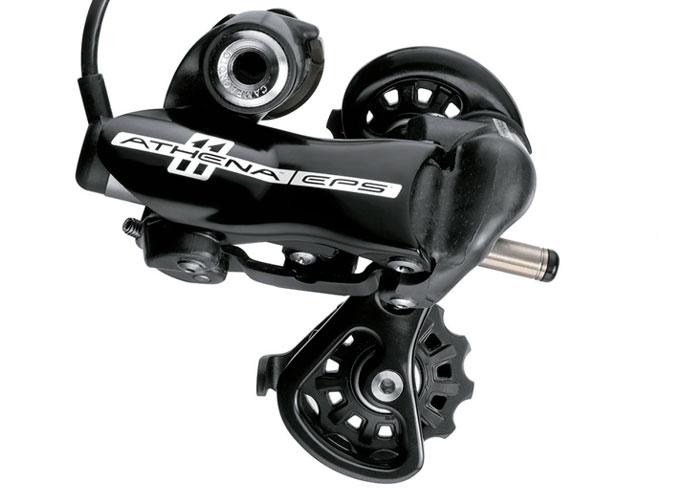 Campagnolo have been busy trickling their EPS technology down to a more affordable level, and yesterday they announced that EPS will be available as an Athena groupset. They've missed out Chorus and gone straight for their entry level 11-speed groupset in an attempt to go head to head with Di2 and get the equipment specced on 2013 bikes.

We don't have masses of information on the groupset at the moment; what we can tell you is that, like Shimano when they released Ultegra Di2, the new EPS gear uses slightly different technology to the Record and Super Record EPS groupsets that we had a go on at the end of last year. As such, the Athena groupset won't be compatible with the current high-end offerings. We're not sure at the moment whether future groupsets will all use the Athena standard; that's been the case with Shimano, with the new Dura Ace 9000 series Di2 now compatible with Ultegra.

Campag have thinned out the Carbon fibre on show for Athena, of course, with more of the componentry made from steel and Aluminium. The stated weight of the Athena groupset is around 2,500g, which is similar to Ultegra Di2. Campag have been busy trying to get the new groupset specced on 2013 bikes, and with some success; you'll likely see Athena EPS next year on Pinarello, Fuji and Felt bikes among others. If you fancy upgrading your current bike, you'll likely be waiting until the end of 2012 to see it on the shelves. We don't have a retail price for the groupset at present, but they should be able to tell us the RRP by the time the Eurobike show comes around. As well as Ergo shifters, there'll be TT units for your against-the-clock bike.

Like the Record and Super Record gear, Athena EPS is currently made at Campag's Vicenza facility that we had a look round when we were over there for the last EPS launch. They didn't let us in the EPS bit, though; presumably because it was full of Athena components in development and they didn't want to spoil the surprise.

There'll be more info on the groupset as soon as we have it.