We’re just back from Italy where we used Campagnolo’s brand new EPS (Electronic Power Shift) system for the first time, and we can report that it’s a silky-smooth setup with several benefits over a mechanical option. Whether you think these benefits justify the extra cash is down to you, of course.

We’ve reported on the technological background to the product already and we’ll later post video of Flavio Cracco, Campagnolo’s Electronic Control Components R&D Manager, explaining the system. Here, we’ll give you the initial ride impressions from Dave and Mat who spent several hours using EPS on the roads around Campag’s Vicenza HQ.

First, five reasons why EPS is a step forward…

You’ll probably know that Campag’s existing mechanical road shifters use a lever behind the brake lever to shift to a larger chainring or sprocket and a thumb lever on the side of the control body to manage shifts in the opposite direction. 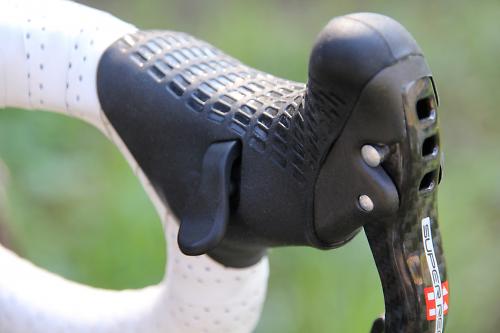 It’s the same with the new EPS controls but the thumb lever is easier to use from both the hoods and the drops. On the mechanical system, the thumb lever points out from the body of the control at right angles in order that there’s enough movement to give you the required cable pull. 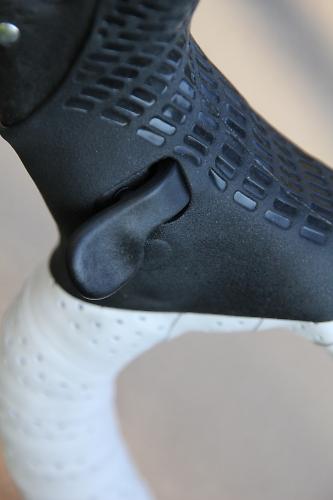 With the electronic system, cable pull isn’t a consideration. You just need to tap the thumb lever so Campag have redesigned it to sit much closer to the control body.

2 Multiple shifts are quicker than with mechanical

With Campagnolo’s mechanical systems, you can shift multiple gears across the cassette by moving the levers on the right-hand control further than you would for a single shift. Different groupsets allow you to shift different numbers of sprockets at a time, but you always have to push more than once to move across the entire cassette. With EPS, when you want to shift more than one gear you just keep your finger or thumb on the lever. You don’t need to hit it more than once, you just hold the position. Campag reckon you can shift across the entire 11-speed cassette in 1.5secs. We didn’t time it, but that sounds feasible.

Most times you change gear just one at a time, but our test ride was pretty lumpy and we used this capability on several occasions. Say you’re heading into a dip. You’re churning along downhill in a big gear, then you hit the bottom of the dip and start heading uphill. You might easily want to jump several gears. With EPS that’s still just one movement. 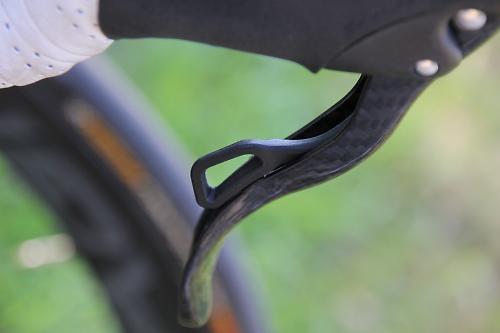 The opposite is true when you hit a steep descent. You might be using a large sprocket on the flat or a climb and then pick up speed rapidly as you start to head downhill. In this case you might want to get right down the cassette onto a small sprocket quickly. EPS will get you there super-fast with just one hand movement.

Shimano’s Di2 system doesn’t have this facility. If you want to change three gears, you have to tap the button three times. 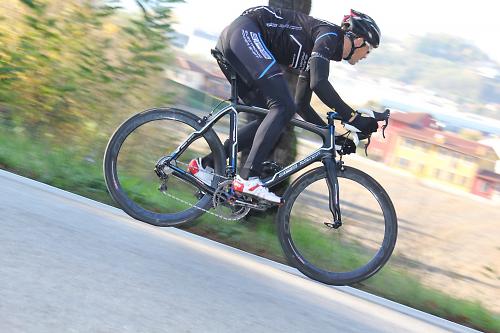 Moving the levers on a mechanical system isn’t the trickiest operation in the world, clearly, but it can be a bit of a reach if you want to shift across the entire range available to you. With EPS it’s one short movement every time. 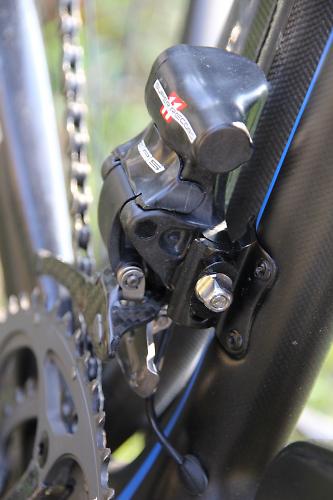 Once the EPS system is set up correctly, no matter what sprocket you are in you never need to trim the position of the front mech to prevent chain rub because it moves automatically.

When you change gear – moving across the cassette – you’ll sometimes hear a slight whirr as the front mech moves slightly to take account of this, improving efficiency and reducing wear. The front mech doesn’t need to adjust itself every time, it makes two corrections upwards and downwards depends what gear you’re in.

Shimano’s Di2 systems have similar features for the same reasons. 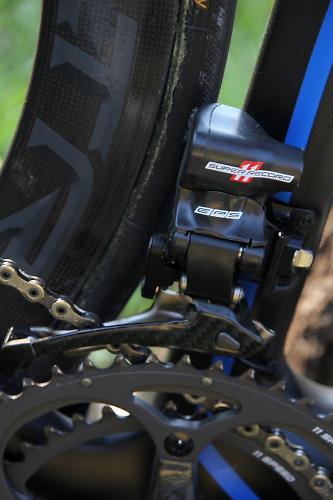 Why you can chill out

Every time we run anything on electronic shifting, someone comments with something along the lines of, “Ah, but how do I get home if the battery runs out of juice?” So rather than waiting for the question, we’ll answer it right now.

First, you don’t get a mobile phone battery in the EPS system (or in either of Shimano’s Di2 systems). In average use, Campag reckon you’ll get about 1,500-2,000km of riding per charge. In fact, the riders who’ve been using it for the past year say over 3,000km is possible. 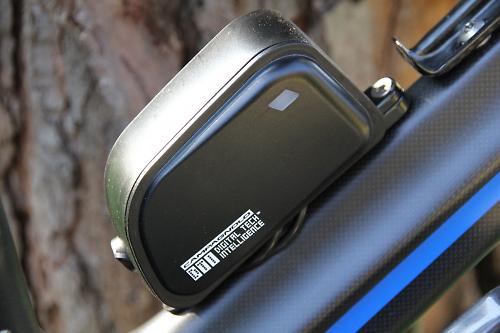 I’m guessing that if you can’t remember to recharge the system within one to three months, you’re probably going to struggle to remember where you live anyway.

You can check the remaining charge on the interface – different coloured lights tell you how much is left – and a buzzer sounds when there’s only 6% remaining. Even if you wait for the buzzer, as long as you’re within 100 miles of home you’ll still be fine.

Okay, assuming you don’t check the battery level for several weeks or months and take no notice of the alarm, EPS has a Ride Back Home function. This allows you to position the rear mech manually on the sprocket you want and ride on that. 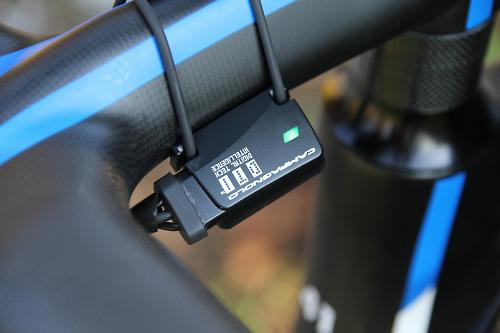 If you crash and whack the rear mech, the mechanical part of the gear can become ‘uncoupled’ from the electronic part to avoid damage. The idea is that it stops the system working temporarily so you don’t cause further damage with continued use. You can ‘recouple’ them out on the road to get the system up and running again.

Another concern we often hear is water getting in the system. Campag reckon EPS will carry on working a metre underwater for 30mins so, unless you can hold your breath for a really long time, you probably don’t need to stress.

How does EPS compare to Di2?

In use the Campagnolo system feels very different from Shimano’s Di2. Campag make great play of the work they've on the tactile side of things with their MultiDome technology. MultiDome comprises various metal layers that are designed to make the levers feel like their existing mechanical action. Why? Campag reckon their lever feel is as distinctive and important as the engine noise is to a Ducatti, so it had to be retained. 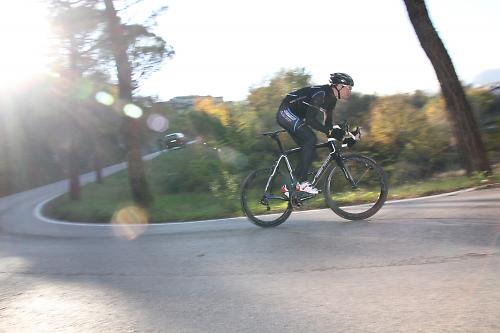 The lever placement is very different from Shimano’s too. With Shimano, both are finger-operated. With EPS the finger-lever moves you in one direction, the thumb-lever in the other direction. That’s certainly easier to remember to begin with. Getting used to the Shimano system takes a little longer.

Our Dave prefers the Campag shifting over Shimano’s and also over Campag’s mechanical design.

“I've never been the Ergo Lever's biggest fan for one main reason: the thumb lever is in the wrong place. It's too high, which means it's difficult to reach from the drops.

“The new EPS Ergopower controls have the thumb lever set much lower, and it's a massive improvement. It falls easily to hand from both hoods and drops, and that, coupled with the fact that you can pull the upshift lever away from the brake towards the bars, means that it's simple to make any gear change from either hand position. “Campag and Shimano have both aped their mechanical systems with their new electronic levers, as you might expect. The irony for me is that while I prefer Shimano's mechanical levers, Campag's lever positioning works better in an electronic setup. The nature of the shift has allowed them to reposition the thumb lever to the place where it always should have been, in my opinion.”

“The multishift capability of the EPS system makes a real difference. In terms of actual function it's the thing that most separates the Campag system from the Shimano one. It's intuitive and incredibly useful.

“Shifting down the block to a higher gear is quicker than the other way round, so it takes a bit of time to learn how much time on the button equals how many changes. It means that when you crest a climb and start on the descent you can simply dump a stack of gears in one go.

“Similarly if you get caught out at the bottom of an unexpected climb it's one press to go up the block as far as you want. It doesn't sound like it would make a lot of difference but it really does.”

How much will it cost?

That's the million dollar question; hopefully the answer isn't a million dollars. We don't have a confirmed price yet, but from talking to Campag it's clear that they're pitching the Record EPS groupset against Dura Ace Di2.

The official price of the latter currently stands at about £2,500 and you can get the full groupset online for not much more than two grand. That being the case, you can expect Record EPS to be priced at around that level. Super Record will be pricier, but the differences between the actual EPS components are pretty minimal.

The power unit and interface are the same, and the Ergo levers, save for some holes in the brake lever on the Super Record, are the same too. The two mechs get more carbon in Super Record guise but most of the difference between the two groupsets is in the non-mechanical components.

That being the case, the price difference shouldn't be dissimilar to that between the mechanical groupsets, but we reckon that Campag might squeeze that gap open a bit for EPS. Let's poke a wetted finger in the air and suggest that you'll need somewhere over £2,000 for Record and we wouldn't rule out a list price of £2,500. Super Record is going to be at least £3,000, and quite probably £3,500. So that pretty test bike - a Pinarello Dogma II with Bora Ultra wheels and a fancy-dan integrated cockpit - is probably about 10 grand's worth of kit. Ouch!