For a roadie, getting invited to Campagnolo’s HQ in Vicenza, northern Italy, is a high point. It’s like getting to visit Willy Wonka’s chocolate factory. I mean, this isn’t any old bike company… this is Campagnolo. Actual Campagnolo. And we’re here. Walking around. Eyes wide. Looking at stuff… At Campagnolo.

Allow me to get all misty eyed for a minute. The first cycling jersey I ever owned had Campagnolo writ large across the front. Raleigh Campagnolo. Red wool with a yellow band around the chest. Black, felty letters. 1984, maybe. I was 14, something like that. Got it for Christmas. I loved that jersey. I still have it in the other room. I still love it. It was too big for me to start with and was soon too small but I wear it about once a year anyway, even now.

I didn’t own any Campag kit back then or for ages afterwards, but I loved the Campagnolo name. Italian. Exotic. Heritage and prestige packed into one word. Spin forward 20-odd years... Dave and I are in Vicenza mainly to check out the new EPS electronic shifting system but when Campag’s Lerrj Piazza offered us a look around their place at the same time, well, we were in the door faster than you could say “I’ve got a golden ticket.”

And here we are. The first thing you notice is the scale of the operation. It’s large. Campagnolo employ over 700 people here. You’ve got the offices and a big factory all together on one site. Campag have got their own internal patent department tucked away in here somewhere; they’re one of only three Italian companies who have one, Lerrj tells us. 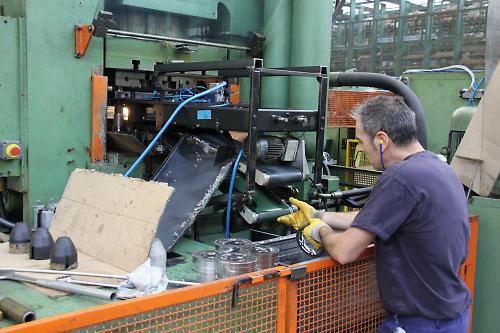 Anyone who strokes their chin knowingly and tells you that, of course, Campag make all their equipment in the Far East these days, is wrong (not that I subscribe to the notion that Europe equals good, Far East equals inferior in the first place).

Campag do own a facility in the Far East and one in Romania but the design is done here in Vicenza. Initial production is usually done here too because Campag can control it more easily on site and get everything exactly how they want it. Then, once everything is up and running and they’re happy with the product, they’ll often shift the manufacture to one of the other facilities. The machines will frequently get shipped out too so it’s just the location of the production that changes.

The Super-Record and Record EPS systems, for example, were developed here in Vicenza. We chatted with the guy who headed up the product development, Flavio Cracco, who works here on site. It’s made here too and will be for the foreseeable future. 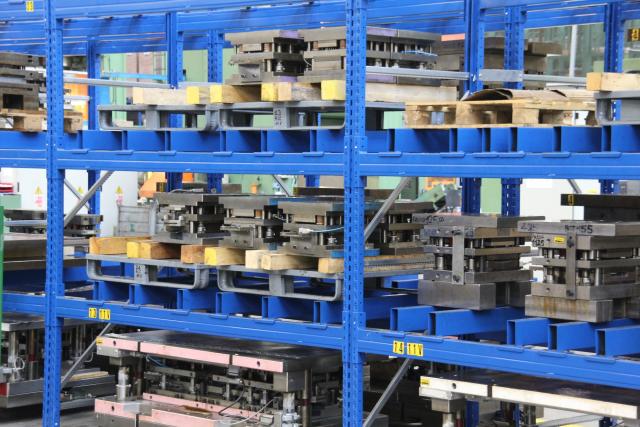 All the dies and moulds are here too, all lined up and labelled. That’s a whole lot of cycling history lined up on those shelves. Some of these machines are huge. They’re monsters. Twenty feet tall, maybe. We stand by one that’s making chainrings, pressing them out of sheets of metal. That’s a whole lot of pressure going on in there. And out they pop one at a time, each of them getting a quick inspection before it moves on to the next step of the process while unused metal gets spat out the other side. There are cranks being born, mechs, brake callipers, bottom brackets… You name it, if it’s part of a groupset, it’s being created here, every bit of it eventually destined to make a difference to a cyclist’s life somewhere in the world. It takes a minute to work out what some of the half-formed stuff is. There are CNC machines with swarf landing in bins and the whole place smells like the metalwork classroom at school (big shout out to Mr Sanquest. Actually, I’d better shout loud; he was knocking on back in the eighties). 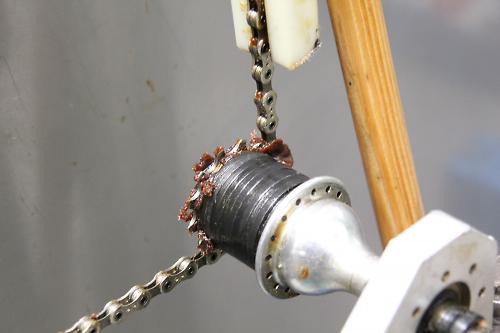 I’ve never thought about how chains are made before. It has never crossed my mind but, obviously, there has to be a machine somewhere knocking pins into every link, and here it is doing a precise job at an incredible speed, yard after yard of finished chain streaming out. That's a Campag hub that they're using as a roller in the production, by the way. 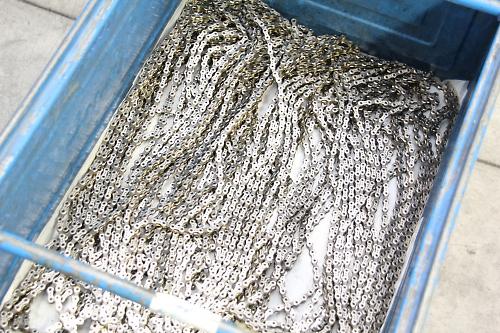 Anyway, I’ve found myself talking about the production of bicycle chains so I’d better stop myself right now and move on… There’s a room where the chainrings come in on a track in the sky – they call it the rollercoaster – and they’re loaded onto a rack for dipping in a series of chemicals to provide the protective finish. 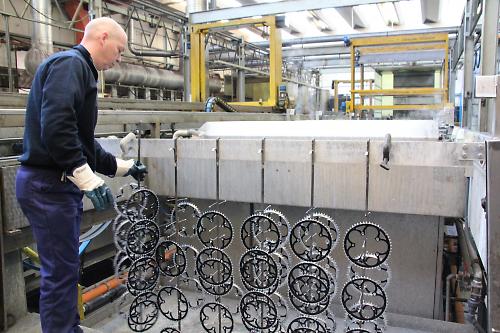 One thing that’s very noticeable is that, alongside all the mechanization, people are very much involved at every stage of the process. Everything is given a once-over before moving on to the next stage and there’s loads of quality control. Campag know they’re never going to beat other brands on price – that’s not what they’re about.

No, Campagnolo are more concerned with quality; their goal is to make products that perform well and that are going to last. They want to make products with parts that can be replaced if they wear out or get broken, not ones that need to be ditched at the first sign of trouble.

“Every time a product doesn’t work as we expect, it’s a physical pain for the company,” says Lerrj. It sounds like marketing spiel but maybe it’s true.