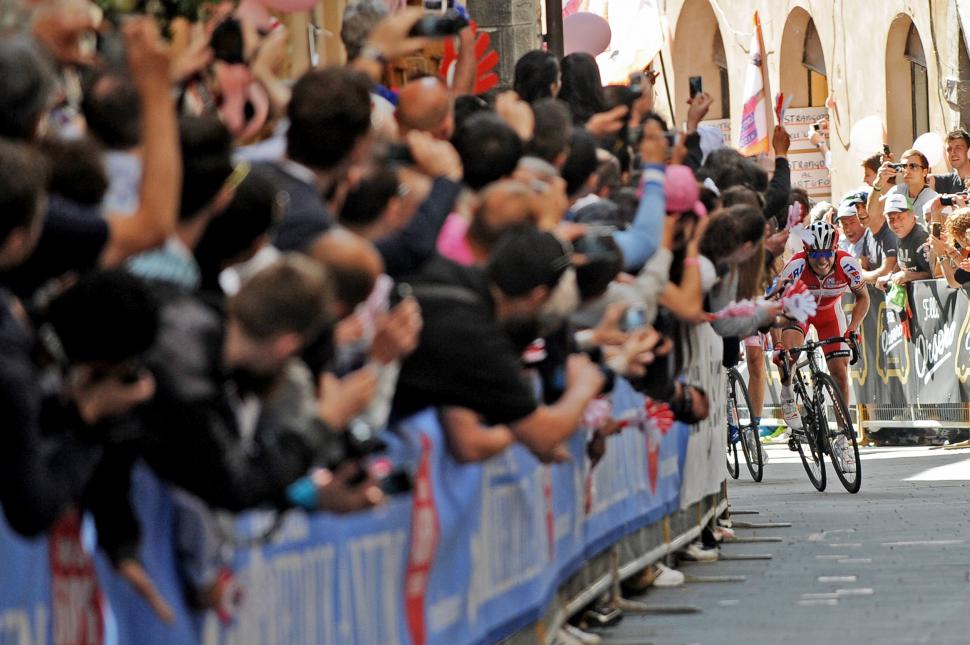 NetApp's Huzarski second with Visconti of Movistar third as Hesjedal sees race lead slip away on tough finish...
by Simon_MacMichael

Jouaquin Rodriguez of Katusha is the new leader of the Giro d'Italia after prevailing on a very tough final climb in Assisi to take victory from Bartosz Huzarski of NetApp and Giovanni Visconti of Movistar. This morning's race leader, Ryder Hesjedal of Garmin-Barracuda, was in the group contesting the finale, crossing the line several seconds after Rodriguez, but the 20 bonus seconds the Spaniard gains for his victory is enough to put him into the maglia rosa.

The Spaniard, nicknamed ‘Purito’ after mimicking smoking a cigar on a training climb as a young pro to show his team mates how easy he was finding it, was the favourite to win today’s stage, having demonstrated his form on this type of explosive finish when winning the  Fleche Wallonne last month. 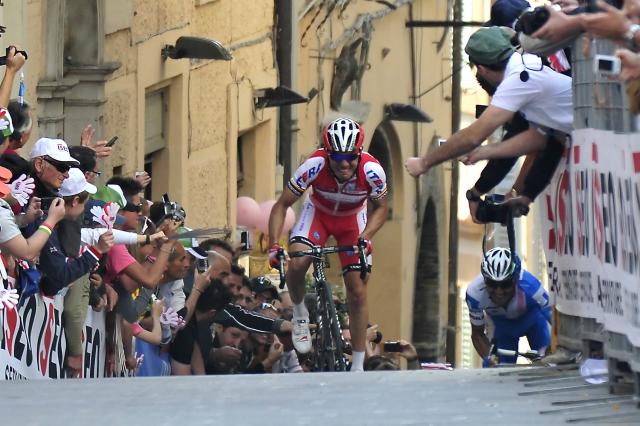 On his 33rd birthday on Saturday, Rodriguez had to be content with fourth place as Paolo Tiralongo of Astana took the stage win from Michele Scarponi, but he gave himself a late present today, timing his attack to perfection on a sharp ascent through the narrow streets of Assisi, reminiscent of the finale of the Strade Bianche in Siena. As the roads narrowed in the final five kilometres of today’s stage with the peloton heading towards the Umbrian hilltop town and birthplace of St Francis – the finish was in the shadow of the basilica that bears his name – Liquigas Cannondale were prominent at the front, riders strung out way back along the road behind them.

On the first of the two short but tough climbs heading towards the line, the main overall contenders were swarming all over the front of the race, maglia rosa Hesjedal, by now isolated from his Garmin Barracuda team mates, trying desperately to keep tabs on Rodriguez, who was lying just nine seconds behind him in the general classification. Tom Slagter of Rabobank tried to get away on that penultimate climb, but it was Team Sky’s Rigoberto Uran and AG2R’s John Gadret who led the race down to the foot of the last short but sharp ascent.

Hitting that last climb, Katusha’s Daniel Moreno moved to the front, working for his team leader, and although other riders including Tiralongo and in particular Slagter chanced their arm, it was Rodriguez who burst to the front in the final part of the ascent, Huzarski trying to go with him but having to be content with second place – although that will no doubt be cause for celebration for his NetApp team, awarded a wild card entry to the race. Within 10 kilometres of the start of the stage on the Tyrrhenian coast, five riders got away from the peloton, including Martijn Keiser of Vacansoleil-DCM, who had slipped into yesterday’s break, and Euskaltel’s Miguel Minguez, involved in a break on Sunday. Joining them were Francesco Failli of Farnese Vini, NetApp’s Matthias Brandle, and Guillaume Bonnafond of AG2R. With 30 kilometres left, Brandle and Kaizer were dropped by their fellow escapees, the peloton just half a minute behind, but the pair were then joined by Rabobank’s Stef Clement who had attacked from the bunch and bridged across.

The Dutchman's fresh legs helped them reach back to the three in front with 25km left to ride, the group of six now a minute ahead of the peloton. It would be a brief swansong for the breakaway riders, however, as they were unceremoniously swept up with around 8 kilometres to go. My other tractor's a Lamborghini... (Daniele Badolato - LaPresse - RCS Sport)

Before that, with the five original members of break still together as they passed the intermediate sprint at the exact halfway point of today’s 186km stage from Civitavecchia, Kaizer took maximum points as he had done yesterday.

That meant there was only one point on offer for the peloton, a little over four minutes back at that stage, and world champion Mark Cavendish, who had closed the gap over points classification leader Matt Goss of Orica-GreenEdge yesterday by crossing the line fourth in the intermediate sprint, led the main group across unopposed. While any hopes the Team Sky rider had of getting into the red jersey yesterday were scuppered by his being brought down in yesterday’s crash at the end of the stage, which also involved Goss, there’s a good chance he can do so tomorrow, with Stage 11 predicted to end in a sprint.

That finish, in Montecatini, will be on roads familiar to Cavendish – it’s just a few kilometres form his Italian base in Quarrata, and on roads that team mates Geraint Thomas, Peter Kennaugh and Ian Stannard also know well from their time at the British Cycling Olympic Academy there.
The rider who accepted responsibility for causing that crash on a hairpin bend 300 metres from the finish in Frosinone yesterday, former Italian champion Pippo Pozzato of Farnese Vini, did not start today after an x-ray revealed that he had fractured his wrist in the incident, although he seemed in good spirits as he gave interviews at the start.