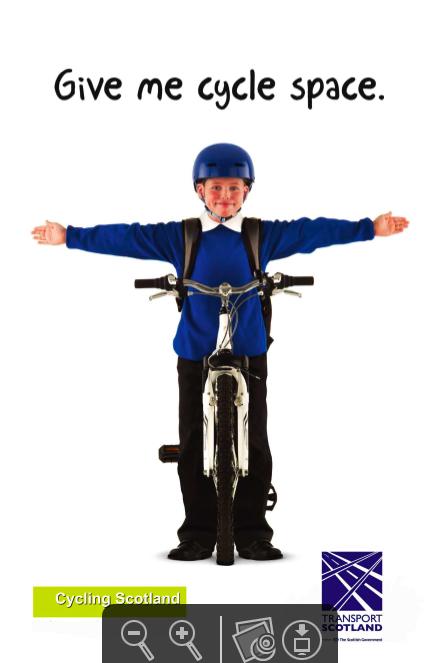 Advert coincides with launch of campaign to get more of country's kids cycling to school this summer...
by Simon_MacMichael

With summer approaching – accompanied, hopefully, by better weather than we've experienced of late – Cycling Scotland is once again urging the country’s drivers to give schoolchildren space and time to allow them to ride safely to school, and this year has produced a TV advert as part of its campaign.

The appeal coincides with an initiative to get more children riding to school, with the Riderz stunt team visiting educational establishments across the country to encourage kids to take to two wheels for their journey, to build on existing growth which Cycling Scotland says had been fuelled by the exploits of Olympic champion Sir Chris Hoy, round the world cyclist Mark Beaumont and street trials ace Danny MacAskill

In line with that, Cycling Scotland has launched a Cycle to School campaign in seven areas throughout the country aimed at Cycle Friendly Zones aroud schools, with motorists asked to give children as much space as possible.

The campaign, which lasts six weeks, and covers Orkney, Moray, Edinburgh, Glasgow, North Lanarkshire, East Dunbartonshire and East Renfrewshire, includes outdoor and local radio advertising, leaflets being provided to parents, and the TV spot which made its debut last night.

Ian Aitken, chief executive of Cycling Scotland, commented: “Cycling is one of the best forms of exercise.

“With an estimated 50% of school children getting less than their recommened activity levels a day, cycling to school is an ideal way of reducing this figure and increasing children’s exercise routine.

“Getting children out in the fresh air also means they will arrive at school more alert and eager to learn.

“Research shows that children want to cycle to school so we hope by making sure drivers look out for them, more children in Scotland will get on their bikes and cycle to school.”