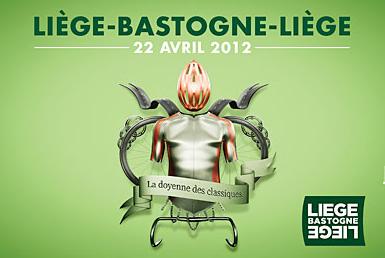 Liege-Bastogne-Liege: Maxim Iglinsky makes it two out of three for Astana in the Ardennes

Maxim Iglinsky has followed up Astana team mate Enrico Gasparotto's victory in last week's Amstel Gold Race by today winning the Liege-Bastogne-Liege, the third and final race of Ardennes Week. The Kazakh rider, who celebrated his 31st birthday last week, caught lone escapee Vincenzo Nibali of Liquigas Cannondale just before the flamme rouge, and beat him by 20 seconds. Gasparotto himself won the sprint for third place from a small group including Garmin-Barracuda's Dan Martin and Europcar's Thomas Voeckler.

In 2010, Iglinsky won the Strade Bianche as well as securing top ten placings in Milan-San Remo, Gent Wevelgem and the Tour of Flanders. Second to RadioShack-Nissan’s Fabian Cancellara in this season’s Strade Bianche, his victory today underlines his status as one of the stronger yet less heralded riders when it comes to the Classics.

Nibali, third in the year’s opening Monument, Milan-San Remo, had been found wanting in the sprint there against the two riders with whom he had attacked on the Poggio there, Cancellara and eventual winner, GreenEdge’s Simon Gerrans.

From the moment the Sicilian attacked today 20 kilometres from the finish on the Côte de La Roche aux Faucons, the penultimate climb of the 257.5km race, it was clear that his tactic was to use his descending and cornering skills to stretch out as much as an advantage as possible over what was now a select group chasing him.

That group contained some big names, including Euskaltel-Euskadi’s Samuel Sanchez and local hero and defending champion Philippe Gilbert of BMC Racing, who in this race 12 months ago had become only the second man to win all three Ardennes Classics in the same season.

Entering the final ten kilometres, Iglinsky and Katusha’s Joaquin Rodriguez, winner of Fleche Wallonne during the week, led the chase and with the group behind them looking disorganised, they appeared to be the only threat to the 2010 Vuelta winner as he sought to seal his first big Classics win.

As Nibali headed into the final two kilometres, his advantage was tumbling rapidly as Iglinsky, by now on his own, closed in on him and, with the flamme rouge in sight, passed the Italian who had no strength left to try and get on the Kazakh’s wheel, although he did hold on for second place.

First raced in 1892, Liege-Bastogne-Liege is the oldest of all the Classics, although it was not raced between 1895 and 1907, not in 1910, which together with suspension of racing during both World Wars, means that three of the other four Monuments lead it in terms of editions.

Today’s 98th running of the race took place amid intermittent rain, with three riders, Dario Cataldo of Omega Pharma-Quick Step, Argos-Shimano’s Simon Geschke and Kevin Ista of Accent Jobs getting away from the peloton with almost 40km route already covered.

That trio would subsequently be joined by another three riders, Reinier Honig of Lanbouwkrediet, Gregory Habeaux of Accent Jobs, and Team Type 1’s Alessandro Bazzana, and working together the six would establish a lead of more than 12 minutes.

That advantage had been halved by the time the race reached its halfway point and by the time the race approached the Cote de la Redoute, around 40 kilometres out, just Cataldo and Bazzana remained a minute ahead of the main group, and had been joined by riders including Europcar’a Pierre Rolland and Vasil Kiryienka of Movistar, who had bridged across.

The latter’s team leader, Alejandro Valverde, who admitted that he had suffered from flu in the run-up to Ardennes Week, had seen his hopes dashed on the Redoute when he suffered a mechanical problem on the steepest part of the climb.

None of Cataldo, Rolland or Kiryienka was able to respond to Nibali’s burst of acceleration on the Côte de La Roche aux Faucons, although his bid for glory thwarted thanks to Iglinsky’s response.