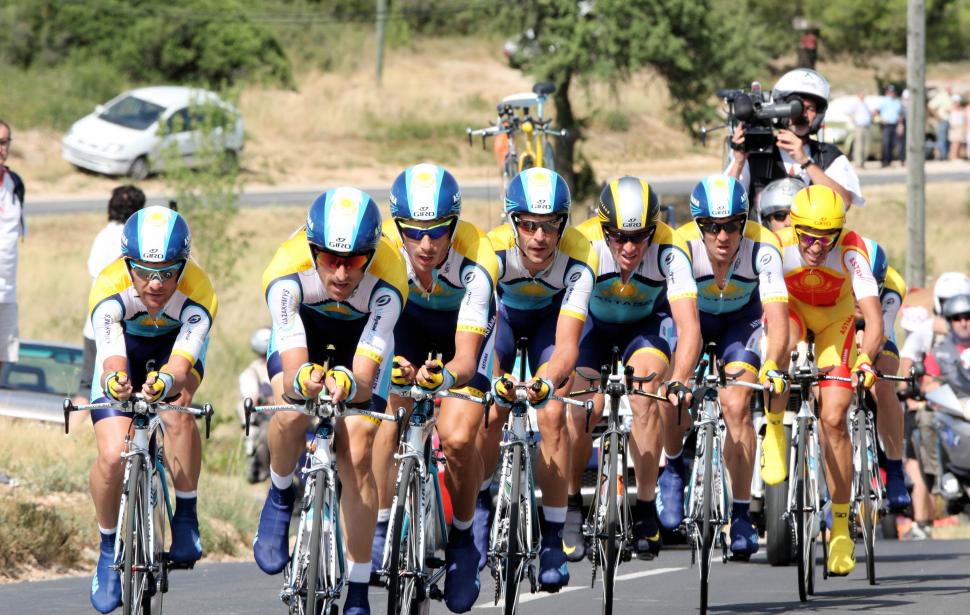 Armstrong shares the same time as the Swiss...
by dave atkinson

Astana pulled out all the stops on a difficult TTT course around Montpellier to almost put Armstrong in the yellow jersey: in the end Cancellara maintains the narrowest of leads over the Texan with the two sharing the same time out on the road. It's Astana who confirm themselves as the strongest team in the Tour, however, with five riders in the top ten and four in the top five

There was plenty of moaning from the pros about the course, which was very technical for a team time trial, consisiting primarily of winding D roads for the first 25km which gave way to slightly wider and flatter sections later on. It was certainly a course that tested the bike handling skills of the riders, with Mechov among the casualties of a sharp left-hander near the start which also claimed the considerable scalp of Bernard Hinault on a pre-competition charity ride. There was plenty of other narrow sections to catch out the unwary; at one point a tight bend accounted for four of the Bbox Bouyges Telecom team.

Most of the teams found it hard to keep in formation, with many sections of the course barely wide enough to allow the train to overtake the rider peeling off the front. Hayden Roulston, of the Cervelo Test Team, said: "It was very hard, very difficult throughout the entire course. It was very tough. We saw that there were some crashes from some of the other teams and decided to be a little more cautious in the first turns and roundabouts. In the crosswinds, we went single-file, that was the best way to ride it."

Rabobank were the big losers early on, their time of 48:50 only good enough for 11th place. Sastre's Cervelo Test Team had an average day, coming over the line in 8th with a time of 48:07. As Astana rolled off the ramp, the last team to start, it was Katusha making the running having finished the 39km course in 47:52, with Caisse D'Epargne and Cervelo Test Team making up the virtual podium. Liquigas were the next to hit the front, posting a time 25 seconds quicker than Katusha.

At that point Garmin Slipstream were fastest on the road, despite having burned off four of their team within the first 10km, and even though the four faster riders (Millar, Wiggins, Zabriskie and Vade Velde) were having to carry Ryder Hesyedal they went through the third checkpoint 31 seconds up on Liquigas. Saxobank were a quarter of a minute down on the Italians, with Cancellara doing the majority of the work and the rest of the team hanging on - it almost seemed like he'd be better off on his own.

With four teams (Garmin Slipstream, Saxo Bank, Columbia HTC and Astana) remaining on the course it was all to play for. Astana went through the second checkpoint 23 seconds ahead of Garmin Slipstream, just as the US team crossed the line in 46:47 to take first place by 40 seconds with three teams left. With Tony Martin and Columbia HTC well down on the pace of the leaders it was a straight race between Cancellara and Armstrong for yellow: a swing of 40 seconds to the Kazakh team would be enough. The big Swiss powered his team home in a time of 47:09; further up the course Astana's remaining seven riders looked hungry as they moved onto the faster final stages of the course. At the third intermediate checkpoint Astana had done enough: they led Saxo Bank by 41 seconds, enough to place the Maillot Jaune on the shoulders of Armstrong out on the road. Columbia HTC came in fifth with a time of 47:28, leaving just Astana who ran out clear winners in the end with a superb time of 46:29, 17 seconds ahead of Garmin Slipstream but 40 seconds ahead of Saxo Bank, exactly the gap between Cancelllara and Armstrong. Had Armstrong won it?

Confusion reigned for a few minutes while everyone worked out exactly what the situation was at the top of the General Classifiaction, with the result going to a countback to the fractions of a second dividing the two in the prologue. In the end Cancellara was confirmed as having retained the yellow jersey by just 0.22 seconds: the two share the same time on the road.