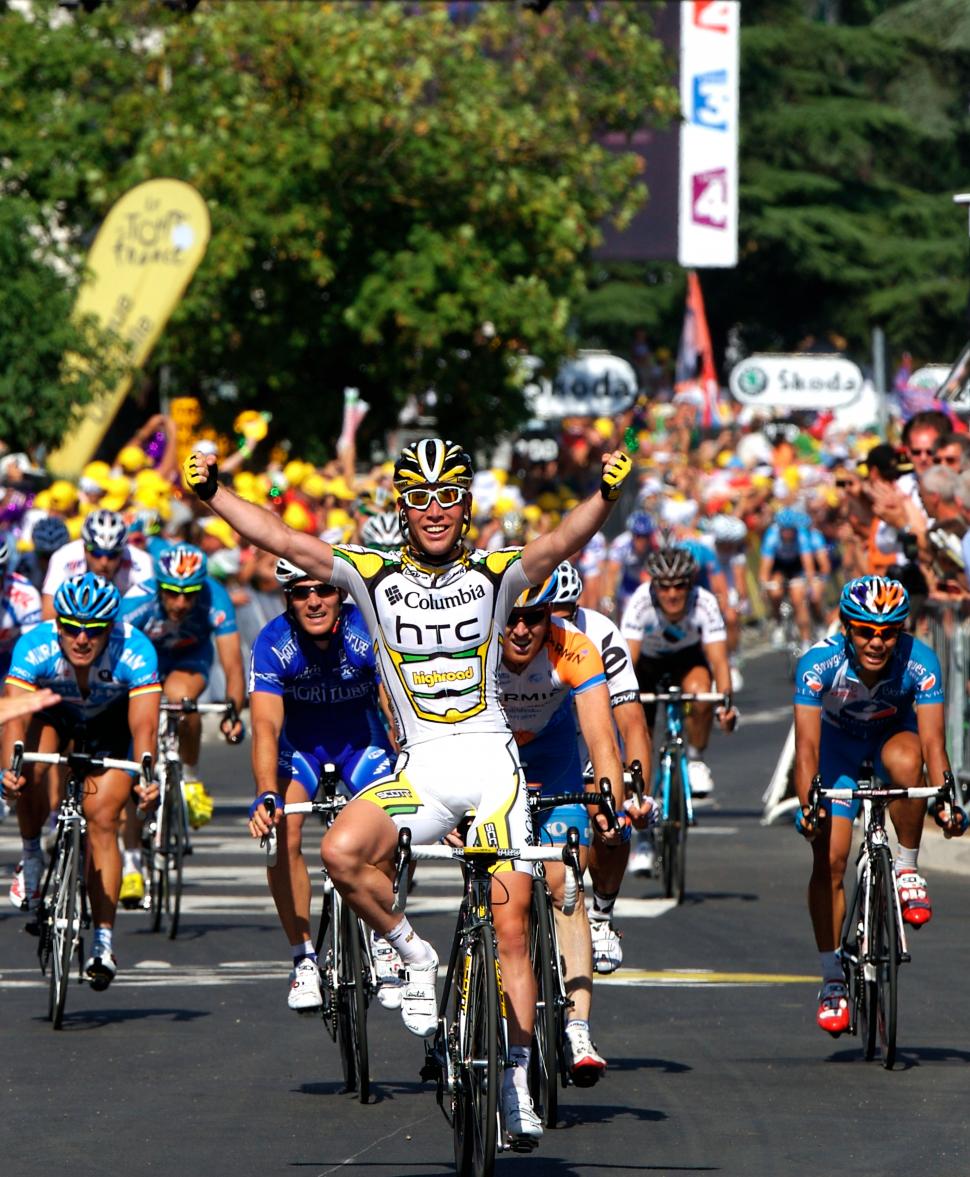 Mark Cavendish enjoyed the perfect leadout to win stage 2 of the Tour de France and take his Tour stage win tally to five. Garmin's Tyler Farrar held on for second and Romain Feillu was third.

Fabian Cancellara remains in yellow after today's stage with Alberto Contador in 2nd and Britain's Bradley Wiggins 3rd. Contador and his Astana team mates all finished safely in the pack.

Cavendish saved himself yesterday rolling home in 177th place in the time trial - that proved to be an excellent strategy for today's 187km effort from Monaco - Brignoles the closing stages of which were ridden at a ferocious pace as teams fought to get their sprint trains to the front, despite some forceful efforts by Milram in particular, Columbia HTC's control of the business end of the peloton was never in doubt. It was they along with Cervelo who wound up the pace to catch the early four man break with 10km to go. The break comprising Frenchmen Cyril Dessel (AG2R) and Stephane Auge (Cofidis), Dutchman Stef Clement (Rabobank) and Finn Jussi Veikkanen (FdJ) had been away since the 25th kilometre.

As the peloton was about to make the catch Katusha's Russian time trial specialist Mikhail Ignatiev made a lone bid for glory, but on such a fast, straight run in it was always going to be the longest of shots and he was duly swept up by the peloton, with Columbia at the front.

After yesterday's stage Cavendish was making noises along the lines of today's stage might not be best suited to him, as the day wore on and Columbia upped the pace this revealed to be a pretty thinly disguised bluff. Cavendish has said that he values Tour stage wins even above winning the green jersey so it was unlikely that any stage set up for a sprint finish this year would fail to arouse his interest.

And that's how it proved today with Columbia serving notice of the speed of their sprinting train as they simply out-powered their rivals, with Mark Renshaw, Michael Rogers and George Hincapie in particular doing sterling work to put the Manx missile on target for the win. So powerful was the leadout that Cavendish was already well clear of his rivals when Renshaw peeled off and Tyler Farrar was effectively sprinting for second place as Cavendish rode away from him.

A crash on a fast, tricky bend just before the finish did not affect Cavendish but it probably did have an effect on the minor placings as many riders were forced to take avoiding action (including running off the course) amongst the Tom Boonen.

If Cavendish needed any more motivation to go for the win today his old friend Wiggins provided it – after yesterday's stage he was was the leader in the green jersey competition, apparently his Garmin team mate David Millar thought it would be a good idea to take a picture of Bradley in his green jersey and send it to Cavendish.

Speaking after the stage Cavendish said: "Today we meant business and I'm happy to finish with a win".

Tomorrow's stage takes the race on 196.5Km jaunt from Marseille to La Grande-Motte on another day that looks set up for the sprinters - don't bet against Cavendish "meaning business" again then too as he closes on Barry Hoban's total of eight Tour stage wins by a British rider.