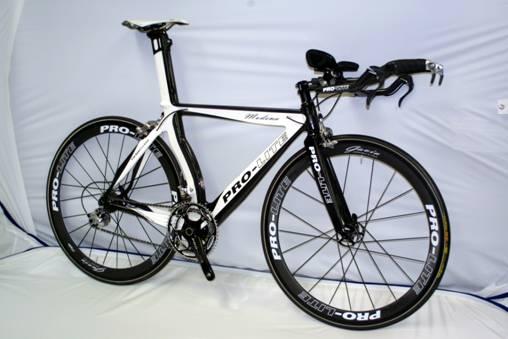 Pro-Lite are one of those brands you might not have heard of, but whose bikes and gear merit a closer look. They aren't one of the names you'll see in the usual round of bike mag reviews. They'd certainly slipped under our radar until a poster (who may, or may not have been their marketing guy) gave them a plug on our forum. Either way, a poke around their website revealed an interesting range of bikes with Italian sounding names (the company are in fact a outfit based in Taiwan, founded and run by a Briton, Steve Fenton) and a vast range of wheels and components. At that point the light went on “Oh, yeah – that Pro-Lite”. They've just launched their 2009 range, and we hope to get their Galileo road bike in for test. In the meantime you can also see the bikes at the Cycle Show this week at London's Earl's Court. Here's what they've got… Galileo Full Carbon from £1695. 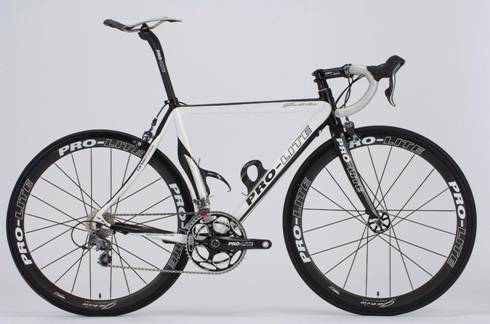 Pro-Lite's top end road bike boasts a full carbon construction using lugs and shaped tubes to achieve a ride that is both stiff where it needs to be and comfortable where it counts. Pro-Lite also place a great emphasis on aero optimising their tubes and frame alignment and durability, it goes without saying that they also aim to make it all as light as possible. The frames are also designed to give consistent ride characteristics ride across the size range. For those really interested in the gritty detail, they go into theirdesign and construction methods in some depth on their site – it's worth a read. Claimed weight for the 54cm large frame is 1300g – so not super-light, but no lard bucket either. Sizes range from 50 – 58cm and it's available as a full bike with either Shimano or Campagnolo groupsets, there are also, aluminium or carbon wheel options. Modena from £2000 New for 2009, the Modena is Pro-Lite's top of the range time trial or triathlon bike. A full carbon monocoque with Pro-Lite Carbon Bladed forks, this bike was extensively tested and refined in the wind tunnel. That rear wheel cutout on the seat post is very similar to that of the Cervelo P3 and P4, in fact there's a definite P3esque look to the Modena – there are worse things for a time trial bike to look like, and as we keep saying – because the laws of aerodynamics are immutable they should all look the same anyway. That said, in the pictures at least, the rear wheel clearance doesn't look as close as on either of the Canadian bikes, instead there is a more generous gap – similar to that on the new Look 986, which Look claim is actually more aerodynamically effective than frames with closer wheel tolerances. Actually, Pro-Lite do adhere to the closer is better philosophy it's just that this bike is pre-production prototype. Rear wheel clearance on production models will be 4mm. As you would expect on a top-end time trial bike all the cables are internally routed. Complete bikes come equipped with Pro-Lite's one piece carbon aero bars (with internal cable routing) Shimano or Campagnolo groupset and the choice of either a time trial (90mm carbon deep section front wheel and a rear disc), or triathlon wheelset (with a choice of wither 50mm or 90mm deep section wheels). There are two sizes available: small 51cm; and large 55cm. Prices start at £2000. 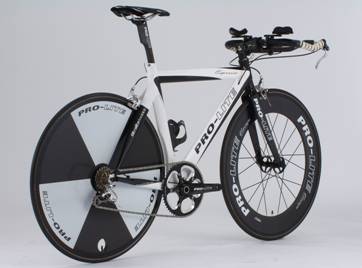 The Piemonte 'cross bike is also worth a look, made from 7046 Aluminium (Pro-Lite reckon they are the only bike company in the world working in this material which is their answer to Scandium, and is claimed to be 16% stronger and 12 % lighter than 7005 aluminium). More interesting still is their claim to have designed the profiles of the chainstays in such a way that they shed mud more easily than conventional 'cross bike stays and that it is also less likely to stick in the first place. Trentino track bike from £999

If you like your bikes simple yet sophisticated the Trentino track bike might be the one for you. Mind you, this is pretty much a pure track machine – can't help thinking it might do pretty well as an ultimate pimped street bike, bit like the Pearson Cartouche. The Trentino is aluminium with stainless steel dropouts and prices start from £999, and given that it's a track bike they probably finish around there too. Pro-Lite will be debuting a fixed street bike, in gloss black at the Cycle Show, expected retail price is likely to be around £799 – no word how close a resemblance the frame bears to the Trentino though. We'll just have to pitch along to Earls Court to find out. If you are doing the same you'll fine Pro-Lite on stand C21. This year's Cycle Show runs from the from the 10th -12th of October at Earls court in London. We will be there too on stand D13a, so come and say hello. road.cc users who book in advance at www.cycleshow.co.uk/STM (entering the code “STM” , so they know we sent you*) will get a fiver off the walk up on the day price (which is £14) giving you extra cash to spend in the retail zone. *To book by phone call 0844 848 0122