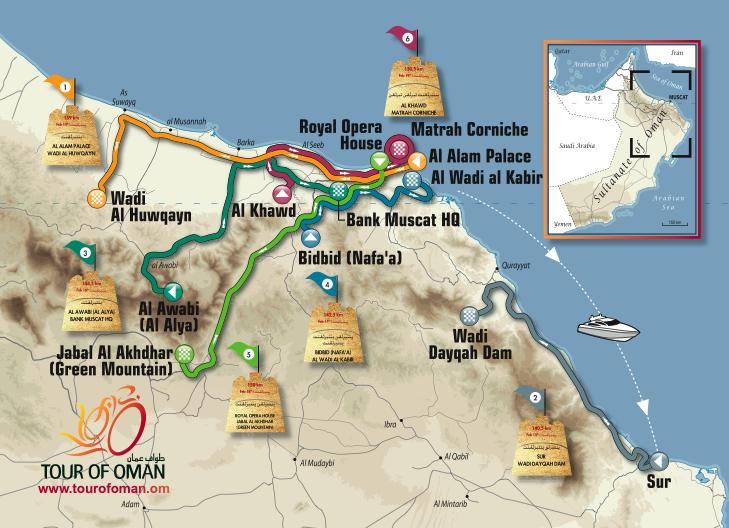 André Greipel of Lotto-Belisol remains in the lead of the Tour of Oman after winning a thrilling stage Stage 4 , which saw a series of attacks on a tough closing circuit, the German prevailing over his closest rival in the overall stadings, Peter Sagan of Liquigas Cannondale. Tony Gallopin of RadioShack-Nissan finished third.

Today's 142.5km stage from Bidbid (Nafa'a) to Al Wadi Al Kabir featured three laps of a bumpy closing circuit featuring climbs that while not as taxing as those encountered earlier on the stage took a cumulative toll on the legs of many sprinters, but evidently not those of Greipel, who is on fire with just a month to go until Milan-San Remo, one of his big targets for the year.

Early on in the stage following a nervous start that saw several riders crash in the opening kilometres on a hot and windy day, two riders, Stijn Vandenbergh of Omega Pharma-Quick Step and Klaas Lodewijck of BMC Racing, managed to get away and at one point had a lead of nearly eight minutes.

Lodewijck was brought back on the penultimate lap, but Vandenbergh went again and managed to rebuild an advantage of nearly a minute until he too was slowly reeled in and caught on the final circuit, with attack and counter-attack animated by the likes of another Omega Pharma-Quick Step rider, Sylvain Chavenal, plus Sagan, the young Slovak aiming to get into the leader's jersey.

Somehow, however, Greipel managed to rejoin the fray to pick up yet another win in what is turnning out to be a stunning start to the 2012 season for the German sprinter.

Mark Cavendish had promised close friend and team mae Bernie Eisel, celebrating his 31st birthday, that he would try to hang on for as long as possible and managed to get back on after being dropped before that tough last lap finallt saw him distanced.