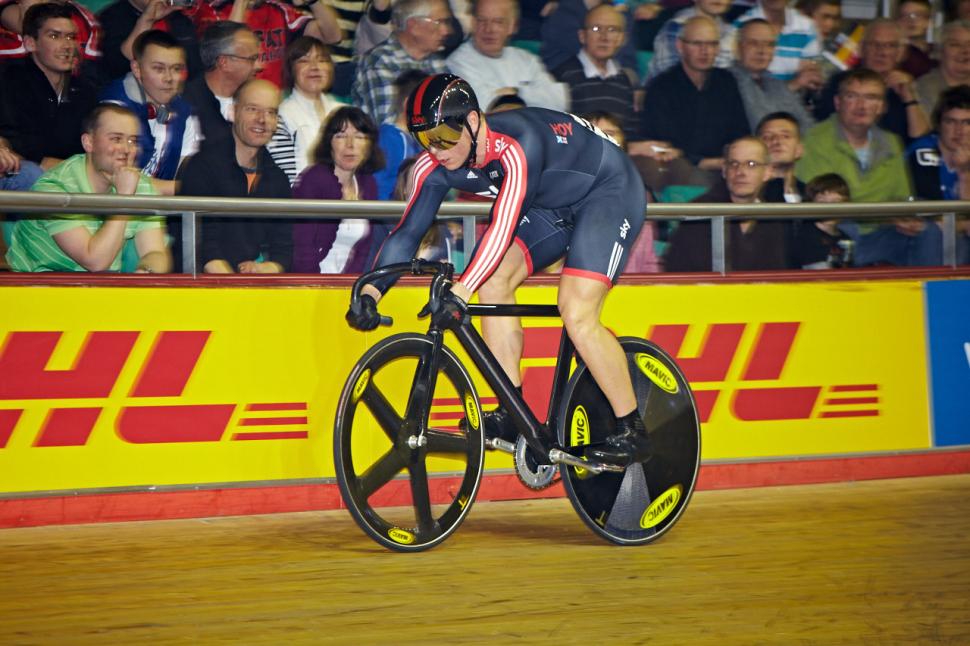 Scot wins keirin and helps beat French in team sprint, but Kenny gets better of him in individual sprint
by Simon_MacMichael

Sir Chris Hoy, who in August will defend the three Olympic titles that he won at Beijing in 2008, experienced a mixed start to his year at the Manchester Velodrome yesterday evening, winning the keirin and, as part of a strong Team Sky line-up, the team sprint, but getting beaten by Jason Kenny in the semi-final of the individual sprint, an event the 23-year-old from Bolton went on to win.

Hoy had posted the fastest qualifying time in the morning session with a time of 10.099, but fellow Team Sky rider Kenny proved too strong in the semi-final.

Kenny, recently awarded the 2011 world championship in this event after France’s Grégory Baugé was stripped of the title as a result of irregularities relating to out-of-competition drugs testing, went on to beat another of his Team Sky colleagues, Matt Crampton, in the final.

Hoy was back, however, to win the keirin, and in the final event of the evening teamed up with Kenny and Crampton to comfortably beat the French trio of Michaël d’Almeida, Mickaël Bourgain and Quentin Lafargue, despite a technical problem almost derailing Team Sky’s chances.

“It was a good night,” reflected Hoy afterwards. “I was disappointed with my sprint, it’s an area I’m trying to make less and less errors.

“To win the Keirin was great,” he continued.

“In the team sprint we had a bit of an issue, Matt’s saddle rail broke on turn three and he went off the track but came back on; for a minute I thought he was going to crash in front of me.

“I almost bailed completely and went up the track, but in the end I didn’t realise how far the French were down.

“We’re far from worried about the team sprint, all you can do is train the best you can; train hard, train smart, and that’s what we’re doing. We’re putting in some pretty horrendous training sessions at the moment.”

Hoy added: “It’s been a good day and it’s a stepping stone towards the World Cup in London,” which also counts as the Olympic test event.

“I want to win whether it’s the Revolution or the Olympics,” he concluded.

Despite the efforts of Hoy and his fellow Team Sky riders, it was the Maxgear Racing team that emerged as champions of the ninth Revolution series which they finished on 685 points, with Team Sky second on 654 and Howies third on 636.

The runner-up in that race, Michael Mørkøv, riding for Howies, went on to win the Scratch Race, beating Maxgear’s Simon Yates into second place – although he himself would win the Derny Scratch Race.

Meanwhile, Team UK Youth’s pairing of Claudio Imhof and Mark Christian emerged victorious in the 1km Madison Time Trial, which they won in a time of 59.036.

Emily Kay of Cunga Bikes and Jake Ragen of Maxgear Racing continued their dominance of the girls’ and boys’ DHL Future Stars competition, consolidating their positions at the top of the respective end-of-season standings.

Full results of yesterday’s Revolution finale can be found here, while an hour-long highlights programme will be shown tomorrow evening on ITV4 at 7pm.