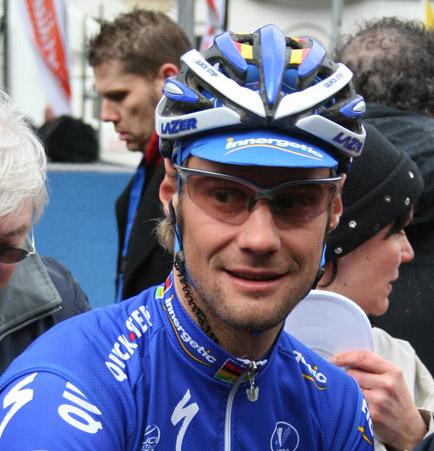 But UCI says there's no case to answer over failed test...
by Tony Farrelly

Lance Armstrong may be going to France this July, but Tom Boonen isn't. For the second year in a row Tour de France organisers the Amaury Sport Organisation (ASO0 have told Boonen that he will not be welcome at their race and again the Belgian sprinter's problems with cocaine are the reason.

Last year, Boonen was 'dis-invited' by ASO after a drugs test revealed his cocaine use, ASO felt that his presence would be incompatible with the image of the Tour de France.

"Following Tom Boonen's recent test, after a first test in 2008, the Tour de France, after meeting Quick Step team representatives, can only state that the image and behavior of Tom Boonen do not match the Tour de France's image or the one that should be promoted by such an exceptional champion," ASO said in a statement.

This time the door has been left slightly ajar for the Belgian, ASO says that he can appeal its decision to the French Olympic Committee. Boonen may chose to follow this route or he and his team may opt to test ASO's resolve in the courts. Last year Boonen and his team took his exclusion on the chin this year that looks less likely. Prior to yesterday's announcement Quick Step boss, Patrick Lefevre was threatening legal action and to sue for compensation should his star rider be excluded.

Ironically last year's Tour exclusion worked to his favour when he faced charges relating to cocaine use and possession earlier this year – a Belgian court ruling that exclusion from the Tour was punishment enough.

A remorseful Boonen had already promised to clean up his act, but in April just after winning Paris Roubaix for the third time, he failed another test for cocaine conducted by the Belgian authorities following a search of his house for as yet unspecified drugs.

As a result Boonen was temporarily suspended by his Quick Step team, but has recently started racing again in preparation for the Tour.

It was a mixed day for Boonen the Tour ban was bad news, but some good news preceded it when cycle sport's world governing body, the UCI, said that it would not be taking any action against him as a result of the failed test: "The UCI Management Committee has decided not to institute disciplinary proceedings against Mr. Tom Boonen for having allegedly taken cocaine out of competition, after the Belgian rider supplied a number of elements in his defense," said the UCI statement. What these might be is unclear, but given the nature of the drug involved it is unlikely to be that he didn't inhale.

While the Tour ban may be more than an inconvenience to Boonen he has greater problems to face with regard to both his drug taking and to the Belgian authorities interest in it. Jail time is an option for cocaine use in Belgium and the courts there are unlikely to be so lenient again should he end up in front of a judge, even if he is a superstar.