Trek tonight released pictures of the team bikes that the Schleck brothers, Fabian Cancellara and chums will be riding this season in their new Radioshack Nissan Trek team. Oh yeah, and they unveiled their new team lineup too, but you can read about that in the separate story. We'll turn this into a proper Bikes of the World Tour item just as soon as we read the tech spec, but for the moment the matchsticks holding my eyelids open are about to snap so let's just enjoy these pictures of some really cool bikes.

What I can tell you for now (and you can probably spot for yourselves) is that the black/red/blue colour scheme designed by Trek's in-house design studio combines the marquee colours of the two teams: Radioshack, and Leopard Trek that merged to form Radioshack Nissan Trek. The other big news is that bikes in the new team colours are available as of now from your local Trek Project One dealer on all 6 Series Madones and 9 Series Speed Concept TT bikes.

The Project One Program let's you custom spec a bike (last year Trek offered the Spartacus design, and the special Luxembourg bikes  made for the Schlecks (we saw both bikes at the Tour last year) as Project One options. This year's paint job is certainly to my tired eyes a marked improvement on previous Radioshack team bikes - and has something of the cool simplicity of last year's Leopard Trek team bike… but beauty is in the eye of the beholder and all that so you may disagree. 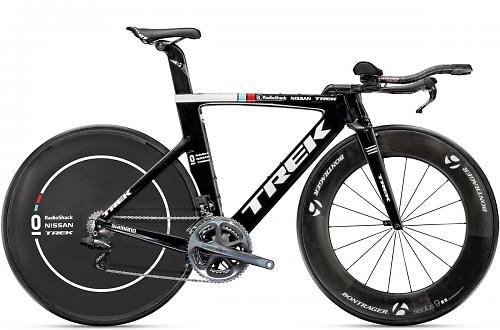 Expectations will be riding high on Fabian Cancellara on his Speed Concept 9.9 time trial bike but most of all on Andy Schleck who is going to need to go faster on his if he hopes to rise to number one third-time-lucky on the Tour de France podium.

A few hours later and on reflection it looks like that apart from the new livery there are no technical changes with either the Madone SSL road or SpeedConcept time trial frames that worked for teams RadioShack and Leopard-Trek last season but then again neither of them are exactly long in the tooth having been introduced at the Giro.

Newer are the Bontrager Aeolus wider-section-for-better-aerodynamics wheels we posted about from Eurobike and the in-house Bontrager brand also provides bars, stems, saddles and bottle cages although not, interestingly it seems, the tyres. Trek have provided studio pictures of otherwise identical bikes shod with both Bontrager and Schwalbe tyres perhaps suggesting that negotiations went right down to the wire. If it does turn out on Monday when all the team press folks are back at work that Schwalbe are indeed the tyre supplier, it will suggest that the German brand has paid a hefty premium for the privilege of appearing on the wheels of arguably the UCI WorldTour top team.

Meanwhile, we're half way through our tour of the eighteen bikes starring under the elite WorldTour professionals this 2012 season with the gallery so far here. With just a week to go until the Tour Down Under starts in Adelaide on Sunday 15th January, we're approaching a fever pitch of anticipation, not helped by road.cc Fantasy Cycling starting now. Have you signed up yet? Andy Schleck in the new kit flanked by Fabian Cancellara and brother Frank in their respective National Champions versions of the jersey design.