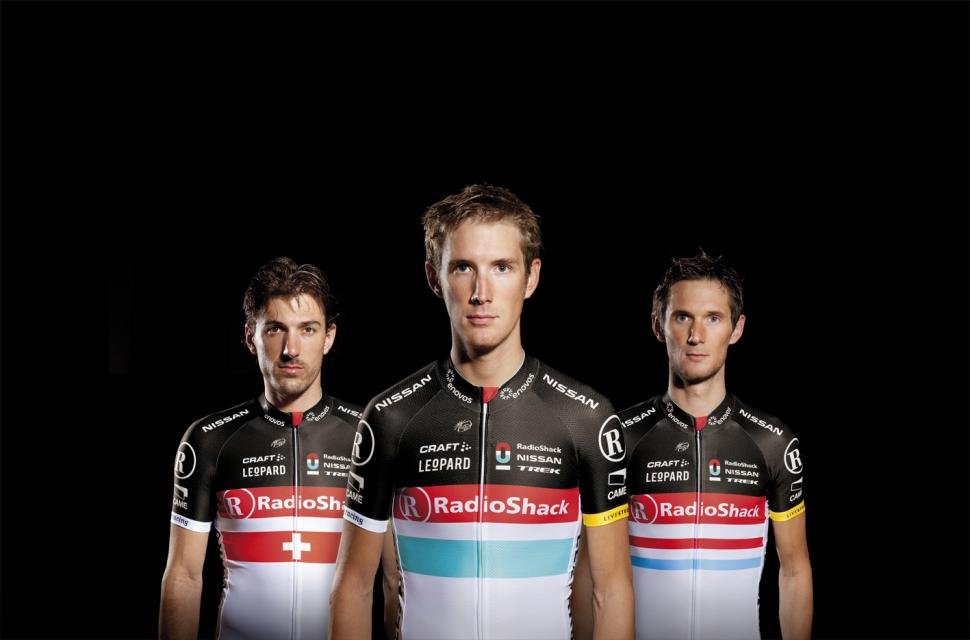 Great Expectations: Launch of RadioShack Nissan Trek ahead of a crucial year on the road

RadioShack Nissan Trek, formed from the merger of two of cycling’s biggest teams, Leopard Trek and RadioShack, was formally unveiled in Luxembourg yesterday ahead of a season in which there will be pressure to deliver victories in the sport’s biggest races.

The team, based in Luxembourg and racing under the licence held by Leopard Trek last year, essentially marries the core of that team's riders with the management of RadioShack, although some riders, including Chris Horner, have also moved across.

At a time when many teams are filling up their rosters with a strong representation of riders from one or two countries, the merged outift will also one of the most international teams in the peloton - 13 nationalities are represented, with Germany providing four team members and Luxembourg, New Zealand, the United States and Luxembourg three apiece.

Besides Fabian Cancellara looking to get some more Classics wins to his name, the Tour de France is the team’s big goal for the year as Andy Schleck aims to finally move up from the second step of the podium.

With almost 100 kilometres of time trialling in the race, he’ll have his work cut out, but the presence as team manager of Johan Bruyneel, who has helped Lance Armstrong and Alberto Contador achieve nine victories between them in cycling’s biggest race, is bound to be a asset from a tactical point of view.

Frank Schleck, third overall in the Tour last year, plus previous top ten finishers Andreas Klöden, Haimar Zubeldia and Chris Horner, look set to provide the core of the team that will support the younger Schleck sibling on the road.

The latter has resisted calls from the likes of Eddy Merckx to ride the Giro d’Italia, seen as providing a parcours this year that is better suited to him than that of the Tour de France, but it will be an emotional race for those riders, led by Jakob Fuglsang, who do take part in the year's first Grand Tour following the death in the race of Wouter Weylandt last May.

While the Giro is going on, Chris Horner will be defending his Tour of California title, which as the biggest race on the US calendar is one in which sponsor RadioShack will again be expecting a strong performance.

Some 5,000 people attended yesterday evenings’s presentation at the Rockhal in Esche-sur-Alzette, which concluded with a performance by Karl Bartos of electro-pop pioneers Kraftwerk that despite kicking off with the classic track Tour de France, seemed to leave much of the crowd bemused. It’s been a while since we’ve seen a dance floor empty that quickly.

Before that, there had been the first look at the team’s new kits, essentially the same as the Leopard Trek one from last year, with the inclusion of a red band bearing the RadioShack name – the effect being to reinforce its Luxembourg connection by reproducing the red, white and pale blue bands of the country’s flag.

For the various national champions’ jerseys, the pale blue hoop disappears and is replaced by bands with the respective countries’ flags – including the red white and blue of Luxembourg for Frank Schleck and red with a Swiss cross for Fabian Cancellara.

Rather strikingly, there’s also the Stars and Stripes for Matthew Busche, in our book a stylish departure from some of the apparently comic-book hero-inspired incarnations of the US national champion’s jersey seen in recent years. The tone was less glitzy than last year’s showbiz-style launch of Leopard Trek in which the flamboyance of the scarves the riders wore was matched by some of the acts brought in to amuse the crowd including, bizarrely, a man in a zebra suit. In the earlier press conference, the suits and scarves of 2011 had given way to comfy cardigans.

Streamed live to more than 2,000 people around the world – many of whom appeared to be on Twitter, commenting on how mundane it all seemed – it was, more than anything, a workmanlike launch ahead of a season in which the team will be expected to do the business on the road.

In its debut season in 2010, RadioShack ended the Tour de France – the only one of the three Grand Tours it rode that year – as the leading team, but Lance Armstrong was never a contender in what would be his final participation in the race he once dominated.

Overall wins by Chris Horner in the Tour of the Basque Country and Janez Brajkovič in the Critérium du Dauphiné were the high points in that first season, while last year the team experienced a wretched Tour de France, only five riders making it to Paris.

Leopard Trek at least got two riders onto the Tour de France podium in Paris through Andy and Frank Schleck, but the maillot jaune still eludes the former, who has now been overall runner-up in each of the past three years.

Fabian Cancellara had been expected to dominate the Spring Classics but narrowly missed winning a Monument, with podium positions in Milan-San Remo, Paris-Roubaix and the Tour of Flanders.

In the final kilometres of Liege-Bastogne-Liege, the team seemed poised to claim its first really big win with the Schleck brothers enjoying a two-to-one advantage over Philippe Gilbert in a three-man break, but inexplicably they failed to press home their advantage. Both are targeting the Ardennes Classics again in the coming season.

When Leopard Trek’s big Classics victory of 2011 did arrive, it was late in the season and from an unheralded source, with Oliver Zaugg picking up his first in eight years as a pro at the Giro di Lombardia.

There will be expectations on the part of the team’s management and sponsors that its big-name riders will step up and achieve victories of a similar stature in 2012.