What do the new Bontrager Aeolus D3 wheels, Zipp’s new 303 Firecrest wheels and Wilier’s new Twin Foil TT bike all have in common? A larger frontal area than many existing products – yet the manufacturers all claim aerodynamic benefits for their designs.

Do a poll of what factors cyclists consider vital for good aerodynamics and a small frontal area would be right up there. It’s common sense. The lower the area presented to the wind, the less drag to slow you down… Zipp’s Firecrest wheel rim profile is wide compared to many other rims out there. The brake track is 26.2mm wide and the widest part of the rim is 28.5mm. That compares to the rim width of the Mavic Cosmic Carbone Ultimate, for example, of 21mm. And rather than tapering in gradually, the width of the Firecrest rim is maintained, dipping into the spoke bed right at the last moment. They’re fat, basically. Why do Zipp design their wheels like this? It’s to control airflow at the back half of the wheel. Rather than just concentrating on the airflow coming off the tyre, it’s to manage the aerodynamics of the section of the wheel that’s trailing the hub. They reckon the wide Firecrest 404 (58mm deep) has aerodynamics that match their pre-Firecrest 808 (81mm deep) – and it's lighter and more stable in a crosswind. Bontrager have entirely redesigned their Aeolus wheels with a new D3 (Dual Directional Design) rim shape that, like Zipp’s Firecrest profile, is designed to reduce drag at both the front (the tyre-leading side) and the rear (the rim-leading side). The 50mm-deep Aeolus 5 D3 clincher is a different shape from the Firecrest but it’s also wide: 27mm across. Bontrager are, of course, claiming that their wheels are the most aerodynamically advanced out there.

Bontrager say, “Bontrager Aeolus D3 wheel achieves a drag performance comparable to the next depth class from either Zipp or HED, and the Aeolus 9 D3 is in a class of its own as the fastest non-disc wheel in the world.”

In other words, they reckon their wheels are as slippery as deeper-section wheels from other manufacturers. In their white paper (white papers are all the rage for presenting new technology these days), Trek engineers Paul Harder and Jordan Roessingh say,“The primary reason wheels have become more aerodynamic over the past few years is the trend toward wider rims…

"A wide rim is able reach out and “catch” the flow that separates off the tire before it can create a massive wake… The Aeolus D3 profile strategically coaxes the flow to not only reattach to the rim, but also to stay attached as long as possible.”

So, (apart from learning that Americans don’t know how to spell ‘tyre’) we find out that fat is where it’s at… up to a point. “A wider rim has more frontal area, resulting in a drag penalty at… low yaw angles where the flow would stay attached to a narrower rim. Therefore, wider is only better to a certain limit, at which point the penalties begin to outweigh the benefits.”

The yaw angle, if you don’t know, is the apparent wind caused by the actual wind and the movement of the bike.

[The Bontrager white paper contains a load of interesting information on rim depth and the role of tyre width too. Check it out if you’re interested in aero performance – but bear in mind it is produced by a manufacturer that wants to sell product. We’d bet the guys at Zipp will take issue with the testing protocols and so on]. The brand new Wilier Twin Foil TT bike doesn’t use the same technology as either the Zipp or the Bonty wheels but it’s interesting that this is another new product that breaks the rule that you have to be thin to win. 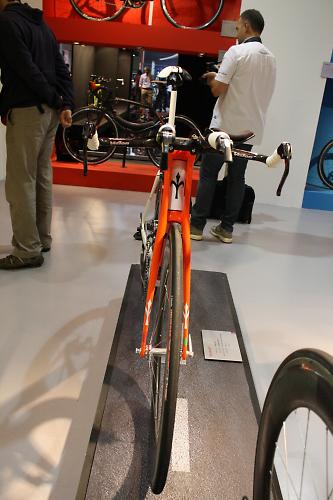 It’s a skinny bike, there’s no doubt about that, but the designers have added extra material at the front. Rather than stopping at the crown, the fork legs extend upwards to form the stem. So rather than just a steerer inside the head tube, you get the head tube plus a stanchion on either side of it. To most people, this is counterintuitive, but the Wilier guys reckon they’ve got the wind tunnel data that proves it works. The idea is that the extended fork manages the airflow over the front section of the bike and the widely spaced (rather than sloping) seatstays do a similar job at the back. The two ends work together to minimise turbulence and drag.

What does all this prove? The point is, new products on display at Eurobike demonstrate that aerodynamics isn’t just a matter of looking at silhouettes and going for the smallest. Aerodynamic isn't a visual thing. Yes, all other things being equal, the smaller the better as far as frontal area goes… but all other things never are equal so check out the tech before you part with your cash.