What do you know about Stevens bikes? Not a great deal, we’re guessing, but the German brand has just got UK distribution through chain/online retailers Hargroves Cycles and we’ve had the chance to try out their Xenon road bike over the past few weeks.

Stevens – not a typical German name, that – have been around since 1990 and the range today is large. Hargroves stocked a small number of Stevens bikes in 2011 but they’re rolling out loads for 2012 – dozens of ’em, in fact. The lineup takes in mountain bikes, city bikes, cyclocross bikes, time trial bikes, road bikes, pedelecs… they’re covering a whole lot of ground here. Most are available now and those that aren’t will be here soon.

We’ve been riding the Xenon road bike – the 2011 version, although the frame remains basically the same for 2012. It’ll be available as a Shimano Ultegra Di2 model at £2,799, and with either a compact or triple chainset and mechanical shifting at £2,249. Go for just the frameset and that’ll be £1,249.

The frame is made form unidirectional high-modulus carbon fibre and it comes with a tapered head tube. Like many other manufacturers, Stevens have upped the size of the lower headset bearing from 1 1/8in to 1 1/4in to add extra beef, especially during out-of-the-saddle efforts. They’ve gone for a press-fit bottom bracket too rather than a screw-in outboard type – BB86 standard – for a little bit of extra stiffness when you crank up the power. 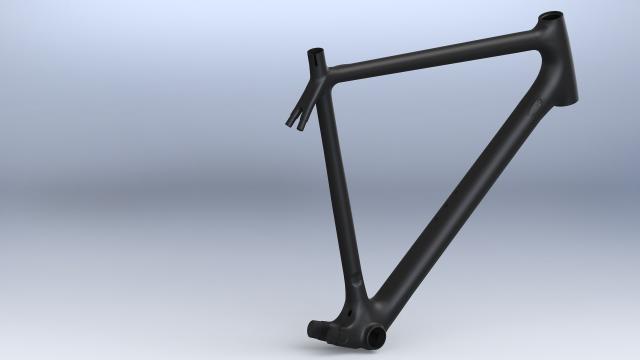 The front triangle is made as a monocoque so it’s light and stiff, then the chainstays and seatstays are bonded in place (the image is actually the Stratos, see below, but it's made in the same way). This allows Stevens to use the same chainstays and seatstays for different frame sizes, keeping the cost down without any disadvantages in terms of stiffness or frame weight.

You couldn’t say the resulting frame is the most distinctive ever – that might be an issue for you, it might not – but it’s certainly a tidy piece of work. That head tube flows into a large-diameter down tube that reaches across most, although not quite all, of the bottom bracket shell, while the top tube slopes downwards just slightly towards the seat tube.

Stevens haven’t gone overboard with the shaping out back. The round profile of the seatstays becomes triangulated in the central section but they’re almost completely straight from the seat tube down to the carbon dropouts. At the other end, the fork is full carbon; there’s no alloy steerer hidden away inside the head tube.

As for the geometry, our 58cm model has a 570mm effective top tube, a short but not excessively short 175mm head tube, and parallel 73.5° frame angles. Hargroves reckon it’s a sportive bike… It could be. It depends on your definition of a sportive bike. A Specialized Roubaix, for example, in a comparable size comes with a considerably longer head tube and a more upright ride position. We’d say the Xenon has quite an aggressive, racy setup… which is perfectly legitimate approach for sportive riding, just as long as you’re clear what you’re getting.

Our complete Xenon (less pedals) hit the scales at 7.54kg (16.6lb). That was with a Shimano Ultegra groupset – which is part of the 2012 spec – Shimano RS30 wheels and a Pro aluminium cockpit – which aren’t. How does it ride? Both Mat and Dave spent a decent amount of time aboard the Xenon and the consensus was that this is a solid bike – solid in that it does everything pretty well. We wouldn’t say we were blown away by any particular aspect of the performance, but it doesn’t have a particular weakness either. Solid.

The best feature of this bike? Its stiffness, especially at the front end which makes charging through downhill bends a whole lot of fun. Oh, and it’s a smooth ride too. The back end of the frame is surprisingly buzz-free. It’s not up there with something like a Cannondale Synapse for vibration damping but it’s certainly comfortable enough for long hours in the saddle.

Our sample bike was light but not mega-light for the price. The frame, though, is a bit of a featherweight. We didn’t strip it down to check but Hargroves tell us it was 972.5g (for this 58cm size) before they built it up, and that the forks are sub 350g.

Our Dave swapped off the Shimano RS30 wheels for some Strada Velocity A23s and the bike was instantly more lively… as you might have predicted. RS30s are reasonable wheels but they’re not especially lightweight. The Stradas are about 400g lighter. We’d suggest you need something similar if you want to make the most of that frame. 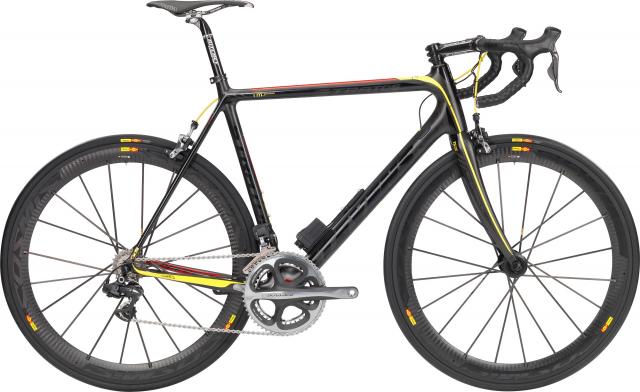 The Xenon is actually the fourth tier carbon road frame from Stevens. The top model is the Stratos. They’re claiming a superlight 830g weight for that one (56cm), and a 310g fork. That’ll set you back £1,999. For details on the entire range go to www.hargrovescycles.co.uk or check out www.stevensbikes.de.