Hard to believe it's a helmet that looks just like a cosy beanie but there's serious science going on inside...
by nick_rearden

The Swiss folks at Ribcap have started shipping their soft CE-certified helmets to the UK. In fact, when we spoke to Brick Lane Bikes this morning they were quite literally unpacking the boxes.

As the Gadget Show YouTube snippet below shows, the Ribcap helmets are soft just like a thicker than usual beanie but when struck hard with the kind of impact that would do your head no good at all, the clever material within the natural wool structure of the hat stiffens to provide protection.

The magic word here is dilatancy a materials characteristic where viscosity increases with shear strain or what us non-scientists might call impact. Not convinced? The CE helmet-testing folks have been and the boys at Brick Lane Bikes have been hitting each other's heads with surprisingly hefty workshop tools, they say.

Prices range from £69.99 to £79.99 in three models including a fluffy one called Björk, plus kids' sizes. There is also a 'Palmer' model with integral face mask which skiers, snowboarders and extreme mountain-bikers are likely to like.

It is worth adding though that although they have CE approval Ribcap themselves make it clear that their soft helmets don't offer the same "protective effect" as a hard lid, especially those with the more stringent Snell-type certification, but they do offer a significant amount more impact protection than not wearing anything at all. They're certainly warmer.

Eight cosy garments comprise the new VB Ella women's-specific range from Velobici. Like the established male equivalents from the Leicester-based knitting brand, the inspiration is distinctly soft and casual, more leisure-with-cycling rather than hard-core Lycra-clad suffering but that makes a nice change. The gloves for £25 are seamless, the Velobici knitting speciality, and made from 70% Merino wool and 30% Alpaca wool for an extra-luxurious texture and there are hats, scarves and stripy arm-warmers too. There have already been discussions here about whether men could also get away with the stripy armwarmers.

No sooner had we posted our Christmas Book List than word arrived of a new coffee-table tome called Bike Art which apart from cycling-themed art from all around the world includes our own favourite GB-based cycling artist James Straffon. As of today and up until 9th January 2012 James' latest work will be on display at Foyles the famous bookseller on the Charing Cross Road in London. 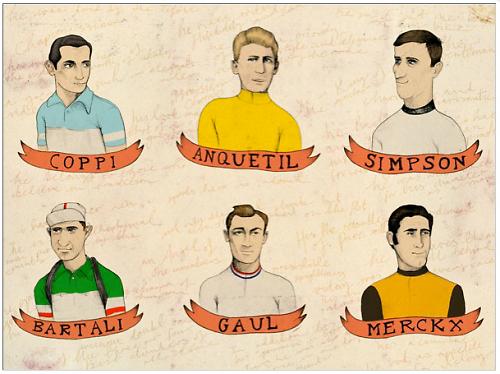 Home-grown clothing makers Shutt VR have fallen on their feet with latest recruit Lauren Peppiatt who is a talented artist and they haven't wasted a second getting her work on the Shutt site. There are five limited-edition prints featuring such contemporary cycling stars as Fabian Cancellera and the Manx Missile but the one we really like is this 'Legends' print with caricatures from cycling history.

Milltag publish their 'Draw A Bike' project for Cancer Research 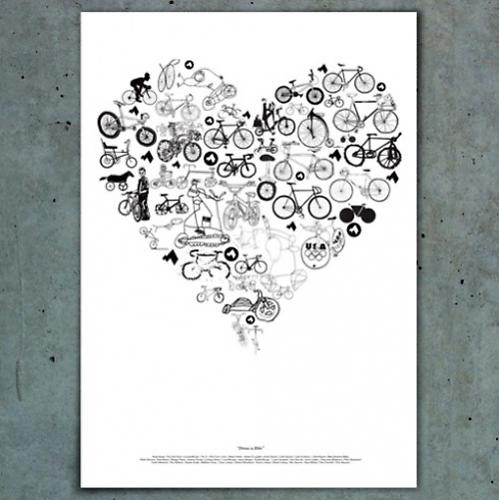 Tee shirt printers Milltag have been soliciting bike drawings from their twitter followers for months and they've just published the result; a heart-shaped compilation of all the submissions complete with names in an art print. The £15 price all goes to Cancer Research