If Hollywood writers submitted a love story based on the home life of the first five-time winner of the Tour de France Jacques Anquetil who died in 1987, the focus groups would throw it out for being far too unlikely. James Straffon, an artist with a passion for cycling, hopes to convey some of the French champion's own passion in a triptych titled 'Le Baiser de sa femme Janine' - the - ahem - kiss of my wife Janine.

How can we put this? Anquetil and his wife Janine married in 1958 but she appeared unable to produce children with Anquetil so she suggested her own daughter 18-year-old Annie by her first husband - Anquetil's doctor - as a surrogate mother for new offspring. Which duly arrived in the form of Sophie who went on to write a book in 2004 'Pour l'amour de Jacques' revealing not only the name of her hitherto secret father but that the dangerously alluring cycling star had also gone on to form an alliance amour with Sophie's brother Alain's wife Dominique. Or to put it another way; Dominique, the wife of Janine's second child Alain, who also produced a child by Anquetil. Blimey.

Here is James Straffon on his own painting:

"Le Baiser de sa femme Janine is a work fused with tension and drama. The backdrop is the 1961 Tour de France, which race organiser Jacques Goddet later termed a 'fiasco'. It would be the last Tour to be contested by national teams - the 1962 Tour de France heralded the familiar structure of the modern era, with its peloton composed of sponsored teams. In 1961 Jacques Anquetil held the leader's yellow jersey from start to finish, a feat he arrogantly announced before the race had even begun. Such chutzpah perfectly illustrated the man who would be known as Maître Jacques.

Pursed lips lay at the epicentre of Le Baiser, yet both sets of eyes look outwards. This central tableau is bookended by the man himself - eyes bowed in contemplation, a bead of sweat running off one cheek. These two identical views are created from original front covers of magazine Miroir Sprint.

Such mute reflection conceals the intricate memoirs of an enigma. Hidden behind a secret kiss." 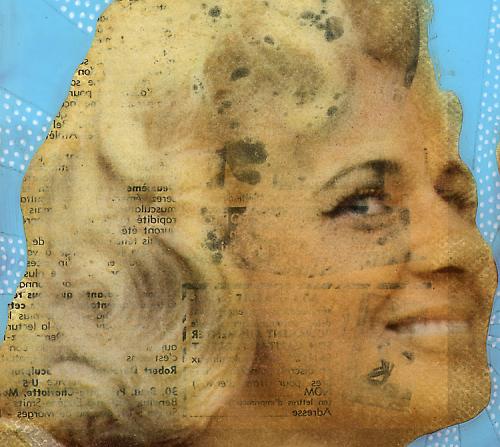