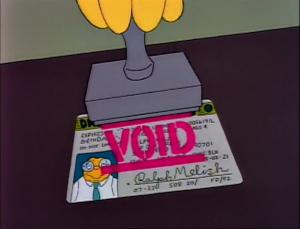 However, that represents less than 1 in 10,000 drivers - and with ageing population, problem will only worsen
by Simon_MacMichael

The number of motorists who have had their driving licences taken away because their vision is too poor for them to drive has jumped sharply over the past four years - although that only translates to less than 1 in 10,000. Meanwhile, with Britain's ageing population, more than 3 million people aged 71 and older, many of whose vision will be deteriorating, now hold a driving licence.

According to a report on MSN News UK, following a Freedom of Information request, Co-operative Motor Group discovered that some 4,009 motorists had their licences withdrawn due to poor eyesight in 2010, compared to 1,597 in 2006, an increase of 151 per cent.

Co-operative Motor Group managing director Tony Guest commented: "Good eyesight is essential to safe motoring, and we would urge anybody who has concerns over their vision to contact a specialist. There is no room for complacency when it comes to road safety."

The law requires that any driver who is concerned about their eyesight should visit a doctor or other qualified professional, and if they are told that their condition means it is dangerous for them to drive, they are required to notify the Driver and Vehicle Licensing Agency (DVLA). Should they not do so, they may be liable to a fine of up to £1,000 and their motor insurance may also be rendered invalid.

According to the DVLA’s annual report for 2010/11, the agency closed some 719,027 medical cases during that year. In terms of licensing decisions it was required to make as a result, some 247,094 full licences and 196,531 short period licences were issued, while 30,993 licences were either refused or revoked.

With some 44 million driving licences currently issued in the UK, according to DVLA statistics, however, less than one in 10,000 motorists had their licence withdrawn as a result of poor vision in 2010.

That's despite more than 3.6 million of those licences are issued to people aged 71 and over, a segment of the population particularly likely to suffer from deteriorating vision.

Currently, drivers in the UK are required to reapply for their licence on their 70th birthday and every three years thereafter, with the onus on the driver to notify the DVLA of any change in their medical circumstances, including their eyesight.

It therefore seems reasonable to assume that many people with poor eyesight or other health issues are continuing to drive without seeking medical advice, perhaps fearful that they will no longer be permitted to drive – a theme explored in a 2010 BBC documentary, Taking The Keys Away.

Earlier this year, a report from road safety charity the RAC Foundation compiled on behalf of the International Longevity Centre – UK maintained that “when older drivers are deciding whether or not to continue using their cars they find there is a marked lack of support and information available to help them make the appropriate decision.

“This means many drivers will retire from driving at too early a stage while others will go on beyond the point where it is safe to do so.”

Currently, drivers aged 70 and over are required to re-apply for their driving licence The report added that “Given the importance of eyesight to driving, the role of opticians also needs to be clarified and enhanced.”

It added that “Where significant problems with eyesight exist, opticians must surely have a ‘last resort’ duty to inform the DVLA so that appropriate measures can be taken,” but acknowledged in a footnote that “Opticians seemingly do have this duty at the moment, but it is not commonly used, not least because they do not have an appropriate test to use to deduce whether people’s eyesight is fit to drive.”

“However,” the RAC Foundation went on to say, “care must be taken that this duty does not lead to fewer older people seeking the advice of opticians regarding their eyesight, for fear of losing their driving licence - indeed opticians are likely to oppose any policy which may lead to such an outcome.”

With an ageing population, this appears to be a problem that is only going to get worse, so some clear guidance is needed from the Department for Transport or the DVLA for both older drivers and doctors and other healthcare professionals such as opticians. As ever, this should reinforce the fact that driving is a privilege, not a right, even for the elderly.