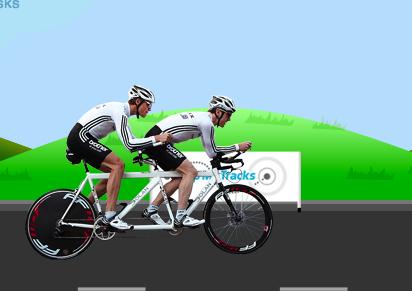 Olympic champion rower turned adventurer James Cracknell, who suffered serious head injuries when he was hit by a truck while cycling in Arizona last year, is currently heading towards Bristol as he attempts to break the Land’s End to John O’Groats non-stop tandem record, piloted by Jerone Walters.

In trying to beat the record of 50 hours and 14 minutes that has stood for 45 years, the pair are aiming to raise money for the Headway brain injury association, without whose support, they say on their Virgin Money Giving page, “James would not be undertaking this event.”

On the way though they will have to contend with what is forecast to be the hottest October day in England since record began, although according to the weather forecast they should hit more typical weathr for this time of year the further north they go.

It’s not the first time the pair, riding on a Terry Dolan-designed frame called Rocket 2 – Rocket 1 is the back-up frame, bythe way – have attempted an End-to-End record together.

“I’ve unfinished business with the tandem from Land’s End to John O’Groats,” said Cracknell in his Daily Telegraph column yesterday.

“Two years ago I set off with Rebecca Romero, the world champion rower and Olympic champion cyclist, in an attempt to break the mixed tandem record.

“I had conveniently managed to persuade myself that riding with an Olympic champion wasn’t cheating, but even the strongest mental attitude couldn’t have coped with the swelling around Bec’s knee. We made the sensible decision to stop and avoid risking long-term damage with London 2012 in her sights.

“So when Jerone said he fancied having a go, I jumped at the chance. He’s a semi-professional cyclist and covers a 25-mile time trial in less than 50 minutes.”

Cracknell says that his “ogre-like weight and gear selection aren’t conducive to easy cycling speed,” leading to his being assigned the role of stoker for the 842-mile ride, which began at 3am this morning.

Talking of the Road Records Association’s rules governing the attempt, he writes: “The lead or ‘pioneer’ vehicle has to stay out of our sight so that it cannot aid our progress. The vehicle following has to maintain a 50-yard gap thus shielding us and warning other drivers (via its flashing lights) that a cycling event is in progress.

“No support, encouragement, guidance, progress update or food can be passed from a moving vehicle,” he continues. “Instead, our helpers have to get ahead, leave the car and hand us musettes (food bags) as we pass.

“Car-to-rider radios are allowed, but cannot be used for pacing reports or encouragement. The RRA’s rules mean the onus is on us, which is why breaking the record will mean so much.

“It’s a massive team operation, from the route planning through to our support crew on the road: a physio, nutritionist, mechanic, drivers and someone checking the route for unscheduled roadworks.

“But that’s just the start of their role,” adds Cracknell. “During my previous record attempt with Rebecca, they had to act more like bodyguards as we rode through Warrington at 10pm on a Saturday night. A few hours later, in Wigan, the support van was mistaken for a minicab by enthusiastic ‘customers’ demanding a lift home.”

You can follow the pair’s record attempt through the website Map My Tracks, whose blog also highlights a variety of other ways you can follow their progress, including via an iPhone app.