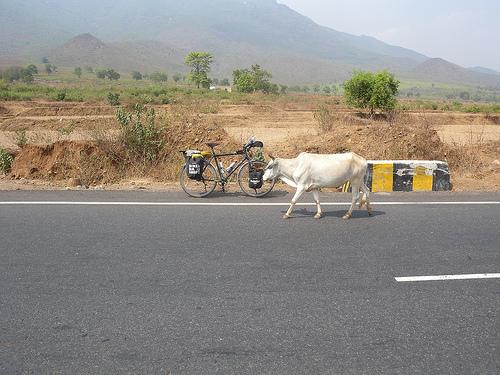 Indian is behind him and so is a fair amount of his former body weight. Bring on Thailand!
by Tony Farrelly

India is done with James and he's now resting up in Bangkok with Thailand, Malaysia and Australia ahead of him. Before he sets out again, though lets look back at his adventures on the Sub Continent…

If riding around the world at a record pace was easy we'd all be doing it. That point was rammed home by the last few weeks in India and Iran. While Iran dealt James some tough psychological blows with real fears for his safety India proved to be a massive physical challenge with a constant battle against heat, sickness and dehydration.

Since leaving Istanbul James has lost 15Kg in body weight - most of that in India where he was continually struck down with various stomach bugs one of which brought him to an unscheduled halt last week. Consistent to the end India's parting gift was a final dose of food poisoning picked up at Calcutta airport en-route for Thailand.

Riding a bike while ill or recovering from illness is never easy, it's even harder when you've got a punishing schedule to keep to and you're doing all of that in searing heat and humidity so James has done incredibly well to keep on track. He may have found most aspects of Inida over-whelming from the weather to the inquisitiveness of the people but when this is all finished India will certainly furnish him with some vivid memories.

In the two weeks riding from Amritsar to Calcutta, James has ridden the Grand Truck Road sharing it with trucks, mopeds, and elephants, and found himself playing a small part in the elections taking place in the world's largest democracy. He has also ridden a fair chunk of miles. To get a flavour of his Indian experience check out the photos he has added to www.whereinthworldisjames.com the gps tagging site on which you can follow the progress of his ride. James has also just updated his blog –

Nobody said that attempting to break the record for cycling around the world was going to be easy but after his Indian travails where does this leave James's record schedule? “The forced 3 day rest from illness has set the bar even higher for the rest of the trip - but the hardest roads are behind me,” he told road.cc earlier today.

Tomorrow he hits the road in Thailand, today he's refuelling on Macaroni cheese and ketchup.

James is doing this ride to raise money and awareness for research into Parkinson's disease. The total raised so far is £37,817.38 and he is 3 per cent of the way towards his goal of raising £1.8m. If you want to support James in his quest you can donate at his site www.globecycle.org, you can also follow his progress via live GPS updates at www.whereintheworldisjames.com and he also has his own video channel on Youtube.