Joaquin Rodriguez of Katusha today took his second stage win of the 2011 Vuelta and with it the race leader’s red jersey. With an individual time trial looming on Monday – a discipline in which he is notoriously weak – he may have trouble holding onto it beyond tomorrow, despite looking the strongest rider in the race so far.

As with Wednesday’s Stage 5 to Valdepeñas de Jaén which the 32-year-old won, today’s Stage 8 was another medium mountain stage that packed a real sting in its tail, and like its predecessor saw a brief but punishing climb to the line.

Among those watching today was Tour de France race director Christian Prudhomme, who enthused afterwards: “This was an incredible finale with an enormous number of spectators! The uphill streets leading to the line are like those in San Francisco. The environment is magic with the view on the lake and Madrid on the horizon. I’ve been impressed. What a great day for cycling!”

Those sentiments weren’t perhaps shared by most of the riders, however, for whom the closing one-kilometre climb, with ramps of 28 per cent in places, was something to be endured rather than enjoyed.

“The finale of El Escorial was harder than the one of Valdepeñas de Jaén where I won Stage 5,” Rodriguez confessed. “Here the false flat sections at 20% really hurt.”

The Katusha rider revealed that he had done his homework, however. “It was useful to know the course,” he admitted. “I came to reconnoitre it in July with Dani Moreno who lives nearby and it has helped me to win. I knew where to impose my rhythm, where to sit on the bike on the false flats and where to accelerate again.”

Last year, Rodriguez had been leading the race by 33 seconds going in to the Stage 17 individual time trial, but lost more than four minutes to eventual winner, Vincenzo Nibali. The Spaniard is keenly aware that he needs to maximize his opportunities on those stages that suit him.

“I knew before the Vuelta that I have to gain a maximum of time bonus and I target it at the uphill finishes because I’m aware that I’ll lose a lot of time on Monday from riders like Bradley Wiggins and Janez Brajkovic,” he said. “I’ll try to increase my advantage tomorrow. In the time trial, I’ll lose at least 2 minutes 30 seconds.”

Speaking of tomorrow’s summit finish, he continued: “La Covatilla isn’t my favourite climb but with the condition I have, I should be able to get some time over riders like Wiggins and Menchov.

“My obsession isn’t to have the leader’s jersey but to control the stages, to win them and to take time bonus over the people I was telling you about,” he added.

He can at least he can have faith in his Katusha team mates’ ability to support him, after they again put in a strong performance today at the front of he bunch to keep a variety of breaks and attacks in check ahead of the rousing finale. Katusha in control at the front of the bunch (copyright: Tour of Spain/Graham Watson)

It was only Michele Scarponi of Lampre-ISD, who finished second, who came close to challenging the supremacy of Rodriguez.

The Italian was first to attack as the riders headed under the flamme rouge, but even he had no response as the Spaniard nicknamed ‘Purito’ overhauled him and rode off to victory.

“Purito was the favourite, we all knew that,” Scarponi acknowledged. “I’ve decided to anticipate his attack, because I knew that if I didn’t do that, I couldn’t go with him. I thought I had created a bigger gap.

“When Purito attacks in a finale like this one, it’s impossible for anybody else to win. I’ve tried, thinking that they would have given me more space. I haven’t managed to win but I’ve demonstrated that I’m up there.”

“I said on Friday that I didn’t have any illusion but I also have no regret,” he reflected following the end of the stage.

“It’s so hard that I’ve lost one minute in one kilometre. I’ve banged my head on the wall. I’ve had the red jersey for four days, it’s been nice and it’s significant. 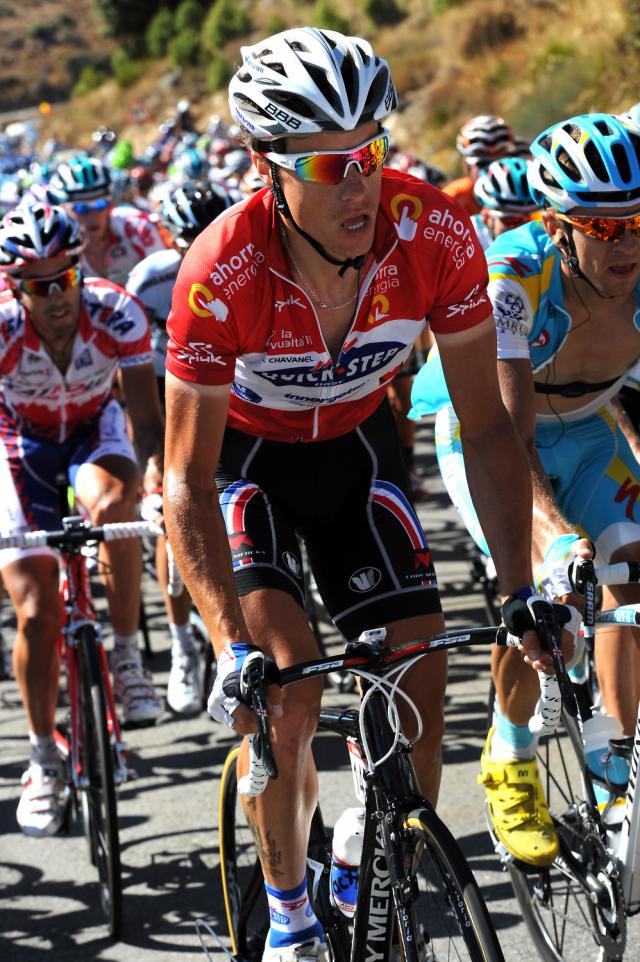 Sylvain Chavanel during his last day in red (copyright: Tour of Spain/Graham Watson)

“The Vuelta is built for pure climbers,” Chavanel added. “Every day, it’s difficult. Katusha has proved today that they are very strong but it’ll be complicated for them to control the race every day. There will be other opportunities by the time we reach Madrid.”

Garmin-Cervélo’s Heinrich Haussler was perhaps alone in describing the day as being in effect a “training” ride.

However, with Tyler Farrar now out of the race as a result of his crash during yesterday’s sprint finish, the rest of the Vuelta will help Haussler prepare for the World Championships in Copenhagen next month, where he will represent Australia.

Haussler was one of a breakaway group of four riders who spent much of the day out in front of the race but were swept up as others launched attacks ahead of the explosive finale. Haussler at the back of the break (copyright: Tour of Spain/Graham Watson)

“That was a hard day and a hard uphill finish,” he said after the stage, “but it was a good day of training for me. I’m definitely going better and better and getting the rhythm, but I try not to go too deep before the world championship.”