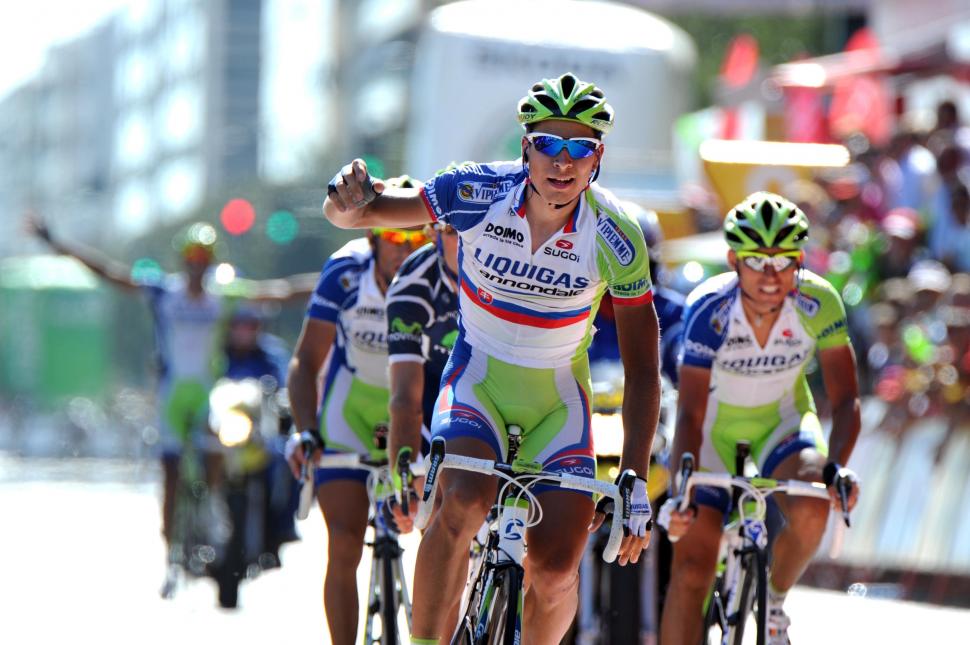 Slovak admits Liquigas would have preferred Nibali to take bonus seconds, but says he had no choice
by Simon_MacMichael

Peter Sagan, winner of today’s Stage 6 of the 2011 Vuelta, admitted that his Liquigas-Cannondale team’s plan for defending champion Vincenzo Nibali to cross the line first and take a 20 second bonus was thrown into disarray as Movistar’s Pablo Lastras launched himself at the line.

The Spaniard was the sole non-Liquigas rider in the group of five contesting the finale after the Italian team went full gas on the descent from the day’s final climb, crested some 20 kilometres out.

Happily for Liquigas, given their four to one advantage, Sagan was in a position to respond and rescue victory from the jaws of what would have been an embarrassing defeat, but the 21-year-old had little time to celebrate his first Grand Tour win as Nibali, perhaps unaware of how close Lastras had come to winning, berated his team mate.

Talking about the attack that he launched alongside Nibali, Valerio Agnoli and Eros Capecchi, Sagan said: “Vincenzo wanted to go and ride at the front. So we did it as a team and we made it a group of four from Liquigas-Cannondale in the lead in the downhill. We went flat out. We wanted to create a gap. We also wanted to make Nibali win because he would have collected the twenty second bonus, but Movistar rider [Pablo Lastras] was there with us and he forced me to go for the win.”

Despite his youth, Sagan is in a rich vein of form, today being his twelfth victory of 2011. “My wins in Poland two weeks ago made me believe that I’d be able to reach some success at the Vuelta as well”, he reflected. “I’ve made it today and I’m interested to finish my first Grand Tour. I only focus on arriving in Madrid. I don’t want to make any plan for the world championship or for next year.”

As for his team leader, whatever was said between them at the end of the stage, Sagan still has faith in the Sicilian’s ability to defend his Vuelta title. The “Nibali is also a young and strong rider”, he said. “I’m confident that he’ll win the Vuelta again.”

Liquigas-Cannondale made their move after the Cofidis rider David Moncoutié, just as he had done yesterday, attacked off the front of the peloton on the day’s final categorised climb in his quest to amass points and try and win the mountains classification for an unprecedented fourth year in a row. 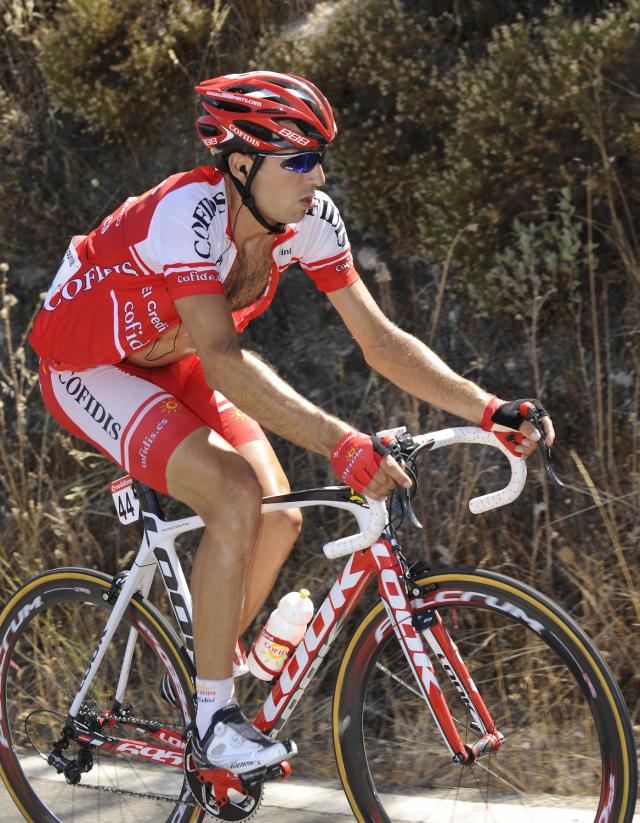 David Moncoutié on the hunt for climbing points (copyright: Tour of Spain/Graham Watson)

Afterwards, the rench rider, who finished ninth on the stage today, said: “This is my second day going on the attack. I have enjoyed it and I wasn’t far from winning. I’m more disappointed than yesterday when I had no illusion before the final uphill. I didn’t have enough of an advantage.”

In an acknowledgement that he may find it tough to defend his mountains title this year, Moncoutié added: “I’ve moved up [to fourth place, ten points down on Dani Moreno] in the king of the mountains competition. The peloton doesn’t let me go away like in the past.”

Sylvain Chavanel of Quick Step remains the race leader and at one point today even found himself in a large breakaway group, as the Frenchman explained: “The beginning of the stage has been crazy and I can say that everyone, myself included, was suffering. I ended up in a group of 23 escapees. 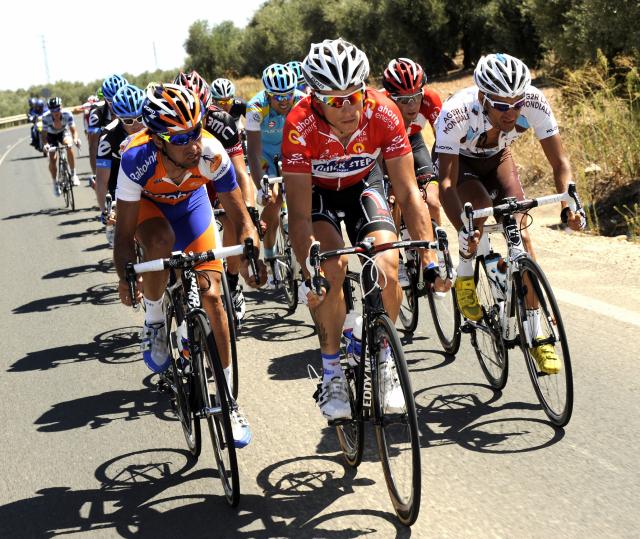 “We got a lead of thirty seconds and I wasn’t going to wait for the peloton for sure! It has given a bit of a break to my team-mates. Once four riders took over from us in the lead, the highest ranked of them was at 50 minutes on GC, therefore we didn’t have to ride behind, we gave way to the teams of the sprinters. Most of the work has been done by the team Leopard-Trek and above all Fabian Cancellara.

Referring to what proved to be the decisive move of the day, Chavanel said: “I don’t want to make controversial comments but after the summit of the last climb, the Liquigas riders have profited from the TV motorbike. I was following them. I maintained a certain distance for safety but at some stage, I couldn’t catch their wheels anymore. They were riding quietly in the slipstream.

“However,” he added, “it doesn’t ruin my pleasure to keep the red jersey. It makes it one more day in the lead. Stage 7 seems to suit the sprinters, so I should be able to stay atop.”

Team Sky’s Kurt-Asle Arvesen, who crashed heavily on a descent yesterday when he collided with a child who was running across the road, was among four riders to abandon the race today. 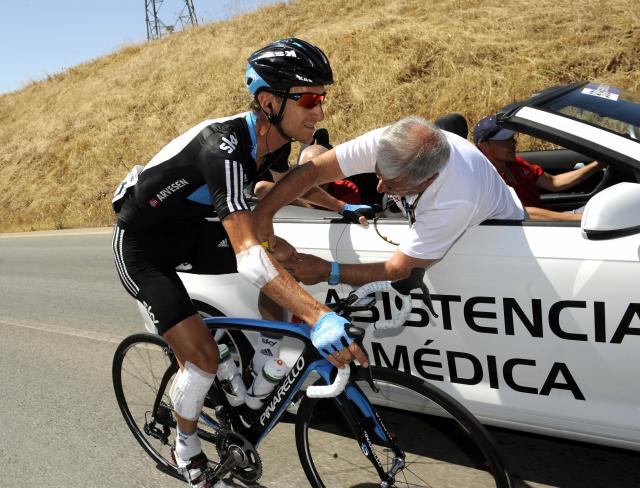 The others were Nicolas Vogondy of Cofidis, BMC’s Johann Tschopp, and Matti Breschel of Rabobank. The latter broke bones in his hand during a crash while the race was still neutralized. Runner-up to Thor Hushovd in last year’s World Championships, it looks as though the Dane will miss out on the chance to go one better in his native country next month.