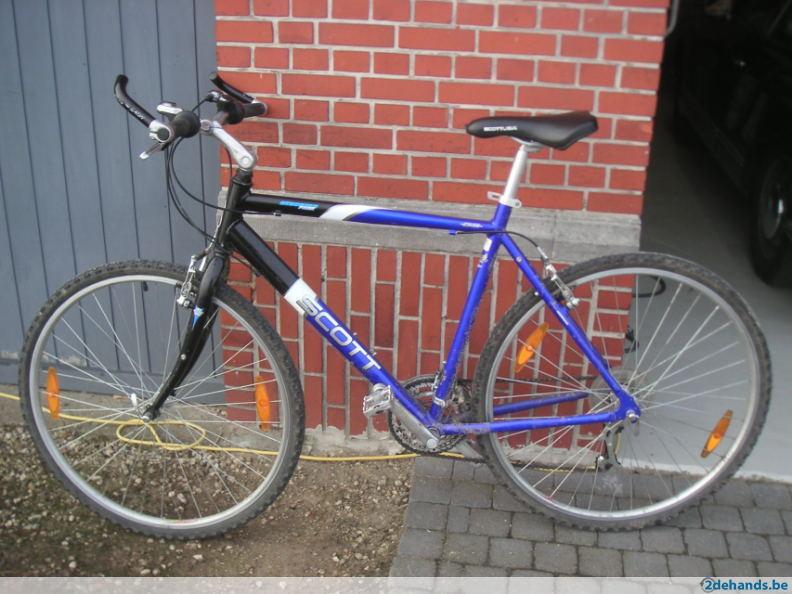 Have you seen a four-year-old Scott Hybrid, black and silver with blue bands on the top and down tubes? Answers to the name of “old friend”. It's probably somewhere in west London, although I just spotted one parked up while nipping to the shops here in Bath…

Anyway. If you have seen such a bike looking like it's lost its owner the Tory leader would like to hear from you. He had his bike stolen for the second time this morning this time from the railings outside his home in London.

We've had some of the best hybrid bicycle identifying brains in the country working on this and we're saying it's a Scott Atacama, circa 2005/2006, but it could be a Sportster. Udate on that, the guys at Scott reckon it may be older than that poss even a 2000 Atacama Pro. If you know what it is let us know.

The bike pictured is like the one stolen, but Mr Cameron's is silver at the back and has a rack, so practically identical then… in a police photofit kind of a way.

According to the BBC the bike was chained up outside his house at 0710am but was gone an hour later… it would be interesting to know what type of chain Mr Cameron was using. Anything reasonably hefty should have required bolt croppers – unless of course the lock it was used with was a cheap one. If it was locked properly you'd have thought someone would have noticed a person carrying a pair of bolt croppers at that time in the morning outside the home of the leader of the oppostion. Obviously not.

Although bike theft is on the rise and is an increasingly big problem in our major cities, growing along with the rise in the numbers of cyclists, Mr Cameron can count himself unlucky to have been the victim of bike theft twice in such a short space of time. Although there is evidence that some bike thieves are becoming more organised, in the main bike theft remains an opportunist crime, and those most at risk are people who don't lock their bikes properly or at all.

In July last year Mr Cameron's bike was stolen from outside a Tesco store in West London. It was later found in a nearby street and returned to him a few days later.

We hate to hear of anybody having their bike stolen so let's hope he is as lucky this time. Keep 'em peeled!

1
Brexit and the bike industry: how the situation is evolving
2
Near Miss of the Day 526: Flatbed truck driver clips cyclist while attempting mindless overtake
3
Brighton woman riding with her child on her bike sent face-first into wall by another cyclist
4
Near Miss of the Day 525: Cyclist has to thump on taxi window as driver squeezes him into verge
5
Cyclist “seriously concussed” avoiding vehicle on Kensington High Street – where council recently tore out protected cycle lane
6
Three Bora-Hansgrohe riders in hospital after driver crashes into training ride
7
Nail traps laid down against Cheshire cyclists
8
Decathlon to stock new Santini UCI World Champs collection