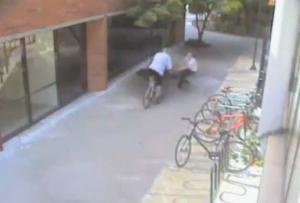 Sometimes, as the saying goes, it takes a woman to do a man’s job.

Step forward a feisty young female known so far only as Kristen, who stopped a San Francisco bike thief in his tracks and saved someone from the heartache of finding their bike missing, possibly never to be seen again.

The incident was captured on security video and shows a man who appears to be well-versed in bike-thieving, targeting what must have been an inadequately secured bike outside the offices of global communications company WCG.

The would-be thief takes a cutting tool from his bag and quickly cuts through what we assume to be a cable before he is – luckily – slightly delayed sorting out the pedals.

Just as he appears to be making good his escape a door bursts open and our heroine enters stage left.

Kristen intercepts the villain in the nick of time, a split second later and he would have been gone. Knocked off balance, the crook drops the bike and his bag just as a couple of Kristen’s male colleagues arrive on the scene.

Then, picking up his bag and pausing momentarily to retrieve an item he drops, the miscreant breaks into a run as he high-tails it around the corner.

Although not apprehended the villain may well be thinking twice before attempting such brazen daylight robbery in future.

Meanwhile there is one very lucky  bike owner in San Francisco who definitely owes Kristen a beverage or two.