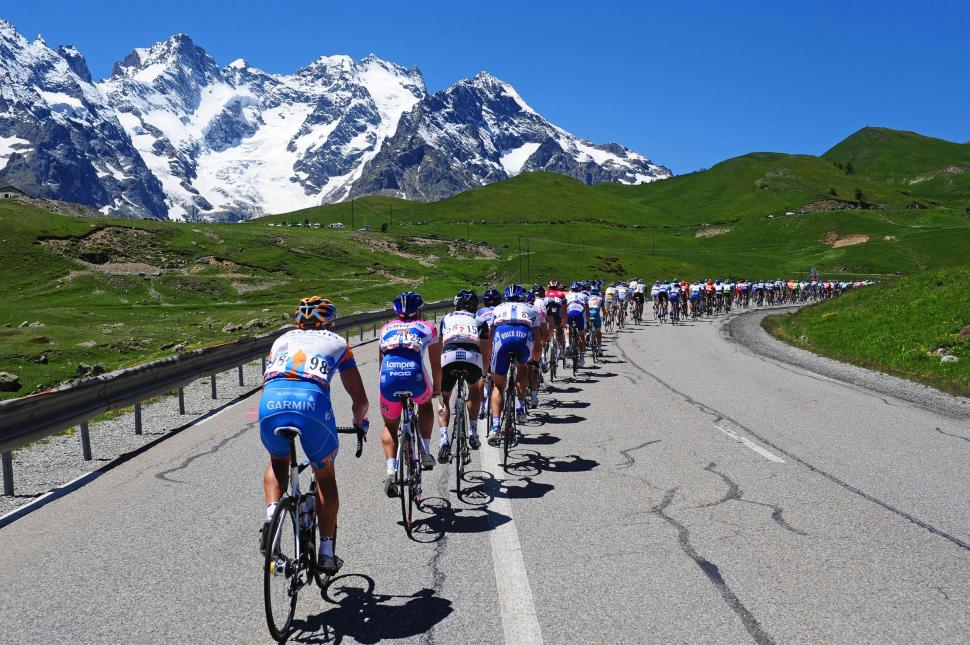 Defending champion Alberto Contador believes that tomorrow’s Stage 19 of the Tour de France, featuring what, at 2,645 metres, is the highest summit finish seen in any of its 98 editions, is “the toughest” left in this year’s race. He and thomas Voeckler also reflected this evening on their different experiences on today's fast final descent into Pinerolo.

It’s the first of two visits in the next two days to the Galibier, which celebrates the centenary of its first inclusion in the Tour this year; after tomorrow’s summit finish, the pass will also be climbed from the other side on Friday on the way to Alpe d’Huez.

Tomorrow, however, features two other Hors-Categorie climbs before the main event, the Col Agnel, marking the border between France and Italy, and the Col d’Izoard.

“I think the toughest stage is tomorrow but the final part of the Galibier is very open and the gradients are not very demanding,” said the Saxo Bank SunGard rider, quoted on his team website.

“It all depends on where the wind comes from,” he added. Alpe D'Huez is short and explosive but tomorrow's stage is definitely harder.”

Yesterday, when he took some time back from his rivals to the overall crown, Contador had repeatedly attacked on the final climb of the day, and he repeated that tactic again today.

On what turned out to be a very tricky 8km descent to today’s stage finish in Pinerolo, Contador and Euskaltel-Euskadi’s Samuel Sanchez seemed to have pulled out a gap over their rivals.

They were rejoined by all the main contenders just shy of the line bar Voeckler, who had experienced a couple of hair-raising moments on the way down and although thankfully he didn’t come off his bike, he did lose 26 seconds.

Reflecting on his near misses, Voeckler said: “I tried to attack at the top of the last climb and to make the downhill but three times I went wide on a corner and the third time I was very, very lucky because I had to jump down a step that was about a meter high.

“I lost time and if I’d been more calm, I could have finished with the favorites but I was a little bit too ambitious. Maybe I wanted too much today.

“I was really scared after the few close calls on the descent but – after the first one – I knew I was just behind Contador and Sanchez but still in front of Schleck and Evans. But then I lost time when I shouldn’t have.

Voeckler has treated every day in the maillot jaune as a bonus – he had been expected to lose it in the Pyrenees, but just as he did in 2004, has held onto it for longer than anyone imagined possible. Nevertheless, the Europcar rider appears resigned to losing it on the way up to the Galibier.

“My climbing has been good but I don’t think it’s good enough for tomorrow,” he admitted. “A six kilometre climb is a lot different to a 35 kilometre one.”

Contador, of course, is one man who stands to profit should Voeckler run into trouble, and the expectation is that at some point tomorrow, the Spaniard will go on the attack.

“It was very, very important to gain on him because he is a great rider who has defended incredibly well in the Pyrenees,” maintained the Saxo Bank SunGard rider, “and any second I gain on him is important.”

Reflecting on trying to get away from his rivals towards the end of today’s stage, the three-time Tour de France champion, who next month heads to the Court of Arbitration for Sport as his doping case from last year’s race drags on, said he was aware of the dangers of that final descent.

“It's the same descent for everyone,” he insisted, “but I didn't take much risk. It was a dangerous descent but I had the situation under control without passing the limits.

“It was very difficult to gain time because many riders were behind to chase and it was easy for them but the important thing is to try every day.”

One observation many have made over the past few days is that Frank and Andy Schleck, third and fourth respectively in the GC, are spending more energy eyeing up their rivals than actually trying to win the race, a fact not lost on Contador. “It seems as though the Schlecks are awaiting me to attack but I just do my kind of race and that's all,” he said.

Given the succession of problems he hit in the opening week of this year’s race, including being held up behind a crash on the opening day and ending up in a ditch himself four days later, Contador has been nowhere near the form that saw him obliterate his rivals in May’s Giro d’Italia.

Like today’s tour de France stage, the final Saturday of the Giro included Sestriere on its intinerary.

“I remember when we passed Sestrieres,” Contador said. “The penultimate day of the Giro is far away but today I knew we were on a typical Giro descent and I had to try, because uphill everyone was watching and the climb was not very hard. I tried which is important.

“Now I'd like to be as strong as in the Giro but I will do what I can. The other riders are very strong and we all have the same motivation. It will be very difficult.”