British bike company Whyte are adding three cyclocross bikes to their range for 2012, one a true off-roader and the other two aimed at commuters. Here's a first look at the Whyte Saxon Cross, Kings Cross and Charing Cross along with a gallery chock full of pics of all three.

Whyte are best know for producing mountain bikes which they've been doing since 2000 and introduced the R7 range of urban bikes last year, but this is the first time that Whyte have entered the cyclocross market and it's a logical step with cross bikes overlapping with both the offroad and commuting markets.

The out and out mud-plugger of the range is the Saxon Cross (£1,299) is made from 6061 aluminium alloy with triple-butted top and down tubes and hydroformed rear stays. The head tube is tapered (1 1/8in top, 1 1/2in bottom) and the bottom bracket is FSA’s new 386 standard, which is essentially a development of BB30. The Saxon Cross is built with a slack geometry – a 69.3° head angle on all four size options – and a host of mud-friendly features. For a start there’s plenty of mud clearance, for example, especially at the back end where the wiggly seatstays are only just in the same postal district as the tyre. And there’s no brake bridge between the stays. It’s not needed because you get post-mounted disc brakes – Avid BB-7 mechanicals. The cables sit along the top of the top tube so they don’t get in the way when you shoulder the bike, and they’re fitted with outers along their entire length to avoid dirt and water contamination. Whyte include plenty of little touches that should prove practical over time. As ever with their bikes, the slot at the top of the seat tube faces forwards rather than backwards to avoid spray sent up by the back wheel. They have also added bosses for attaching a Crud Catcher to the underside of the downtube and the handlebar tape is of the anti-slip variety. The fork is full carbon while the groupset is mostly from SRAM’s Apex range with a Rival rear mech. Whyte have gone to FSA for the chainset – it’s a Gossamer Pro Cross with 36/46 chainrings while back-up braking is available from top-mounted Tektro levers. The wheels comprise Whyte’s own double-sealed hubs laced to Alex CXD-26 cross rims with DT spokes. They’re claiming an all-up weight of 22lb (10kg). We’ve not ridden the Saxon Cross, we just checked it out at Whyte’s launch yesterday, but it looks like a really solid bike for the money. The other two cross bikes from Whyte are designed more with commuting in mind, much more in the mould of the do-it-all commuter bike and, both priced below £1,000, they’re available through Bike to Work schemes. You could take either off-road easily enough – they share most of the Saxon Cross’s features – but they’re not as trail-specific. Essentially, though, Whyte have designed the Charing Cross (£999) and the Kings Cross (£799) for longer commutes. They reckon that people will use the R7 bikes for commuting up to about seven miles each way, but beyond that people tend to want a more efficient riding position – less upright, more head down – along with the bombproof features that can be built into a cross bike. Both the Charing Cross and the Kings Cross again come with a 6061 hydroformed frame that’s custom-drawn and multi-butted but the geometry is slightly different to that of the Saxon Cross. The top tube is a little longer (1cm on the 57cm model, less on the smaller models) for a slightly more stretched ride position. Each comes with an eyeleted fork although the Charing Cross’s is carbon while the Kings Cross gets alloy. Each of these bikes comes with post-mounted mechanical disc brakes, top-mounted levers, fully enclosed cables, Crud Catcher mounts… most of the key features of the Saxon Cross. It’s just that the spec level is lower to hit the price points: the Charing Cross has a Shimano Tiagra-based spec while the Kings Cross is mostly Sora. 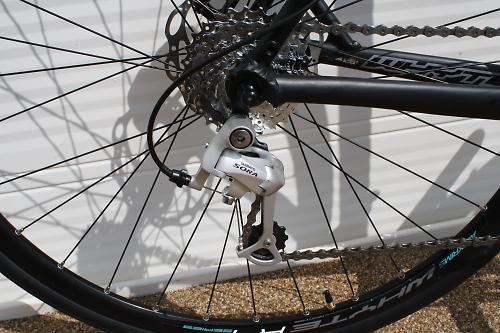 Being mainly aimed at riding on the road, the wheels aren’t quite as hardcore either – Alex Black Dragon 24 rims on no-name hubs – and the tyres are slick 28c Maxxis Detonators rather than the Saxon Cross’s knobbly 33c Maxxis Raze CXs. Whyte have done away with the quick releases too and locked the wheels on instead, which makes a lot of sense on bikes that are likely to be locked in public places. We can see all three of these bikes doing well. They all look cleverly thought out to us and we look forward to getting one of them in on test in the not too distant future. They should be available from about September so keep your eyes on the Whyte website. 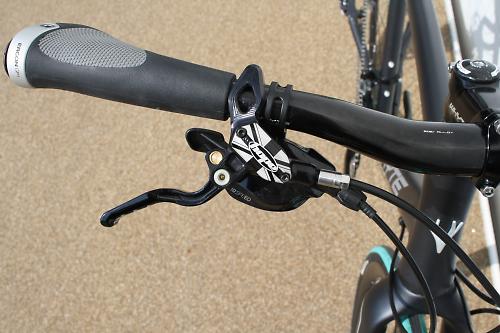 When Whyte launched the R7 bikes a year ago, they had three models priced below £1,000 and then the £3,000 Montpellier. In other words, three bikes that people were actually going to buy and one that… well, who is going to spend three grand on a flat-barred road bike? A lovely bike with Hope hubs and brakes, a SRAM XX/Red/Force groupset and all the rest of it but, really, three grand? It was always going to be at attention grabber rather than a serious contender. Anyway, Whyte have reined the Montpellier in for 2012. It uses the same 6061 hydroformed aluminium frame as last year – multi-butted with a press-fit bottom bracket and built to a mountain bike geometry. But Whyte have specced a more affordable component package and brought the price down to £1,599. Not cheap, admittedly, but a lot cheaper. The fork is full carbon and the groupset is mainly from SRAM. The Hope brakes (X-2 Race) and hubs (EVO) have made it through the reinvention and you’re looking at a weight of just over 18lb (8.2kg), which is only about 1.5lb heavier than last year’s super high end model.

The R7 range kicks off with the £699 Portobello. At that price you get a Shimano R440 9-speed group and Pro Max Hornet disc brakes.