After much anticipation Bespoked Bristol has finally landed we're just back from the press launch and all we can say is, if you like bikes and you can get down there it's well worth the trip. The Paintworks in Bristol is dripping with handbuilt loveliness and considering it may not be Earls Court in size but Bespoked makes up for that by packing in the quality, there's a hell of a lot to see – this first mighty gallery is by no means all that's on offer. We'll be visiting again to bring you the rest.

What's particularly exciting is that so much of what there is to see is British from established players like Brian Rourke and Enigma through to new kids on the block like Feather Cycles, Milk Bikes, and Donhou… and not to be ageist they really are new kids, if you see someone young manning a stand, chances are they're a framebuilder. 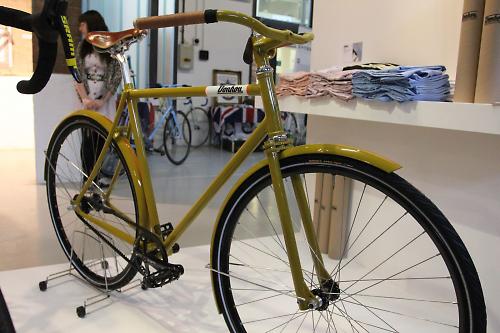 Donhou certainly made a splash with their bikes - the Pimento above winning the Best in Show prize. I say "their" Donhou would appear to be mainly Tom Donhou, ex-product designer and a man who decided he needed to make bikes while lying in a tent by the side of the road in northern China. Good decision cos the bikes are pretty special, more then one of the other framebuilders we spoke to had something admiring to say about them including the guys at Brian Rourke who know a thing about custom building. The incredible thing is, he's only been going for a year and his output to date is 14 bikes. 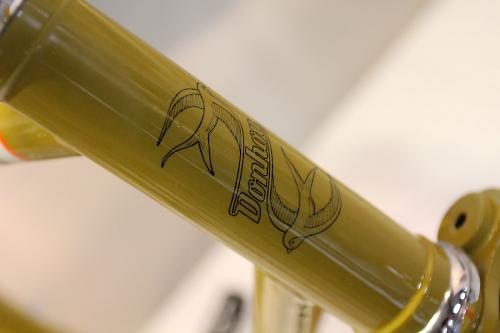 14 cool bikes in 12 months no wonder Tom told us he'd lived breathed ate and slept bikes for the last 12 months. We were particularly struck by his Pimento urban utility bike, built for a Swedish client living in London who not only wanted a sturdy, practical, and stylish round town machine, but also wanted it to be as thief proof as possible - so the seatpost has a cunning labyrinth locking arrangement – you can't just pull it out you need to know the right combination of pulls and turns. There's also a locking top cap on the handlebars - so no-one can pinch your handlebars. 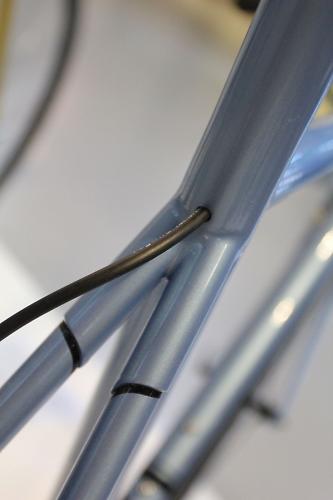 Drivetrain is a two speed kick down matched up to a Gates Belt Drive for clean trousers and low maintenance. The filet brazed blue road bike is also a looker, this was built as the 'forever bike' for the guy that writes the dailycycle.co.uk blog spot, there's nothing retro about this baby, interesting to see the integrated seat tube and the use of over-sized steel tubing - much like on the Tonic Vanishing Point that's in for testing. I also like the sleeved lugs where the seat stay meets the seat tube and there's a really nicely executed practical detail on the third bike on the Donhou stand where a piece of reinforcement where the seatstays meet the thin walled seat tube actually looks like decoration. 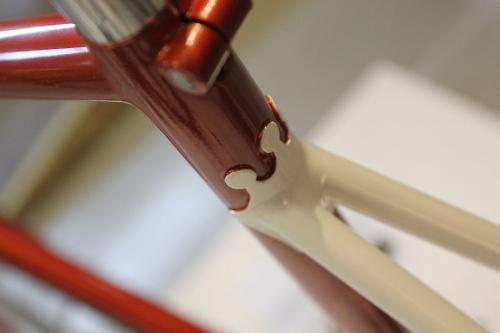 Being a full custom service Tom will build you whatever you want, but he is also more than happy to advice on getting the right configuration of tubing to get you the ride you want. He likes to spend time talking to his clients so he can really understand exactly what it is they want. You can find out more about Donhou Bicycles at www.donhoubicycles.com. 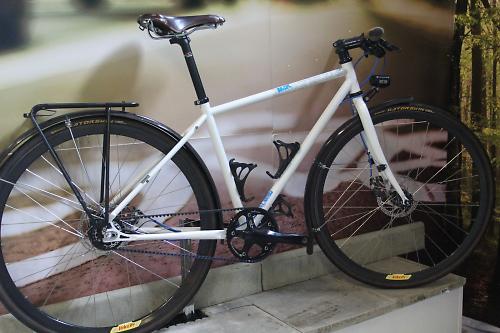 Milk Bikes are showing off their first production bike, the RDA an low maintenance commuter bike built from TiG welded 4130 Chromoly the frames and forks are designed over here and built in Taiwan. The version at the show has an Alfine 11 speed hub mated to a Gates Belt drive – not just any Gates belt either this bike has the new Centre Track version of the belt this isn't in production yet but soon will be. The Centre Track isn't about making the belt more efficient – set up properly the belt drive is already about as efficient as it can get without being a well set up chain – however up until now they have been pretty fiddly to get set up just right. The centre track aims to fix that by splitting the teeth on the belt in two – to form a centre track and combining that with a fin on the chainring which between them help keep the belt perfectly aligned and tensioned too. Simple but clever… but back to the bikes.

Mark Meadows the man behind Milk is a big fan of the Gates Belt, particularly the Centre Track, and he reckons it is the ideal solution for a low maintenance commuter machine – it doesn't need oiling is easy to clean when you need to and of course it won't get your trousers dirty. His commuter bike is available in a number of different builds you can have an 8-spd Alfine hub if you wish, you can even have a chain. 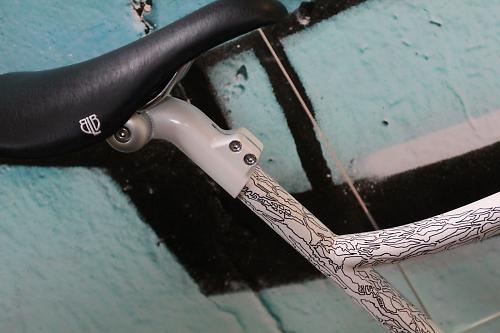 Milk also have a mountain bike on their stand and the Bullet fixie a real looker with an integrated seat post and classic track geometry. It's a project Mild are building in collaboration with Brick Lane Bikes– check out the patterning on the seat and top tube - a friend of Mark's did that with a Sharpie… it should be spreading as the show progresses.

Every bike is built custom to order. There are example specs on the website but you can talk to Mark about anything different you want. 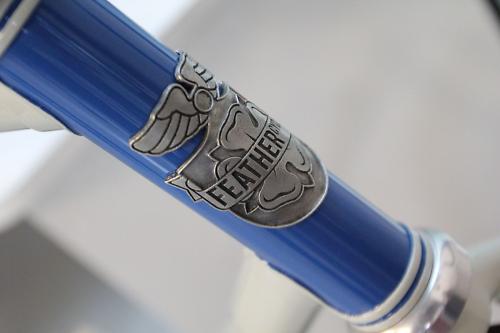 Ricky Feather started making bikes less than two years ago with an empty workshop in York… it didn't stay empty for long and looking round his stand you can see why, he really does make a gorgeous bike.

And he's a man who likes to turn his hand to different styles of machine, there's fixed, road modern and retro styled bike son his stand whatever you want Ricky will make it for you… so long as it's in steel that is, he can cut his own lugs and make them as fancy as you like, he's also more than happy to go the fillet braze route whatever you want.

Ricky's raced BMX for 15 years, he did a welding apprenticeship, and working with metal engineering but "i got sick to death of it, doing the same thing every day" so with the help of his wife he found himself a workshop and hasn't looked back since. As impressive as the bikes is the fact that Ricky is pretty much self taught "It's basically all homegrown I taught myself about it reading every book I can about frame building… I put my heart and soul in to every bike" he told us. We believe it.

All his frames and stems are hand mitred using half round files and you don't get much more hand built than that. 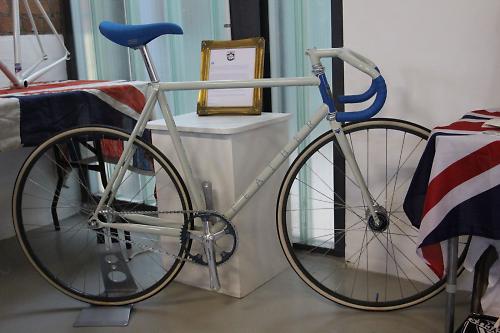 The first bikes he built were fixeds (and he won the prize for Best Track Frame at the show) but he never wanted to to be pigeon-holed and he's doing more and more road bikes these days including a very nice pale blue one - we particuarly like the colour co-ordinated Cinelli Ram handlbars that Ricky painted to match the rest of the bike.

Our favourite Feather? Number 36, Ricky numbers all his frames, 35 is his latest bike and he built it for himself as he told us "there's no better feeling riding a bike that you've put together yourself", the bike is built from an old set of Carlton lugs – he'd seen some on a friend's bike and been hunting for them for ages when 10 sets came up on on eBay. Check out the beautiful filet brazing on the front of the fork crown to make it match those lugs and check out too the dates stamped in to the frame - Ricky and Katie's wedding anniversary. A proper labour of love then. 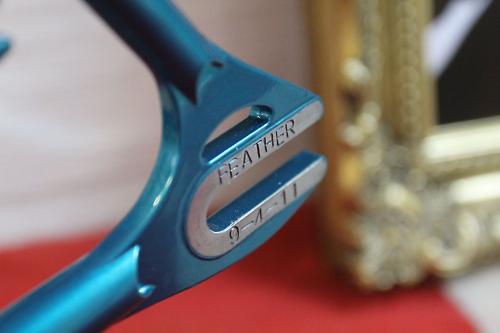 Base price for a Feather starts at £900 whether you want a lugged or filet brazed frame and then it's up to you how fancy you want to get. Ricky will advise on tubing and components and he's happy to build frame only or a complete bike he can source parts or you can give him the kit you want used. You can find out more about Feather Cyles at www.feathercycles.com. 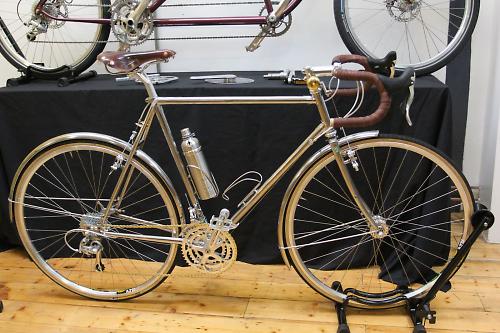 Paulus Quiros Design another new builder from Barcelona via Wales… his hand polished steel road bike is something of a showstopper. 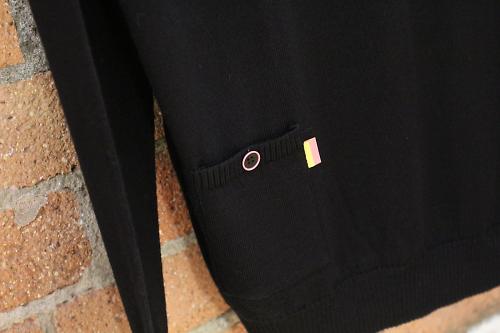 The Waterford and Gunnars on the Rock and Road stand… worth a look just for the paint jobs, but very much more than nice paint. Velobici Clothing – elegant well made seamless wool clothing for urban and performance cyclists, knitted in Leicestershire from top quality merino wool. Nice. Oh, and check out their arm warmers with built in elbow protection.

Shutt VR are sharing a stand with Velobici (there's 20 per cent off if you buy at the show too) we particularly liked their new black top with reflective zip and hem detailing.

We'll up date this in the morning with more on Tokyo Fixed, Burls, Brian Rourke, Donhou, Strada Wheels and more. For the moment though feast your eyes on all of them and more in our gallery. 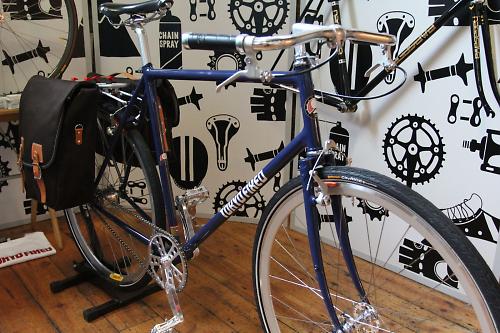