Heavenly looking bike from the US of A
by Tony Farrelly

We've had some very fine looking bikes come through the road.cc offices in the last few months but on looks the Merlin Cielo, hot from the box, would give most of them a run for their money. We'll find out what it rides like soon enough. For the moment though here's a gallery of pics and a bit of technical detail on Merlin's range-topper to whet your appetite.

Available as a frameset package of frame, Chris King headset and fork the Cielo (Italian for Heaven) can be yours for £3499, how much you decide to spend on the rest of the build is up to you, ours came with full SRAM Red and a set of Reynolds Assault wheels, FSA K-Force 'bars, FSA stem and carbon seatpost, plus a Selle Italia SLR saddle… so not much (if any) change from £6K there then.

Merlin did an earlier version of the Cielo a few years back, that bike featured a carbon down tube an lots of fancy detailling on the lug work and, if memory serves, something that looked like a titanium napkin ring in the middle of the top tube. I never rode one and in the event it proved to be such a hard bike to make that it only lasted a couple of seasons in Merlin's line-up. I've got to say I wasn't a fan of the “antique gun” look  of that earlier model, but enough people were for Merlin to consider making a new version… and this is it. Gone though is the fancy filligree in its place understated elegance.

In fact we've got the very first version of the new Cielo and later production versions feature one slight tweak to the frame (the cable guide under the bottom bracket has been moved a fraction) and one change to the spec – current versions of the Cielo frameset ship with Easton EC90 SL forks in place of the no longer in production Reynolds Ouzo Pro on our bike. Made from a combination of 3/2.5V titanium and Reynolds carbon the top tube and down tube carbon cross members are glued into the the lugs of the titanium tubes. The titanium lugs are grooved to accept the conical and tapered ends of the carbon tubes for a perfect fit. The whole of the rear triangle is titanium and the head and first portions of the top and tubes are titanium also – this section is essentially one big lug.

All the tubes on the Cielo are size-specific so the amount of manipulation and butting will differ between each size of frameset – Merlin also offer a custom option.

The back end of the bike has the same geometry as Merlin's all titanium Extralight model – next down in the range and we are promised a very stiff efficient ride, which is also extremely comfortable too, we can't wait to find out. 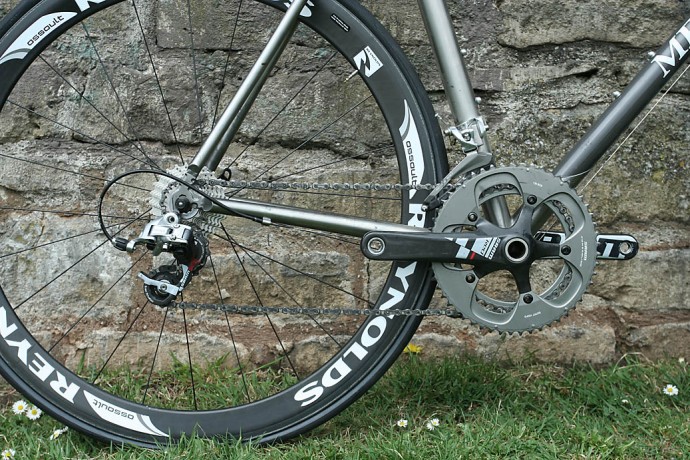 Both the seat and chainstays are heavily manipulated and butted, the seat-tube on our 55cm is also well butted too, no surprise then that our frameset built up with Sram Red and Reynolds Assault Carbon wheels weighs in at a feathery 7.3 Kg (16.18lb). Nice.