Towns hosting stage starts and finishes of the Giro d’Italia have every reason to feel proud about their participation in the race, and are guaranteed to put on a show, not least to justify the expense of bringing the race there in the first place. But during its 3,500km journey the Giro flashes past hundreds of other towns and villages, each with their own story to tell. Yesterday, quite by accident, we stumbled across one such town where we heard tales of Fausto Coppi, Gino Bartali and most unexpectedly, the Pope’s Colnago.

The town was Castel San Giovanni, close to Piacenza, and home to 14,000 people. The race book listed it among the places the stage passed through, 107km from the finish, without further comment, giving no hint of what we’d find.

Indeed, we hadn’t planned to stop there en route to Parma at all, but Marco, a friend from university days in Pavia who had picked me up at Alessandria station to act as road.cc’s driver for the day, suggested we stop there after we found the road to nearby Stradella had already been closed. “There’s nothing there,” he confessed. “But at least it’s convenient for watching the race go by.”

Like many other towns the Giro passes through, Castel San Giovanni had turned out in its Sunday best to greet the race. The local police were in their smartest uniforms, a small grandstand had been set up for local dignitaries, and families had already claimed the best vantage points in the narrow main street.

Flags hung from balconies, and many shops had their windows decked out in pink, or with a cycling related theme. One of those gave a hint that this small town had a special story to tell.

There, in a pharmacy window, was a Colnago from the 1970s. Moreover, it was clearly a very special example, even by the famed Italian framebuilder’s standards, painted black but finished off in what appeared to be gold plate – which indeed it was.

A card proclaimed that it belonged to Renato Ginofero and was identical to one that had been presented by Ernesto Colnago himself to Pope John Paul II.

We were so taken by the beauty of the Colnago that we scarcely noticed the other item in the window. A woollen maglia rosa which, below the familiar Gazzetta dello Sport masthead, bore just one word, but one that resonates among cycling fans everywhere: Molteni. Clearly, we had to find out more. 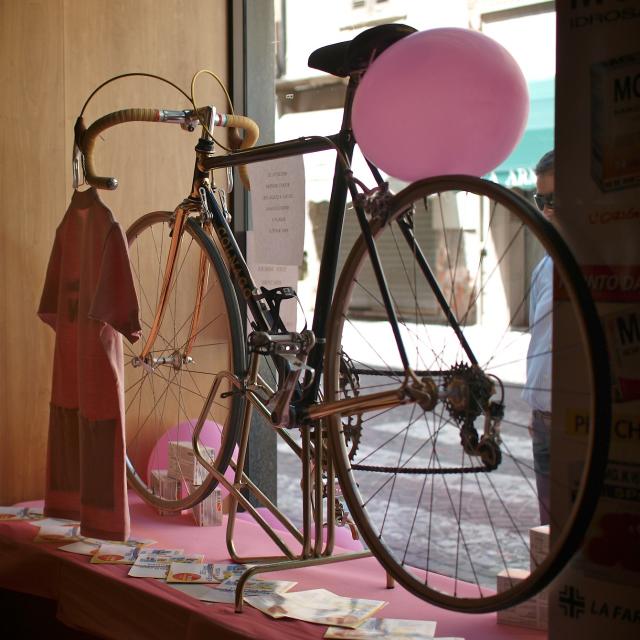 Further on, in the town’s main square where the temporary grandstand had been erected, with a table with a silver trophy on it taking pride of place, a pennant with the letters TV on it had been hung across the road; ‘traguardo volante,’ in Italian, or the more mundane intermediate sprint to the rest of us.

But the small pennant’s simplicity – not a sponsor’s logo in sight – and lack of mention of an intermediate sprint in the race book again gave a hint that something out of the ordinary was going on here.

We wondered if there was an amateur race going on, but no, this was all about the Giro, and one of the marshals pointed us in the direction of the man best placed to answer our questions.

That man was Alberto Ginofero, who together with the local council had organised the initiative in memory of his late father, Renato.

“My father was an amateur cyclist who later became a race organiser, including important ones such as stages of the Giro d’Italia,” explained Alberto. “He brought a stage finish to Piacenza for the first time, and he was a friend of all the great champions, such as Bartali, Coppi and Magni.” 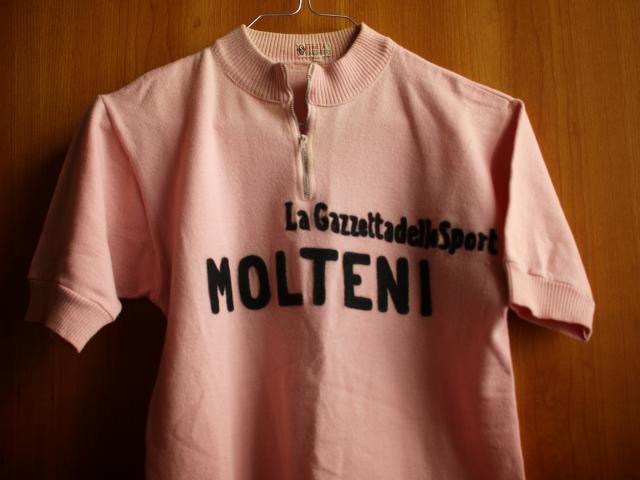 Indeed, Alberto himself got to know all of those cycling greats as a child when they would visit the family home, and yesterday Faustino Coppi, son of one of cycling’s all-time legends, had stopped by Castel San Giovanni earlier on to give his own best wishes for the day.

Alberto disclosed that he himself was a Bartaliano, while his father was in the Coppi camp, although he confesses that he cried when Coppi died. “He was a great champion and an unforgettable one,” he adds.

Renato Ginofero also organised one of Europe’s biggest amateur races of the time, the Giro di Medio Po, with winners including Gianni Bugno. The finish line of that race was precisely where yesterday’s traguardo volante was placed.

Alberto revealed that while the idea of presenting a trophy to a rider from the Giro for being the first across that line was an unofficial one, it had the blessing of race director Angelo Zomegnan and the riders themselves had been made aware of it.

As for the Colnago, he confirmed that his father’s was one of only two that were made, the other being the one given to the Pope, shown receiving it in a picture on the company’s website. Our gallery above shows some pictures of what is a very special bike.

Prior to the arrival of the Giro yesterday, the deputy mayor of Castel San Giovanni gave a speech in which he outlined not only the region’s strong ties to cycling, but also the race’s role in bringing the country together, especially in the difficult years following the end of World War II.

Indeed, for all of this year’s celebrations of Italy’s 150th birthday, there are perhaps only two things that truly unite the country: the Azzurri winning the world cup is one; the Giro d’Italia is the other.

All that was left was for the race to come through, the main bunch trailing lone escapee Sebastian Lang of Omega Pharma Lotto by some 17 minutes, the German cheered as he rode alone, as he would for more than 200km on the longest stage of this year’s race.

The former Gerolsteiner rider will be presented with the trophy before the stage start in Reggio Emilia this morning. Winning it will never be recorded in the journeyman pro’s palmares.

But on a day when Contador, Nibali, Cavendish and other stars rode through this small Emilian town without a second glance, he will always be remembered as the man who led the Giro d’Italia as it passed through and took home a trophy in memory of one of its favourite sons.