Vecchiojo dons the road.cc spy shorts to grab some pics of prototype 2012 'crosser
by VecchioJo

Popped in to Upgrade, home of Kinesis bikes the other day to reluctantly return some Reynolds wheels (test coming soon on road.cc) and whilst having a cup of tea and a Jammie Dodger or two we spotted out the corner of our eye a rough and ready disc-braked cyclo-cross bike prototype frame being tinkered with. Luckily I had the road.cc spy shorts on , with the camera in the chamois, hence the bulge.

This frame is the “production prototype” so it's pretty much ready to go with just some head-scratching over details to do and some making sure everything works and is in the right place, hence the selection of mechanical and hydraulic disc callipers around it on the desk, a scattering of mudguard parts and a comedy what-was-lying-around wheel with a 35c tyre on. 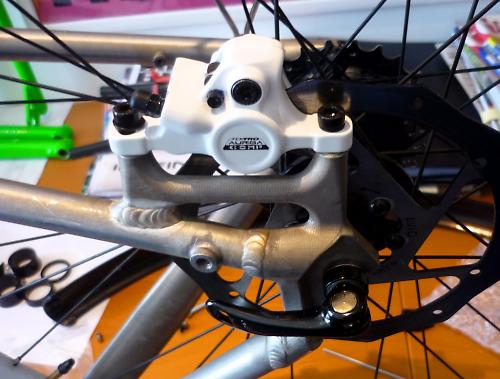 The working name for this new CX frame is the catchy “Crosslight Pro6”, but this may change to something more friendly and endearing for production. With the UCI allowing disc-brakes to be used in cyclo-cross competition now it's designed as a fast CX racer first and foremost, but with all the add-ons you’ll need to make it work if you want to load it up and use it during the week as a more general beast of transport and burden. Makes a nice change to have it that way round rather than an overblown overweight disced-up hybrid dressed up with drop-bars and trying to be cool like a 'cross bike. 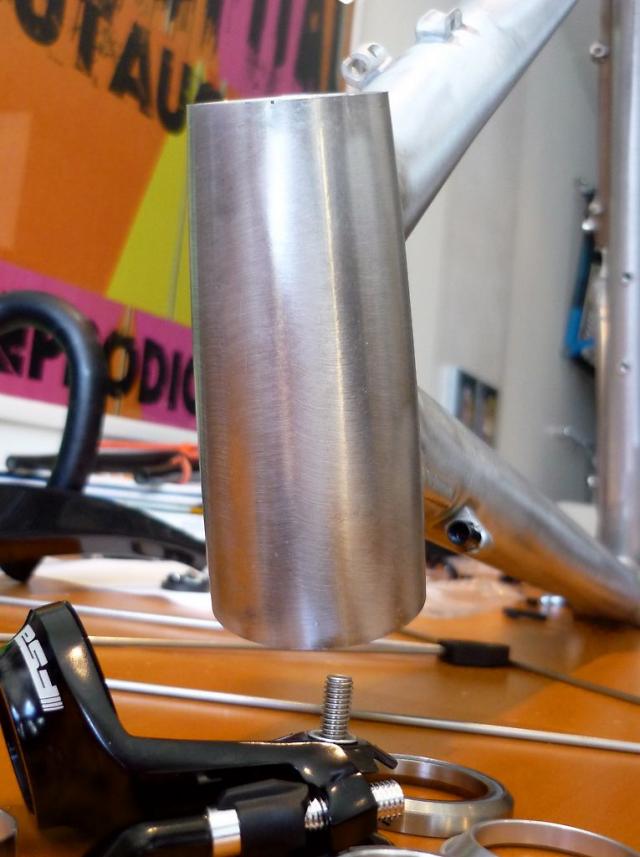 Bottle cage bosses take the frame out of the pure ‘cross arena and into the more useful field, cable and hose routing runs along the top of the elegantly shaped “Ergo2” top-tube where the underside is flattened for ease of run-up shouldering. The head-tube is bulbous and tapered, it certainly looks stoic and should stiffen up the the front end a bunch and the frame will come with a taper-steerer, carbon bladed, disc compatible fork with a post-mount. There’s plenty of clearance round the asymmetric “aStay” chainstays, even with a chunky tyre and a mudguard. A mudguard/rack boss sits on the seat-stay away from the dropout to help commuting essentials from fouling the disc calliper, and the frame will come with a special stainless steel widget and bolt, allowing you to mount the 'guard stays on the rear post mount for added clearance if you are using a mechanical disc brake with all it’s sticky-outy levery parts. 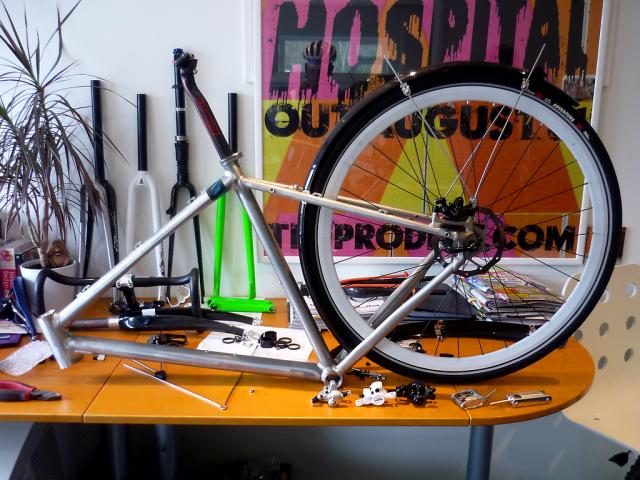 The frame is made from "Kinesium" which is Kinesis’ own metal, they call it an "Enhanced Alloy", claiming it is 25% tougher than standard 7005 series aluminium with a far greater fatigue life. A 54cm frame allegedly weighs just over 1500g and the frame + fork will come in 3 colours with fresh new graphics ready for the 2011/12 CX season, so hopefully about August. Kinesis Crosslight frames have been a successful and popular part of the UK cyclocross scene since forever it seems, with an excellent quality:features:value ratio and this new frame looks like it could continue that tradition both on the race-course and on the tow-path. And as Upgrade are also the TRP importers we expect to see one of these frames with a TRP’s Parabox Hydraulic Disc Brake System linked to a hydraulic disc braked 'cross bike sometime soon. 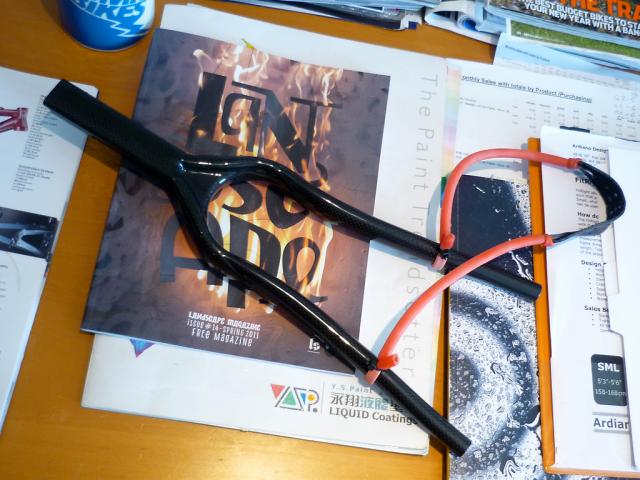 We also saw a catapult made from a carbon seat-stay assembly, (had to go telephoto with the shorts for that one – don't think anyone noticed) not sure if that’s going to make it past prototype stage and onto the shelves though.