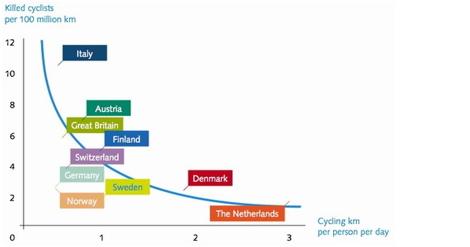 "I want to ride my bicycle" - Netherlands is safest cycling nation

Motorists and cyclists live in harmony in Holland
by Rebecca McIlhone

It may seem obvious but if we really want to improve life for UK cyclists it seems we should take our lead from the Netherlands.

The Dutch and Danish regularly battle it out for best cycling country but new research (from the Dutch) shows Holland has the safest roads for cyclists.

The research gets really interesting when you look at the perceived reasons for safer cycling with reference to the relationship between cyclists and motorists in the famously flat and cycle-friendly nation.

Recent stories, including a Guardian blog yesterday, would suggest confrontation between motorists and cyclists is a growing problem in the UK and abroad. The blog in question centred on an incident in the US where a cyclist’s ear was bitten off by an angry motorist after the former advised the latter to slow down.

The blog ended with a rather obvious invitation for motorists to vent their spleen in the comment section, “Have you ever got so mad with a cyclist that you wanted to bite their ear off?”, to which they duly responded with generous quantities of bile.

Meanwhile we reported yesterday that when a local paper ran a story about a left hand filter lane being converted into a cycle lane the story attracted 111 online comments within the space of 30 minutes. Many of these also simply batted abuse back and forth between the cycling and motoring fraternities.

In Holland, however, the key to cycling/motorist harmony lies in the fact that 60 per cent of the Dutch cycle at least three times a week and 80 per cent at least once a week meaning most motorists are cyclists too. Each person in the Netherlands owns an average of 1.1 bikes to England’s 0.4. Dutch cyclists are also happy cyclists, according to the graph below, also contained within the report.

“Higher bicycle use leads to modified conduct on the part of all traffic participants,” the report continues, “because cyclists are more dominant in the overall road picture and because more traffic participants have cycling experience. Higher bicycle use often goes together with lower car use, thus reducing the chance of conflict with car traffic.

“Almost every car driver is also a bicyclist, which implies that car drivers know how cyclists behave.”

Tineke Huizinga, State Secretary of Transport, says the Queen song "Bicycle ride" could be the Dutch national anthem: "The bicycle oils the wheels of the municipal traffic system. Cycling means arriving at work, school or the gym in a more alert frame of mind, feeling creative and positive," she says.

The report states the annual number of road accident victims has halved since 1980, both in terms of cyclists and those in cars, a triumph considering the enormous rise in car and bicycle use over the same period.

The report confirms the belief held by the CTC and other cycling organizations in the UK that: “The higher the bicycle use, the safer it is for cyclists.”

It says: “There are a number of explanations for this…Firstly, higher bicycle use leads to modified conduct on the part of all traffic participants, because cyclists are more dominant in the overall road picture and because more traffic participants have cycling experience.

"Secondly, higher bicycle use often goes together with lower car use, thus reducing the chance of conflict with car traffic. Thirdly, almost every car driver is also a bicyclist (60% of the Dutch cycle at least three times a week, 80% at least once a week), which implies that car drivers know how cyclists behave. Finally the policy explanation: high bicycle use creates more support for bicycle policy, so that more is invested in a safer cycling infrastructure.”

Unfortunately with increased bike use comes increased bike theft. With a fleet of 18 million bicycles in the Netherlands the some 750,000 bicycles are stolen every year.