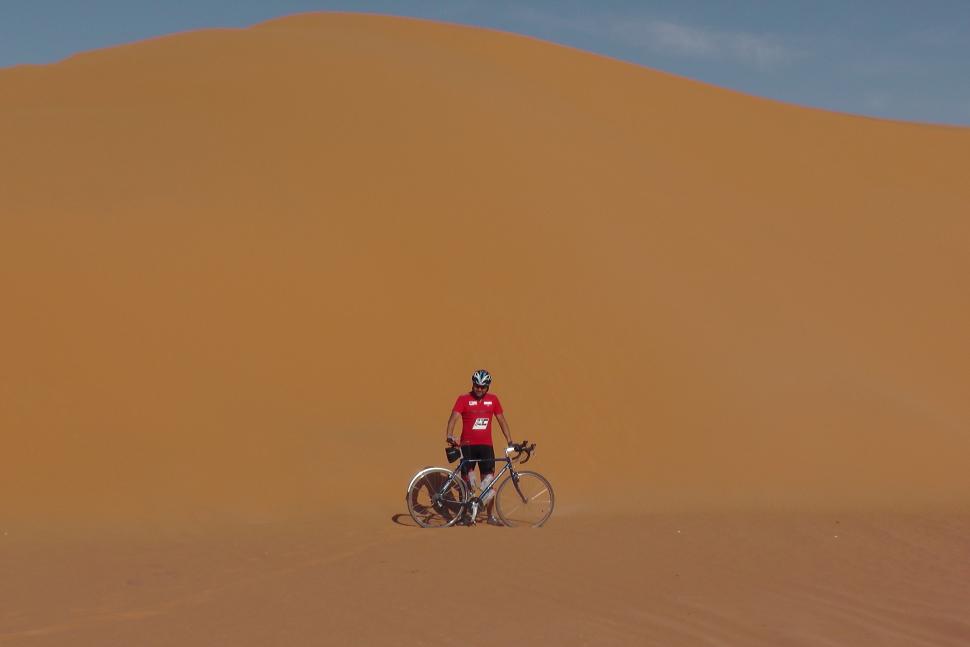 Reza Pakravan with his Ridgeback Panorama.jpg

A London cyclist is hoping to get into the Guinness Book of World Records after last week completing what he believes to be the quickest ever crossing of the Sahara desert by bike. Reza Pakravan, a market security analyst, undertook his journey on a Ridgeback Panorama touring bike.

The 36-year-old set out on his 1,200-mile journey on March 2 in Algeria, arriving in Sudan on 17 March after combating sandstorms and extreme temperatures and having to subsist on survival rations. He was even accused of terrorism by border officials.

“It is an amazing feeling to have cycled across the biggest desert in the world,” he said. “I celebrated by going to get a shower as I smelt disgusting and then went to get a good night sleep without having to worry.”

The trip took six months to plan, including validating the route with Guinness World Record officials, and at times Pakravan didn’t think he’d ever get the journey under way.

“Unfortunately these days Sahara desert has become one of the most dangerous places in the world,” he explained. “On the west of Sahara, border areas between Mali, Niger and Algeria is becoming one of the most hostile areas in the world. Then there has been the current situation in Libya,” he continued.

After sorting out his visas and validating his route for Guinness World Records purposes, there were still other hurdles to be overcome.

“I had my fair share of problems before I’d even started cycling,” he said. “First I had problems in Algiers Airport because they thought my CO2 cartridge could be used to detonate a bomb! I spent two hours explaining and finally managed to save them from being taken away from me. Then just before the start I had problem with my GPS and the bike computer and then two flat tyres in one day!”

Covering more than 100 miles on some days through remote villages and open desert, Pakravan encountered extremes of temperature as his journey progressed.

“In north of the Sahara it was very cold, even during the day. As I progressed towards the south it got warmer and warmer. In Sudan it was really hot and I had to cycle in desert tracks and sand which was really tough.”

Despite his preparation and training, the intensity of the first sandstorm he experienced took the cyclist by surprise.

“It was tough. I was pedalling into wall of air and sand coming towards me. I spent five hours on the bike and made 10 miles progress! My camera got destroyed, sand left mark on my glasses and on me! I had never seen anything like that. I tried really hard not to stop but couldnít - nature forced me to stop!”

On top of the 6,000 calories a day that he had to take on board, Pakravan also had to drink 7 litres of water to keep hydrated.

“I had a local guide with a support car carrying water and equipment as it is prohibited for tourists to travel without a local guide in Algeria, and also it was impossible to carry enough water for the trip with me,” he revealed.

“I was mainly desert camping but would sometimes be invited to stay at Touareg tribesí homes or Nomadís tents in Algeria. In Sudan, I mainly relied on local hospitality as all the doors were open to me. At the end I stayed with a Korean family who are living in the Sahara. It was an amazing experience. My Ridgeback Panorama was fantastic for this trip. It was reliable and comfortable and survived a pretty arduous trip, which is testament to the bike,” he concluded.

The intrepid cyclist now has to wait several weeks to have his attempt verified by Guinness World Record officials before he can lay claim to officially being the fastest person to cross the Sahara by bike.