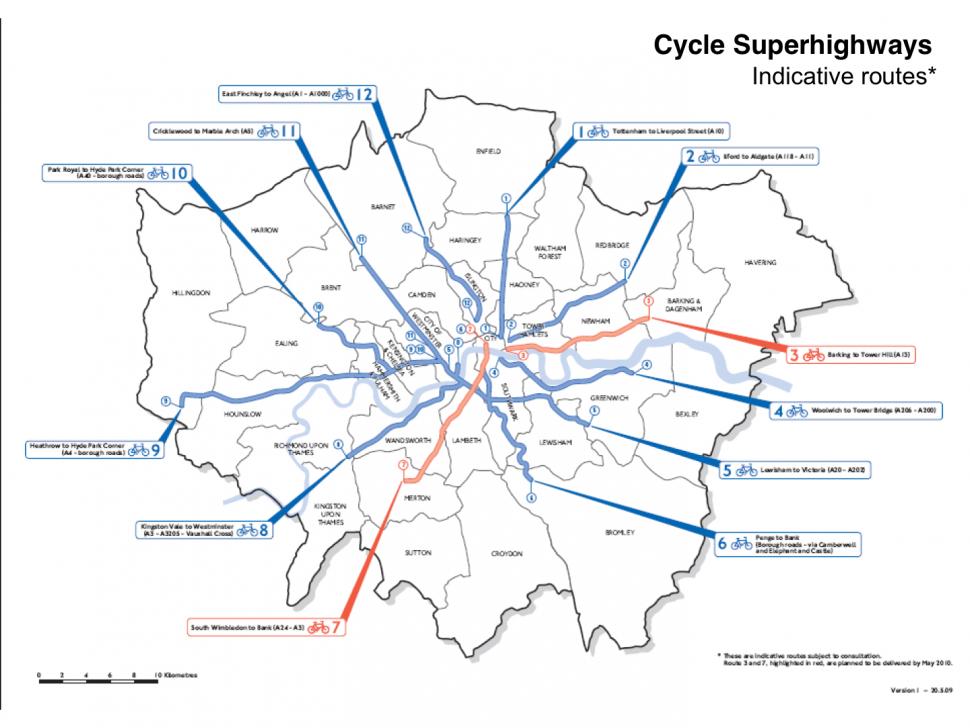 The London Assembly, the elected body that describes itself a “watchdog for Londoners” has called into question the safety and value for money offered by the capital’s cycle superhighways.

A report entitled Pedal power: the cycle hire scheme and cycle superhighways, gives a resounding thumbs-up to the Barclays Cycle Hire scheme, suggesting that it should be expanded, while calling for further evaluation of the cycle superhighways before any further investment is made in them.

The report is based on a survey of just under 1300 Londoners responding to an online questionnaire of whom 701 had actually used the pilot superhighways.

Of those 701, 60 per cent said they did not feel safer using the routes and two-thirds did not feel they were respected by other road users.

The report says: “Greater consistency in the measures along the route would help this situation, such as a uniform width, improvements to junctions and 20 mph speed limits on busy sections.”

Based on its findings, the report makes a number of recommendations about the superhighways:

The report concludes that: "There is clearly a need to learn lessons from the pilot routes before the roll-out of more cycle superhighways. There is a need to modify the approach to developing the future routes and to improve their features to ensure they are much safer and more attractive for new cyclists."

Responding to the report, a London Cycling Campaign spokesperson said: “Because of its environmental and health benefits, investment in cycling offers exceptional value for money.

"But to achieve TfL’s planned target of 160,000 more journeys as a result of the cycle hire scheme and superhighways the hire scheme needs to be expanded while the superhighways programme needs to focus on tackling road danger at gyratories and major junctions as well as reducing car speeds and volumes.”

A Transport for London spokesperson said: “We welcome the fact that the Assembly Transport Committee recognise the success of the Mayor’s flagship Barclays Cycle Hire scheme, we currently have more than 108,000 members who’ve already made more than 1.8 million journeys.

"Cycling numbers have also increased by 25 per cent along the pilot superhighway routes since they launched in July, with increases of over 90 per cent observed along some sections of route 7.”

Road.cc’s own TR McGowran uses the cycle superhighways on a daily basis and disputes the notion that riders would not feel any safer following the blue-painted routes.

“I believe that safety has been improved immensely by the superhighways, especially at junctions,” he said. “Riders are guided almost subconsciously to position themselves in the safest part of the road and cars now tend to leave a good gap on their nearside when they have to stop, so there is nearly always a passage for riders to get past.

“When friends cycle to my place in Balham they are always amazed by how easy it is to use the superhighway, and I feel the blue-painted lanes are, in themselves, a great advert for cycling.”

What about you? Are you a cycle superhighway user? Does the report tally with your experience? Let us know with a comment below.