Fresh in the office from this morning is this neat little GPS unit, the Rider 50 from Bryton. Not heard of them? Neither had we until very recently, but they've sent us one of their computers for a go so we thought we'd introduce you.

Bryton are a Taiwanese company and the Rider 50 is their first product, although there are more in development including a Rider 30 unit that'll be going up against the Garmin Edge 500. The Rider 50 is a handheld/bike mounted GPS unit that's pretty much a direct competitor to the Garmin Edge 705. It's a similar beast, built around a colour TFT screen with a backlight, and there's a good smattering of waterproof buttons, two on each side and two on the front either side of a joystick-style selector. The RRP, at £179, is about £100 than the Garmin unit, although with the new Garmin Edge 800 hitting the stores now you can pick up a 705 at a fair discount right now. Other similar features to the 705 include weight (108g) and battery life (claimed 15hrs). When you're out and about there's three main screens to keep your attention. The first is a map screen, and out unit came bundled with UK mapping that's based on the OpenStreetMap project. In our experience this mapping is pretty much spot on when it comes to roads but not always on the money where bridleways and paths are concerned; OS mapping is better for your rights of way. However, the GPS is quick to acquire a signal and the mapping is nice and clear on the TFT screen, especially when it's backlit; you can adjust the backlight time in the settings and knocking the joystick turns it back on. 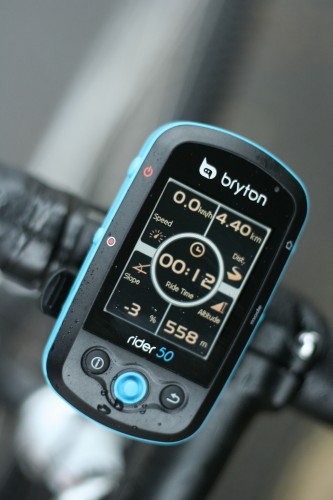 The next screen is a data display with five segments that you can customise to display whatever metrics you like to look at. It comes set up with a compass in the circular central section but we ditched that for a slope indicator to make us feel better about struggling on the climbs. There's a massive array of data to choose from, and because the Rider 50 is ANT+ equipped you can add an HRM strap and cadence sensor too. Bryton do a HRM/cadence bundle for £249 with mapping included.

The other option is a training screen where you can choose to race either against MyBuddy, a virtual partner, or yourself based on lap data from another ride. There's a step counter too for use when you're walking or running. You can share any stored information wirelessly with another Rider 50 unit by using the Knock Knock function. 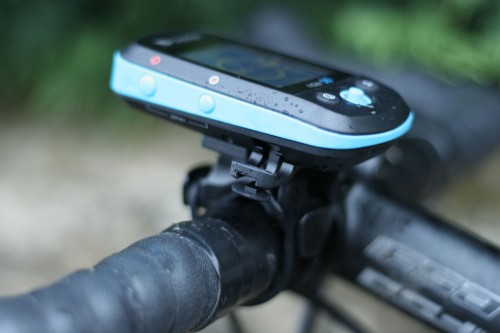 If you want to follow a route it's possible to upload routes, including turn-by-turn instructions, via the Bryton Bridge application that comes bundled with the unit. We haven't given that a proper go yet but we'll report back when we do. One thing to note is while the Rider 50 claims it's Mac compatible it isn't in any meaningful sense, as the bridge software on our unit is PC only.

We'll be putting the Rider 50 through its paces in the coming weeks and report back with our conculsions. For more info on Bryton, go to http://corp.brytonsport.com