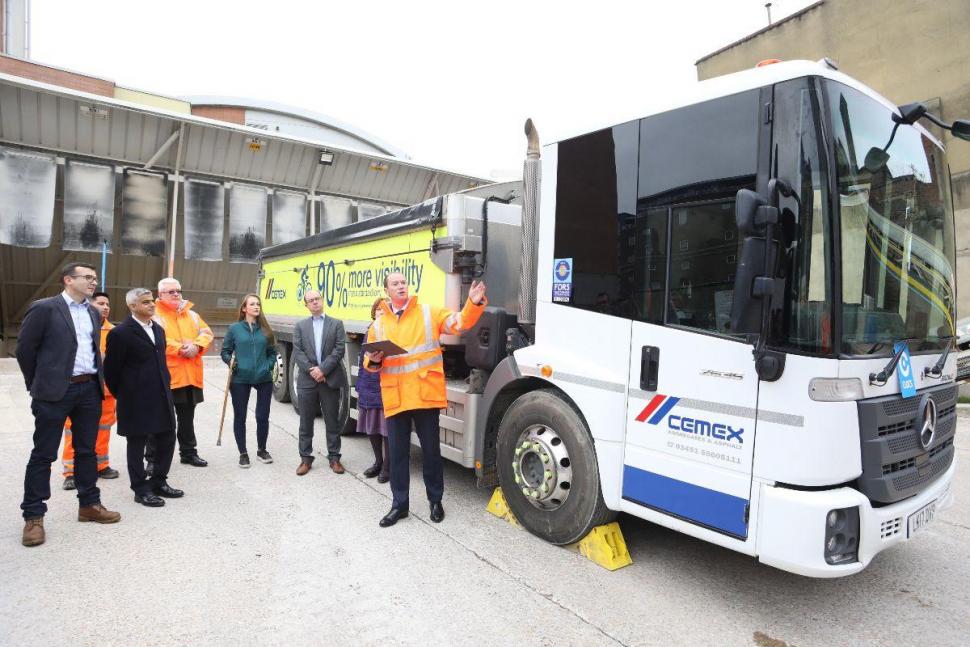 Businesses operating HGVs in London have been given a year to make their lorries safer for the capital’s cyclists – or face being fined for vehicles found to be non-compliant with the new standards.

The requirements, introduced by Mayor Sadiq Khan alongside Transport for London (TfL) and London Councils, which represents the cities local authorities, mean vehicles  of 12 tonnes and over will have to adhere to a Direct Vision Standard to help minimise drivers’ blind spots.

Operators that fail to comply, or do nott introduce other safety features, will be subject to a fine of £550 under the new requirements, described as a world first.

Despite accounting for just 4 per cent of London’s traffic on an annual mileage basis, lorries are involved in a disproportionate number of collisions involving vulnerable road users – between 2015 and 2017, they accounted for 63 per cent of cyclist fatalities, and 25 per cent of fatal incidents in which a pedestrian was the victim.

Eliminating the most dangerous lorries from the capital’s streets is therefore a key part of Khan’s Vision Zero strategy of eliminating all road deaths by 2041, and this week operators can apply for free HGV Safety Permits ahead of the enforcement starting on 26 October 2020.

The new standards will apply to vehicles of 12 tonnes or more and be implemented across Greater London on a 24/7 basis.

The Direct Vision Standard will rate vehicles on a scale of zero (lowest) to 5 (highest) stars depending on how much the driver can see from the cab.

When it comes into force, zero-rated vehicles will be banned from London’s streets, unless equipped with ‘Safe System’ features such as being equipped with CCTV monitoring, audible alerts when they turn left and cyclist detection sensors to enable HGV Safety Permits to be issued.

The requirements will become increasingly tighter between 2020 and 2024, when only vehicles with a three-star or above rating will be allowed in the capital.

Launching the initiative today at CEMEX’s Stepney Concrete Plant, Khan said: “I’m proud of our world-leading plans to remove the most dangerous lorries from London’s streets. So many of the tragic deaths on our roads involve HGVs and this new scheme will help save lives.

“Forward-looking businesses have already been choosing safer vehicles in the run up to HGV safety permits becoming available. Today the scheme has gone live and operators now have 12 months to upgrade their fleets, helping make our streets much safer for people walking and cycling.”

CEMEX says that all of its vehicles in London will comply with or exceed the minimum Direct Vision Standards in force until 2024 and David Hart, the company’s supply chain director for the UK said:  “We were honoured to welcome Sadiq Khan and the TfL team to our Stepney site today, as the Direct Vision Standard is launched.

“DVS is a landmark scheme that will ensure that all road users and pedestrians are safe as they come across HGVs while moving around the city. We fully support the programme; safety is CEMEX’s number one priority and informs all aspects of our operation.

“We are committed to investing in, and developing, our fleet so that it continues to reflect the latest advancements in safety features.”

The initiative has been welcomed by road safety campaigners. Victoria Lebrec, campaign co-ordinator at national road crash victims’ charity RoadPeace, said: “I lost my leg in a crash with a lorry in 2014 because the driver didn’t see me.

“Since then there have been many people killed and even more seriously injured because the lorries currently driving on London roads are not fit for purpose.

“It is madness to have huge, heavy vehicles with poor visibility on roads that are filled with people,” she continued.

“Transport for London should be commended for their Safety Permit scheme. I look forward to October 2020 when the most dangerous vehicles will be off the roads – and in the meantime encourage operators to consider thinking ahead, and making their vehicles five stars.”