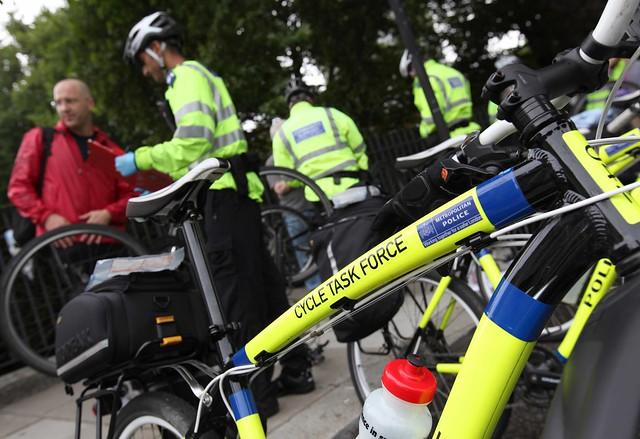 Campaigners urge police: Enforce law against road users who do most harm, not cyclists
by Simon_MacMichael

Cycling campaigners have urged the Metropolitan Police’s Cycle Safety Team to work with councils to identify why some cyclists break the law and find a solution to safety issues that lead them to do so, and to target those road users who have greater capacity to harm others.

Their comments come after the Cycle Safety Team - previously known as the Cycle Task Force - said in a reply on Twitter yesterday that around half of the enforcements they make against road users for breaking traffic laws relate to cyclists.

PC Christian and PC Darren have been dealing with cyclists going the wrong way down Beeston Place SW1 this morning. Please stay safe and abide by the traffic signs. pic.twitter.com/tOUN0B95sw

As we reported yesterday on the live blog, two officers from the Cycle Safety Team targeted cyclists riding the wrong way along Beeston Lane, a one-way street that runs north to south from close to The Royal Mews at Buckingham Palace to Grosvenor Gardens. As Twitter user and cycling campaigner David Arditti pointed out, the road cuts across the intimidating Victoria gyratory system, where cyclist Claire Hitier-Abadie was killed in a collision involving a lorry in 2015 (Arditti’s tweet mentioned Dr Katherine Gilkes, who died in a similar incident in 2013, although as he pointed out, “They are both examples of crashes that can’t happen when cyclists use one-way streets contraflow.”

Met Police Cycle Safety Team actively reducing the safety of cyclists here. The cyclists using Beeston Place the ‘wrong' way are obviously doing it to avoid cycling round the whole of the lethal Victoria one-way system. Dr Katherine Giles was killed by a lorry here in 2013. https://t.co/iz3ewEcSw5

Indeed, some cyclists ride the wrong way up Beeston Lane precisely to avoid the danger posed by motor traffic that typically includes a high volume of coaches, buses and, given the extensive redevelopment going on in the area, construction vehicles.

Another Twitter user who campaigns for cycle safety, Jono Kenyon, pointed out parallels with a similar operation previously undertaken at Holborn, another gyratory system in the capital in an area that has seen a number of cyclist fatalities in recent years.

Much like Alan Neive killed on Holborn gyratory after @metpoliceuk had an operation ticketing cycles using the bus lane. Now cyclists can do so. This isn't #visionzero @MetCycleCops

Sam Jones, senior campaign officer at Cycling UK, told road.cc: “Cycling UK does not endorse illegal or dangerous cycling and encourages all road users to respect one another and act within the boundaries of the law.

“It is concerning to see the Met Cycle Cops’ say that half our enforcement is on cyclists – as this suggests they’re focusing on a particular road user, whose capacity to harm others is pretty small compared to motor traffic.

“Cycling UK would encourage the Met to put more emphasis on policing the greater causes of danger on our roads, not go for the low hanging fruit.

“They should also investigate the causes of the offending by any road user and see what work they can do with the council to ensure road conditions are improved.”

Similar views were expressed by Simon Munk, infrastructure campaigner at LCC. He told us: “All road users should obey the law, including those cycling.

“But enforcement on Beeston Lane hardly seems proportional to the dangers there, with no recorded collisions in over 10 years involving cycling.

“It’s also concerning that half of the police’s Cycle Safety Team enforcement work is now on those cycling – again, this appears to be disproportionate given those cycling cause very little road danger.

“If we want to rapidly reduce road danger, this isn’t the way to do it. What the Met should be doing is asking Westminster Council to put in a cycle contra-flow at this location, which is clearly needed to help those cycling avoid the lethal Victoria gyratory, site of a fatal collision in which a  a cyclist died in 2015.”