Here’s an event that looks a lot of fun, and it’s for charidee! 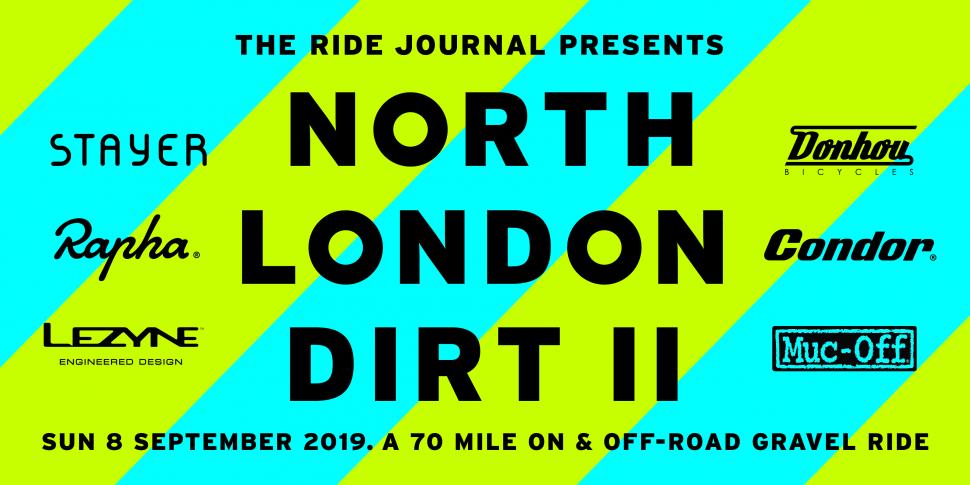 Back for a second year, the North London Dirt II is a 70-mile gravel ride that heads out of London, starting Rapha Spitalfields CC and returning to London N16 via a mix of quiet roads, urban cut-throughs, gravel tracks and fun singletrack.

The event is open to about 100 riders with all profits going to a local charity, the St Mary's Centre in Stoke Newington. You can get your entry in at www.eventbrite.co.uk/o/the-ride-journal-17443784689 and it costs £22.

It’s a brand new route this year and takes in “many back roads, dirt tracks and gravel paths as we’ve been able to fit in” say the organisers. They say anything over a 32mm cyclocross tyre is fit for the task so best leave your skinny slicks at home. 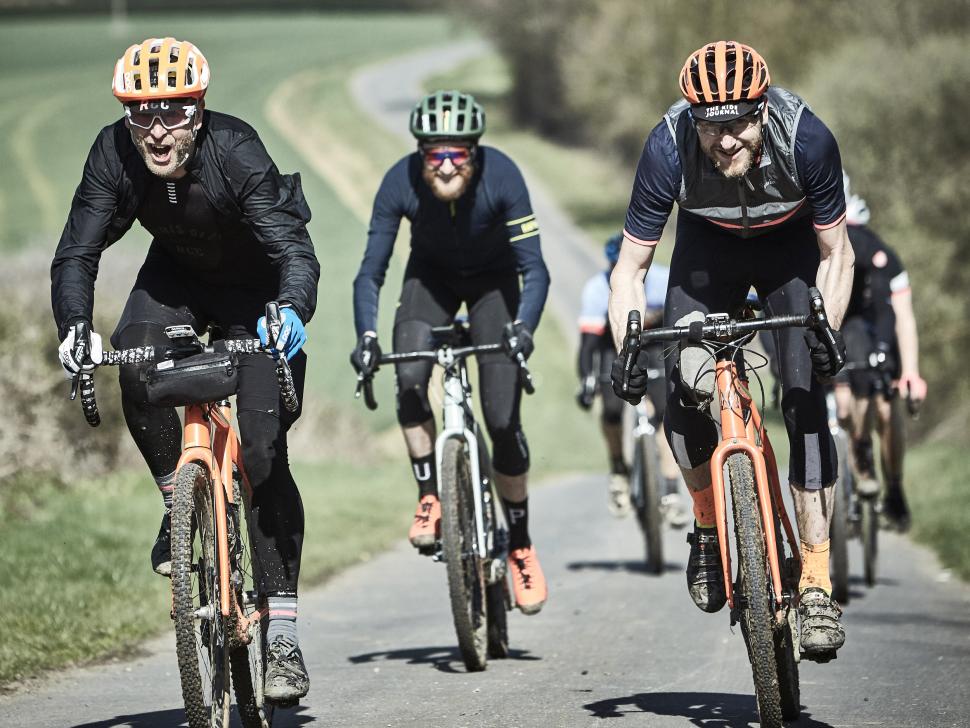 The organisers also add that it’s no sportive, there won’t be arrows at every junction, so you’ll need a degree of navigational ability (or download the route to your cycling computer) and be self-supported with enough food and spares to get you round.

Randy cyclist has to be cut free after having sex with his bike and getting todger trapped in the gears https://t.co/Ltp10dexJK

Probably not as much as this guy (apologies for the S*n link).

We've increased the funding & expanded it to include walking. Find out how to apply here: https://t.co/bQdzNnR9zg pic.twitter.com/xpCfwICNy5

Funded by TfL's community grants scheme, with a total of £500,000 in grants made available, Time Talents are running a befriending program that offers older people bike rides around London with willing riders. London's Cycling and Walking Commissioner Will Norman had a go at taking two willing participants for a spin yesterday.

Alan (87) and Bill (96) have been enjoying cycling with @Time_Talents befriending programme, funded by @tfl's community grants. Yesterday, they braved the rain and (even more bravely) let me cycle them around Southwark, while telling me how the area has changed. pic.twitter.com/drybStDyTI

Video has emerged of two New York Police Department officers ticketing a 45-year-old cyclist for not wearing a helmet – even though it is not illegal to ride a bike there without one.

Adults pulled over for not wearing helmets. What’s most impressive about this video (not where they parked) but that they quote the law with such authority, even #2 pulling out his phone and offering a legal opinion with a little swagger, all the time being dead ass wrong. pic.twitter.com/lHVJ4DytXo

In the incident, which happened on Saturday morning in Brooklyn when Ricky Bernstein, his wife and two other cyclists were pulled over for riding through a red light, an officer told him: “In New York City, you should not be riding without a helmet.”

Bernstein said that the four were kept waiting for 45 minutes while officers tried to determine if they had broken any other offences other than riding through the red light.

He told the pair: “A helmet’s not a law either,” to which one of the officers responded sceptically, “It’s not? OK.”

“No, it’s not,” Bernstein continued. “I’m 100 per cent positive.” He was correct; in New York, only cyclists aged 14 years and below have to wear a helmet.

The NYPD subsequently said in a statement: “The summons issued to the male for not wearing a helmet was issued in error and has been voided.”

The court summons issued for running the red light still stands, however.

31 July 2019, 11:20
If you thought Fiona Kolbinger's Transcon lead was impressive, wait till you see the Strava evidence Kolbinger is riding for around 17 hours a day so far at a hugely impressive average speed, clocking up her biggest day yet yesterday covering 475km. If she keeps this up, there can only be one winner.

Link to her Strava profile is here if you want to feel very inspired/completely jealous.

Jonathan Rankin has scratched from #TCRNo7. Jonathan Rankin scratched earlier this morning in Steinfeld, Austria at 10:26 31-07-2019. He completed approximately 1900km over 4+ days. Jonathan has been suffering from foot problems. He commented last night on instagram that his 'feet feel like they're about to drop off'. In his final message of the race to race director Anna Haslock he said, "I’m scratching. Feet have started to ‘disintegrate’ for lack of a better description! It’s been a pleasure." #TCRNo7Riders #TCRNo7cap15

Rankin cited horrendous foot pains for his reason for dropping out, but saying it had been "a pleasure" despite being forced to 'scratch' from the race.

For years we've waited, knowing it is possible. Finally and with a vengeance, Fiona Kolbinger has arrived @transconrace. I'm rooting for her. Rockstar. What a time for our sport. pic.twitter.com/VSVEJv1QS0

It means that Fiona Kolbinger is now leading the race overall, having just crossed the border between Italy and Switzerland - the tweet of support above is from James Hayden, who won the 2017 and 2018 editions. Ben Davies is in second, and quite far behind Davis in third is Sam Thomas. Could we get a first female overall winner of the annual epic in its seventh edition? The tracker can be found here.

Unfamiliar with the Transcon? Check out our handy guide.

Story from the Champs • @mhaller91 and I did a lap on a tandem. No one except @benedict13 and his camera noticed.

8 weeks until the world championships in Yorkshire and this is the current state of the bridge half way up Grinton Moor pic.twitter.com/zQfWujAGeC

Intense flash flooding in Yorkshire has caused vehicles to be swept away and roads to collapse, and with the Road World Championships coming to Yorkshire in September this is what a part of the course now looks like. The road up Grinton Moor between Wensleydale and Swaledale is completely impassable after a bridge collapsed, with over 3 inches of rain falling in less than 24 hours and hailstones 'the size of pickled onions' were reported.

The Ard Rock enduro mountain bike festival, due to take place this weekend, has already been cancelled because of the flooding, with the organisers saying on their Facebook page that they are "doing everything in our power to ensure our team on the ground is safe, and we can support all those who need help."

Forget guns, sirens and all that lark - this officer simply pedals up alongside a pickpocket nonchalantly and cuffs him without barely saying a word. Now that's efficient policing!

31 July 2019, 07:15
"It's over, I give up": Thibaut Pinot consoled by Groupama FDJ's Directeur Sportif in French documentary

Pinot's Tour de France of course ended in tears after he was forced to abandon on stage 17 due to injury, that has since been diagnosed as a torn quadricep. In this French documentary that aired on Sunday night in France, Marc Madiot is trying to console his distraught rider following his abandon. Pinot says "Every time it's the same, every time", and "It's over, I give up", with Madiot protesting that Pinot did everything right and it wasn't to be: "Carry on doing everything well and one day or another a door will open.

"A guy like you doesn't give up. Ever since you've been a rider, you've never given up until now. You've overcome everything.

"We're going to get you there. We're not going to leave you. The team is behind you."

At the end of the clip Pinot is sobbing uncontrollably, and simply says: "I'm fed up."