Live blog: Boss defends NYPD officer who knocked cyclist off then told him it was “for your safety”; Yellow jersey confusion for Giulio Ciccone + more 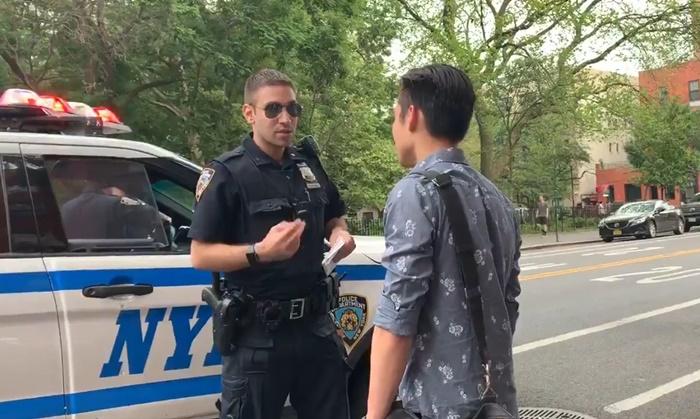 What a sprint ! We definitely have to take a close look back at this last kilometre !

Long day for the two of them.

End of the adventure for the breakaway.

A spokesman for Devon and Cornwall Police said: "Police and ambulance were called at 7.35am today, July 11,  following a collision between a car and a cyclist on Glenfield Road/Plymbridge Road, Plymouth.

"The male cyclist has sustained shoulder and chest injuries – severity not yet known. He has been taken to Derriford Hospital.

"The cyclist was initially trapped under the car. The vehicle was lifted off the man by members of the public.” The Liverpool Echo reports on an unusually upfront bike theft. Asked what he was doing by the victim after being caught in the act, the man raised his middle finger and said, “I’m nicking your bike mate,” before riding off down the road doing a wheelie.

The incident occurred outside a Co-op on Lark Lane in Liverpool at 3.55pm yesterday afternoon.

A spokesman for Merseyside Police, said: "We can confirm that an investigation is underway following the theft of a bicycle in Aigburth yesterday, Thursday 11 July.

"At 3.55pm, officers were called to Lark Lane to reports of a mountain bike being stolen from inside the Co-Op convenience store when an unknown person stole it.

"The suspect is described as white, 17-21 years old, 5ft 10in, of skinny build, short brown hair and wearing an orange t-shirt and green tracksuit bottoms. He made off on the bike in the direction of Sefton Park."

CCTV and witness enquiries are ongoing and anyone with information or who witnessed the incident can contact @MerPolCC, call 101 with reference 19100372674 or Crimestoppers anonymously on 0800 555 111. Regarding the story below about the New York police officer who knocked a cyclist off and then told him he did it for his own safety, Police Commissioner James O’Neill has now said that officers have the discretion to use their police vehicle to cut off a cyclist.

“NYPD officers have to use their best judgment,” he told Streets Blog NYC. “It’s not always easy to make the best decision possible when the situations are ongoing.

“Like I said before, these are very difficult jobs. It’s up to the individual officer to make that decision. Do we want them to use force? No. We want cyclists to comply.”

He added: “I understand that there is a difference between a 3,000 pound vehicle versus a 20- to 30-pound bike but there is an onus on everyone involved to operate whatever they’re driving and riding responsibly.” 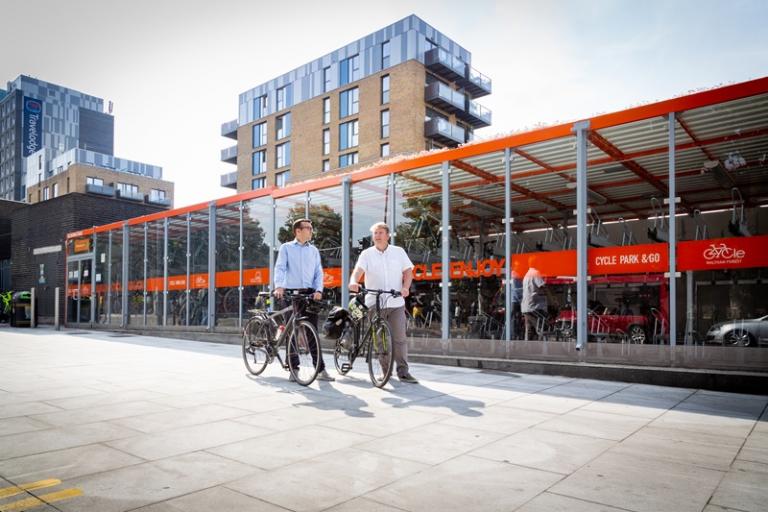 London’s going to get £2.5m worth of bike parking

Plan includes improved parking outside 10 stations in the next 12 months plus 1,400 new spaces in residential areas.

In case anyone was wondering how we warm up for stages at the Tour de France #TDF2019 #FridayMotivation pic.twitter.com/OlkkGk8f0x

Team Ineos awkwardly dancing to techno while seated, everyone. Still, nowhere near as cringe-inducing as Astana's excruciating Cycling Rap...

Streets Blog NYC reports that an NYPD officer used his SUV squad car to stop a Citi Bike rider who went through red lights with headphones on.

The Citi Bike ended up jammed inside the squad car’s rear wheel arch.

According to the police officer wearing headphones while bike riding is reckless driving and reason to run the rider off the road for running a red light @NYPDnews #citibike #bikenyc pic.twitter.com/SOWnRDhiUn

The officer responsible said the move was because the NYPD “vigorously supports Vision Zero” – which is the city’s big thing about protecting vulnerable road users.

“I put out my hand for you to stop,” he told the cyclist. “You acknowledged me, but continued to keep going.

“I yelled out, ‘Stop,’ and you looked back at me and continued to keep going.

“Then, we entered the car to stop you after viewing what I believe to be reckless activity: going through red lights, wearing two earphones.

“I followed you down St Marks Place and then you run another red light.

“Then I go over the loudspeaker and say, ‘Bicyclist, stop!’ Again, you look over and acknowledge and continue to keep going.

“Now, at this point, you’re forcibly stopped. Because now you’re riding recklessly, and you’re refusing to stop after multiple lawful orders that you acknowledged. So I am going to use whatever means necessary to stop you, OK? And that’s for your safety.” He was on a Good Morning Britain segment asking “should cyclists shop motorists?”

As has become almost boringly common in the Tour de France, new race leader Giulio Ciccone has got some yellow tat to match his yellow jersey. Here's a question for you, when did this trend for yellow parts begin?

The first tough mountain stage of this year’s Tour de France culminated with the ascent of La Planche des Belles Filles, a super steep climb with 900m of gravel track at the summit. 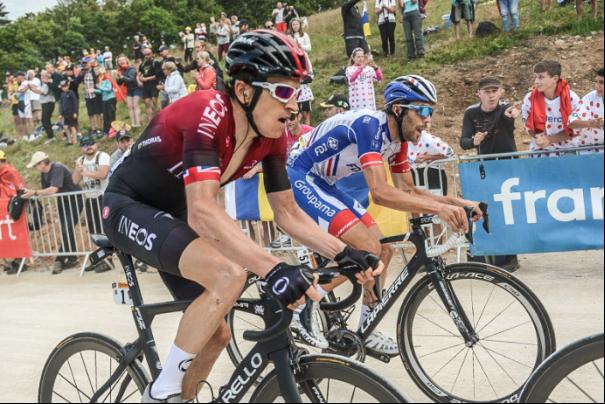 The expectation of riders switching to gravel bikes for this stage proved unfounded - the gravel track resembled smooth dirt - with all riders appeared to stick with regular bikes, instead, the 22% gradient proved the biggest challenge. As such the most obvious change was shallower carbon wheels with regular 25-26mm tyres, and Team Ineos using their Lightweight wheels that we scooped last weekend.

Longest of the race and, other thanthat, possibly also a candidate for least remarkable.

But they ran it, so this video can't get a mention in the headline.

It was for Ned Boulting's 50th. Happy birthday, Ned.

When your dreams come true.

1
Five cool things coming soon from Ribble, PNW, Wahoo, Rapha and dhb
2
Tory MP helps force removal of pop-up cycle lane in Reigate after just three days
3
Near Miss of the Day 436: "Jerk in a Jaguar" overtakes cyclist into oncoming traffic
4
How are the UK’s pop-up bike lanes being received?
5
Near Miss of the Day 435: Close pass followed by right hook
6
Near Miss of the Day 433: Police tell cyclist “We all have to share the road” after very close pass from lorry driver
7
Special-edition 25 year anniversary Shimano SPD sandals launched. Still comfort over style, then.
8
Apple Watch with cycling power estimation is a step closer to reality