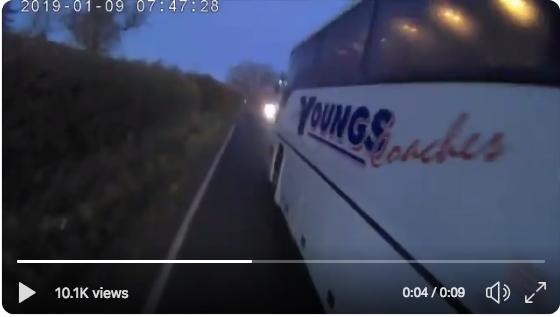 Gloucestershire Constabulary has reopened an investigation into a close pass after reviewing a telephone conversation in which the cyclist was told: "Maybe you should consider trading in your bike for a Hummer."

Matt Coldrey contacted the force with footage of a close pass executed by a George Young’s Coaches driver.

After reviewing the video, an officer told Coldrey that the driver responsible had not committed an offence because both cyclist and coach had continued on their journeys smoothly.

Coldrey told road.cc that he had taken the comment about trading his bike for a Hummer as a joke, “but as I was trying to explain to the police officer that having a coach pass me so closely that I can touch it, as traffic is travelling in the opposite direction, is at the very least careless driving, it didn't seem particularly appropriate response to my legitimate concerns."

He also says he was accused of having "a vendetta" against George Young's Coaches, because he had reported a similar incident against them in the past.

After we featured the incident and initial police response on our live blog yesterday, Gloucestershire Police's social media team said they were "looking into" the comments that were allegedly made by the officer.

A spokesperson for Gloucestershire Constabulary subsequently told road.cc: “A senior officer has reviewed the telephone conversation between the police officer and the cyclist. We believe that certain comments made by the officer during the call were unacceptable and do not represent the Constabulary's approach to road safety.

“In the call the police officer made comments they said were meant to be humorous, however it was inappropriate in the circumstances and we completely understand why the cyclist was unhappy with the conversation.

“Since this was brought to our attention we’ve reviewed the footage and believe the cyclist’s complaint is legitimate and that our initial assessment and closing of the investigation was wrong. We’ve now reopened the investigation and will look into this further.

“The senior officer has been in contact with the cyclist who has been made aware of this recent development and we have apologised for the inappropriate comments which were previously made to him.

“The officer in question will be given words of advice.

“All road users have equal rights to use the highway safely. When overtaking a cyclist, motorists are advised they should allow as much distance between them and the bike as they would a car, which is a minimum clearance of 1.5m (approximately a car door’s width).”

1
Cyclist says he was refused service at Costa Coffee drive-through – due to company policy “not to serve people on bikes”
2
UCI “kindly requests” that riders stop using race number sleeves
3
Mechanic escapes driving ban after cutting corner straight into cyclist
4
"That's why it's so shocking": Colin Strickland says on-the-run murder suspect Kaitlin Armstrong "one of the least volatile people I have ever met"
5
Cyclist "luckiest man alive" after tumbling down "crazy" brick staircase on cycle route's steep hill
6
Near Miss of the Day 789: Sensible discussion and apology follows learner close passing cyclist during driving lesson
7
Cyclist punched repeatedly by motorist in road rage incident
8
“How would you like to be on camera now?” Shirtless driver accosts CyclingMikey