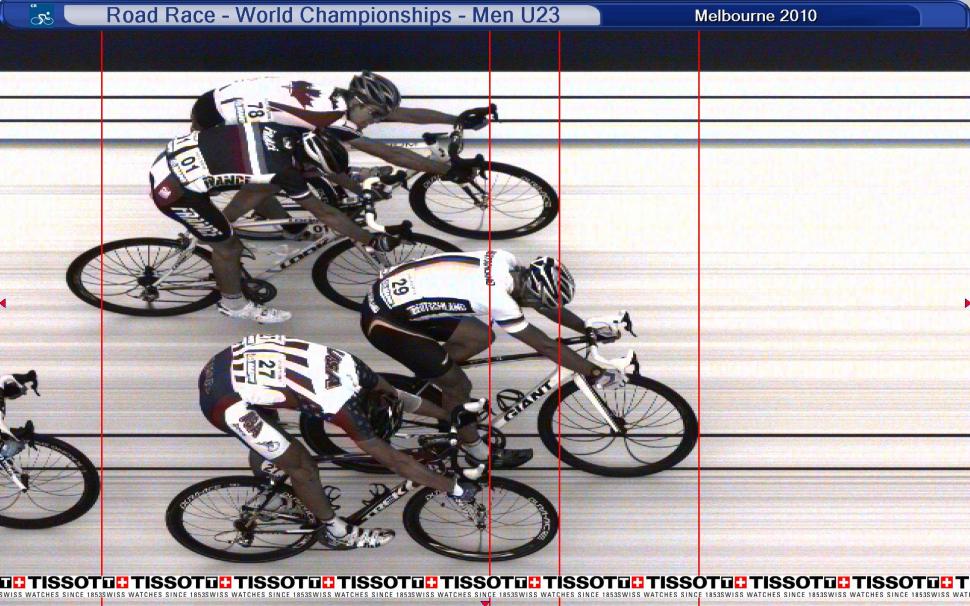 Australian gets a bit more 'bling' to go with his nickname...
by Simon_MacMichael

Michael Matthews of Australia timed his sprint perfectly to clinch the men's under-23 road race title in Geelong today, passing Germany's John Degenkolb metres from the line. Unusually, there was a tie for third place between the USA's Taylor Phinney and Canada's Guillaume Boivin - there's nothing between them in the photo-finish - the pair looking rather amused as they jointly held the bronze medal aloft.

Matthews, who only turned 20 last weekend, is set to join Rabobank for next season, and was the protected rider in the Australian squad, emerging from the bunch of 50-odd riders contesting the finale to big cheers from home fans.

The rider is nicknamed 'Bling' due to his penchant for jewellery, earrings and neck chains being his favourites apparently, and now he has a gold medal to add to his collection, plus of course a rainbow jersey to go with it.

Earlier in the 159km race, the shortest in the history of the event, there was a headache for commentators as US road race champion Ben King got off the front with the Australian rider Ben King, but those two were brought back.

Subsequently, a coupe of legendary Italian names from yesteryear, both former world road race champions, figured at the head of the race as Moreno Moser, nephew of the great Francesco, went on a solo attack on his ISD Neri team issue Cipollini bike.

The American King and Britain's Alex Dowsett got away from the group to try and bridge the gap, but they and Moser were reeled in one by one as the race moved into its penultimate lap of the 15.9km circuit.

After the bell, French rider Tony Gallopin got off the front as he had done on the previous lap, but it was always going to be a struggle to stay ahead of the chasing peloton as the riders shaped up fro the bunch sprint, the first time the race has finished in that manner since Stuttgart in 2007 when Peter Velits,the HTC-Columbia rider who finished third in last month's Vuelta, took the rainbow jersey.

1
Top American gravel racer shot dead in Texas
2
Near Miss of the Day 767: MGIF driver cuts across cyclist at speed on roundabout
3
“Maybe the easiest race I’ve ever done”: Pros enjoy relaxing Giro d’Italia stage six… but could you have kept up?
4
Near Miss of the Day 768: Driver squeezes between two cyclists – but only receives warning letter as rider didn’t “swerve”
5
What happens if you put a giant propeller on a bike? Plus new stuff from Rapha, Campagnolo, Ritchey, Selle Italia, Lezyne + more
6
Cyclist arrested after police force rider off M3 motorway
7
CeramicSpeed debuts aero rear derailleur cage
8
Near Miss of the Day 769: Punishment pass