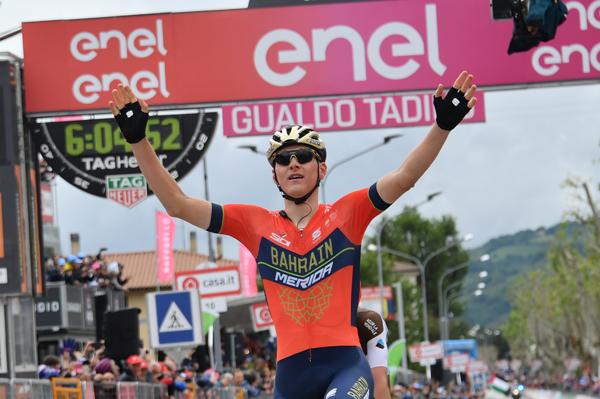 Bahrain-Merida rider Matej Mohoric has won Stage 10 of the Giro d’Italia, holding off AG2R La Mondiale’s Nico Denz at the end of what, at 244 kilometres, is the longest stage of this year’s race.

Mitchleton-Scott’s Simon Yates stays in the race leader’s Maglia Rosa and extended his lead after picking up bonus seconds at today’s intermediate sprint.

His team mate Esteban Chaves experiencing a ‘giorno senza’ – ‘an empty day’ – to see defending champion Tom Dumoulin of Team Sunweb move back into second place overall, 41 seconds down on the Lancashire rider, having got back onto the GC group after a late mechanical problem.

As today’s stage entered its final kilometre, the Slovenian rider Mohoric – a past stage winner at the Vuelta – had Denz on  his wheel.

The advantage seemed to be with the German rider, but when he tried to make the jump, Mohoric proved strong enough to hold him off.

Afterwards, he said: “It's amazing. I'm super happy for myself but, foremost, for my team Bahrain-Merida.

“They let me try and win a stage, although we're racing for Domenico Pozzovivo on GC.

“I was not confident to beat Nico Denz. That's why I tried to attack him before. When I saw that he was not passing, I gave it my all.”

Coming into the race, Mitchelton-Scott had two options for the overall, Yates and Chaves. Each has won a stage, but the Briton is now the undisputed team leader after the Colombian fell away today.

Yates said: “Chaves just had a bad moment on the first climb of the day. Straight after the rest day, you don't know how the body responds.

“I'm very disappointed for him because he's worked hard for this Giro. I was going to go for the bonus sprint because I need to gain time on Tom Dumoulin but, when I saw Thibaut Pinot getting a lead out, I went past him.

“I need as many seconds as I can get so maybe I need to go for more bonus seconds,” he added.